The Statement exhibition The Future that Was relates to experiences of time, which continue to fascinate the Dutch artist and to our ways of dealing with them when we try to arrive at a picture of the past, present or future. What if everything simply continues to repeat itself to infinity? 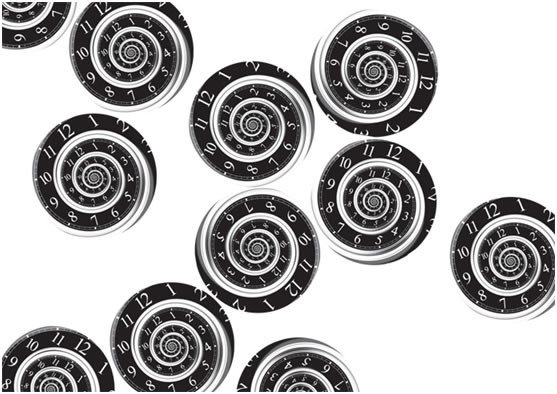 Join us at SMART Project Space for the opening of the Statement exhibition The Future That Was by the Dutch artist Gabriel Lester and to warmly celebrate the launch of our new institute NASA (New Art Space Amsterdam) with the Netherlands Institute of Media Art (NIMk). The exhibition opening is part of Museum Night 2012 which includes (sonic) performances by Florian Hecker, Germaine Kruip, Surasi Kusolwong, Mononoid, Baba Electronica & DJ Lonely + special guests.

"Why do you find this particular one so difficult to name?" she asked. "I think I've named too many," he replied, "It seems to me, I have run out of names." They converse, without looking at each other, their eyes affixed on their screens, fingers rapidly firing away letters on the keyboard. "Wasn't there a technique you used to generate possible names for these new elements?" she asked. "There is. And it still works pretty well," he replied. "A new technique perhaps? It seems to me you're sick of your own cleverness with this one," she said. "There isn't time to develop a new technique. And even if I did, I'm sure it wouldn't be good," he replied, eyes on his screen. "Revolutions take time, and you have none. So what does one do in such a situation?" she asked. He sighed, softly. He stopped typing, sat back and folded his arms. She stopped typing, and stared at him. (Heman Chong)

The Statement exhibition The Future that Was relates to experiences of time, which continue to fascinate the Dutch artist Gabriel Lester, and to our ways of dealing with them when we try to arrive at a picture of the past, present or future. What if everything simply continues to repeat itself to infinity? Taking the form of cell structures, Lester traverses the entire exhibition space with a prodigious scenographic installation that brings together some twenty artists whose work interplays between the idea of time as a linear concept and the starkly contrasting idea of cyclical time, the notion of being as an eternal recurrence. The Future that Wasseeks out the role that faith, fortune and fate play in our experience of time and space; moreover, fate that can be regarded in Nietzschean terms as Amor Fati - an embrace of what is unavoidable, or translated literally, as "love of fate".

In order to address existence as we experience it in infinite time and space, it is straightforward to begin with oneself and one’s personal experience. We breathe in and out, our heart beats, blood flows through our arteries, and our hair continues to grow. People live in this logic and know nothing more than the repetition of this process until there is a definitive end. But does anything ever absolutely come to an end? Rather than ending, perhaps things enter a domain beyond our perception, continuing to live, or appearing as a new form.

*Both the title of the show and the last paragraph of this text are from Heman Chong, and comprise his contribution to this exhibition.
----

Gabriel Lester, born 1972 in Amsterdam, The Netherlands; lives and works in Shanghai and Amsterdam. The interplay between perception, imagination, belief and desire is the driving force behind Gabriel Lester’s practice. Lester’s artworks, films and installations originate from an aspiration to tell stories and construct environments that support these stories or propose their own narrative interpretation. In early years this led to writing prose and composing electronic music. Later, after studying cinema and eventually fine arts, Lester’s artworks became what could be typified as cinematographic, without necessarily employing film or video. Like cinema, his practice has come to embrace most imaginable media and occupy both time and space. His artworks propose a tension span and are either implicitly narrative, explicitly visual or both at once. These artworks seldom convey any explicit message or singular idea, but rather propose ways to relate to the world, how it is presented and what mechanisms and components constitute our perception and understanding of it. By dissecting things, editing, cutting up, repositioning and forcing perspective, Lester’s works captivate and engage. Ultimately Lester’s artworks suggest both rational consciousness as well as associative magic thought.