Polis X is a new video by Erkka Nissinen: in this new work an assortment of humoristic and absurd characters inhabit an utopian city jokingly called Polis, pretended to be designed by Le Corbusier and Albert Speer. Also on show a new installation by the Berlin based collective Discoteca Flaming Star. 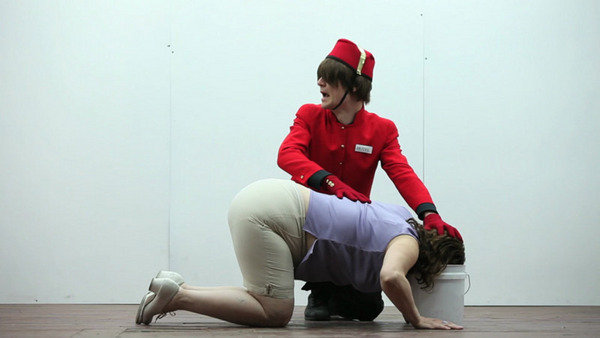 Dolores is proud to present a new installation by the Berlin based collective Discoteca Flaming Star. Founded by Cristina Gómez Barrio and Wolfgang Mayer, they work as an interdisciplinary collaborative art group, which uses songs and other forms of oral expression, understanding them as a personal response to historical events and social and political facts. They reflect upon their work by combining and recomposing it, revitalizing existing work and distilling a fresh point of view.

The installation at Dolores derives from different inspirations; Black banner III (2009) which divides the Dolores can be seen as a spatial transformation and functions as a “think-textile”. The banner contains repeatedly the words “NoBoris” which are woven in the 12 meter long textile. The text refers to Boris Lurie, one of the founders of NO!art, which found its base in 1960 in New York. Being a social art rebellion movement, its members were revolting against the capitalist art market and art system in general, stating that NO!art ‘is socially relevant, personal expression, it is social art, it is protest art, it is political art, it is anti-art.’

This social engagement is reflected in Study for Agora (Test) (2011) and the video piece Agora (2012). The work refers to the ancient Greek “agora”; the market square used as an open gathering place for discussions. With the Agora Discoteca Flaming Star has evoked this space thinking of friends engaged in a conversation while walking together. Discoteca Flaming Star creates an intangible space where the artists and the audience are welcome to think differently, each distilling its own meaning.

Ellen de Bruijne Projects is pleased to present the new video Polis X by Erkka Nissinen. In this new work an assortment of humoristic and absurd characters inhabit an utopian city jokingly called Polis, pretended to be designed by Le Corbusier and Albert Speer. The city creates a space for a series of absurdistic scenes.

The word “Polis” comes from the Greek language, meaning city or an entity composed of citizens. In the video Polis X (2012) Nissinen constructs a “kaleidoscope of human destinies” that reference the ancient Greek ideal of the city-state. Instead of depicting a perfected state of utopian community, the viewer is confronted by the obscene historical traces of mankind’s inhumanity.

The cast ranges from a plumber and a bear to porn actors and even politicians. They possess grotesque names like “Stupid Cunt”, “Pig Shit Tit Ass Sailor” and “Boring Fuck”. All inhabitants are in some way confronted with their ethical and moral position in the social construction which makes up Polis. They have to make choices about methods of interaction with other inhabitants, and decide if they want to communicate with them at all. How are groups formed, who will be excluded, and for what reason? Other inhabitants philosophize about completely different matters, like the connection between platonic solids and human characteristics, living in the now, the question about being, and the paralyzing power of the presence of unlimited possibilities.

Erkka Nissinen was born in 1975 in Finland and currently lives and works in Helsinki, Hong Kong and Amsterdam. He has studied in The Slade School of Fine Art in London and gained an MFA degree from the Academy of Fine Arts in Helsinki, Finland in 2001. In 2007 he went to Rijksakademie art residency in Amsterdam. His works have been exhibited internationally, for example in Ellen de Bruijne Project Space in Amsterdam, Smart Projects Space in Amsterdam, Helsinki City Art Museum’s Kluuvin Gallery.

During Amsterdam Art Weekend (November 29th – December 2nd 2012), there will be a new perfomance by Erkka Nissinen at Ellen de Bruijne Projects.