"Elephant in the Room" includes works by recently graduated designers from the Design Academy in Eindhoven and a series of works by Bertjan Pot. Dispersed through the space, steel constructions - gates or parts of gates in different sizes and shapes - are leaning against the walls in Edward Clydesdale Thomson's solo show, "Causa Finalis". 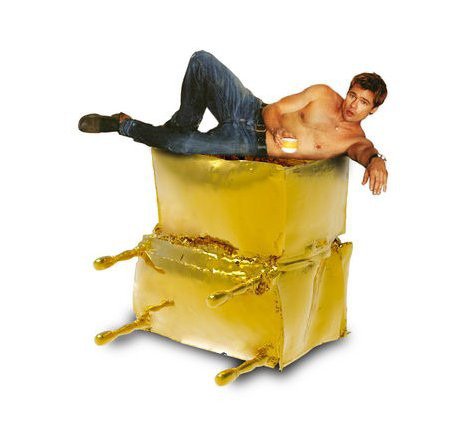 Galerie Fons Welters invites you to the exhibition ‘Causa Finalis’ by Edward Clydesdale Thomson in Playstation. Dispersed through the space, steel constructions – gates or parts of gates in different sizes and shapes – are leaning against the walls, resting on cushions, lying on the floor, and standing on top of carpets, turning the space into a temporary repository. One of the gates, blocking the passage of the gallery space, forces the visitor to pass through and as such seems to accentuate its corridor-like architecture. The structures’ forms might resemble minimalist sculpture, yet their decorative counterparts found in the textiles’ prints, give way to a different reading. In fact, through a process of abstraction and translation, Clydesdale Thomson derived these forms from the eighteenth century topiary garden designed by the Scottish architect Robert Lorimer (1864-1929) for Earlshall Castle in Scotland. At first sight, one could imagine topiary – the cutting and shaping of ever greens into specific forms – to have gone out of fashion a long time ago, as the invitation card to this exhibition perhaps indicates: in 1713, with his satirical enumeration of possible topiary, English poet Alexander Pope (1688-1744), announced a turning point in the then popular topiary. With his mock inventory: ‘The Tower of Babel, not yet finished’; ‘St George in box; his arm scarce long enough, but will be in condition to stick the dragon by next April’, he heralded a more natural form of landscaping to come into fashion, only for topiary to come back into fashion again with the Cottage Garden and the Arts and Crafts Movement, advocated a.o. by Lorimer.

What does the image we call landscape mean? How does it move between nature’s nature, a cultural construct connected to its time and preferences, and a commodified product? Questions that lie at the fore of Edward Clydesdale Thomson’s practice and his exhibition in Playstation. Understanding these questions is for the artist as political as it is aesthetical. Sharpening the boundaries of design, functionality and visual art, he at the same time opens a door to a more open reading. As such the title of this exhibition ‘Causa Finalis’ is perhaps not suggesting that it is for the sake of which everything in the production process is done, such as the yew plants being grown into certain shapes; rather this final cause seems ever changing.

Scottish/Danish artist Edward Clydesdale Thomson (1982) studied at the Piet Zwart Institute in Rotterdam, the architectural program at the Glasgow School of Art and is currently a resident at the Rijksakademie, Amsterdam. In 2011 he was awarded the Lecturis Award and nominated for the Prix de Rome. Exhibitions include ‘Secret Gardens’, TENT, Rotterdam; ‘There was a Country where They were all Thieves’, Jeanine Hofland Contemporary Art, Amsterdam; 'Borderline Picturesque & the Recounting Prospect’, Tromsø Kunstforening, Tromsø, Norway; ‘Observing Construction’, Netherlands Architectuurinstituut (NAi) Rotterdam. ‘My Travels with Barry’, Tent, Rotterdam. On Saturday 1 and Sunday 2 December his work will be shown as part of the Open Studios at the Rijksakademie.

Galerie Fons Welters is proud to invite you to the group exhibition ‘Elephant in the Room’ curated by Louise Schouwenberg. The exhibition includes works by recently graduated designers from the Design Academy in Eindhoven and a series of works by Bertjan Pot.

Pieces of furniture? Utensils? The ‘things’ in the exhibition ‘Elephant in the Room’ are located in the gray area between utility and meaning. They refer to a basic use, yet they are above all strange creatures who won’t disappear in their servile functionality, as is usually expected from utensils.
They are old, ancient even. They refer to their archetypes, and to the meanings they’ve gathered over time. These layers of meaning reach far beyond the everyday use. Cultural and social differences, prevailing ideas about taste, aesthetics and morality; things tell us something about the era and context in which they were born, but also the times in which we (re)assign value to them.
Many artists involve existing objects in their work to play with their emotional and symbolic connotations. The ever intended functionality plays only a marginal role as an idea. For designers, this balance is usually different, even though it is a very subtle difference. Designers work consciously with both connotations and denotations, the concrete, functional significance of their products. Regardless of their products actually 'functioning', the bigger stories gain substance primarily within the margins of a functional setting.
This time, a different setting has been consciously sought. Within the context of the visual arts, these peculiar ‘Elephants in the Room’ share something essential about the relationship people have with things that surround them in daily life.

In her work, Alicia Ongay Perez questions both the functional essence of existing objects, and their iconic, sculptural and symbolic meaning. How do these aspects relate to each other within the closed world of design, and what is their role in the outside world? The indefinable objects of Mathieu Frossard leave room for interpretation, both regarding their beauty and meaning, and their user value. The cabinet composed of small pieces of steel pipe by Tuomas Tolvanen, recalls not only the burned cabinet that served as a mold, but also the human condition, which is far from perfect but rather extremely fragile - a reality that is usually denied in the perfect world of contemporary design. Bertjan Pot’s masks are blindly staring at the objects that are not what they seem. Tamar Shafrir and Louise Schouwenberg edited the designers’ text fragments and wrote new lines in which they address the tension between the connotations and denotations of utensils.

*‘elephant in the room’ is a metaphor for an unavoidable truth that is usually being ignored.