Conversation One: A Preface is the second part of Wijnen's new cycle of work, entitled Sixteen Conversation on Abstraction. "Mathematics fallen off the pedestal of logic and reason, covered with the dirt of past and present, insisting on a claim to truth" F. Pisano 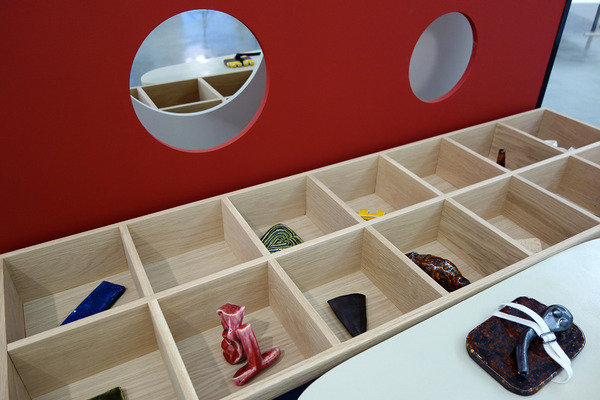 Falke Pisano
The value in mathematics

“Two years ago, by chance, I read a text about how cultural values have permeated the way we think about mathematics and mathematics education. Although I was aware of how mathematics has been instrumentalised, more often than not maintaining and pushing inequality, I realised then that I was still attached to the idea of mathematics as a universal, purely abstract – and therefore value-free – language. I even considered it as one, potentially, complete, body of knowledge. The text, which advocated an anti-racist review of maths education, offered a more complex view. In my eagerness, I absorbed this as a full antithesis: mathematics fallen off the pedestal of logic and reason, covered with the dirt of past and present, insisting on a claim to ‘truth’ that had long been revealed as a delusion. A mathematics pretending to be one perfect language developed in an almost perfect linear way, to conceal that it is in fact a set of mathematics appropriated by various groups of people throughout a series of cross-cultural encounters. Finally, a mathematics that is unable to accept that it is but one amongst many – different but equal.

Although this new outlook seemed entirely more realistic than my previous idealised conception, I felt it was necessary to (re)construct the process of thought that would lead me from one perspective to the other – to investigate the cognitive process of revision instead of simply replacing one position with another. I wanted to understand the cultural conditioning that had established my viewpoint in the first place, as much as I wanted to learn from deconstructing, step by step, the ideas at the start of it.
An accountability of sorts.”
Falke Pisano
***
This exhibition is in two parts:
Part I: 15 October – 15 November, Hollybush Gardens, London
Part II: 31 October – 19 December, Ellen de Bruijne Projects, Amsterdam

This project is kindly support by the Mondriaan Fund, Gallery at REDCAT (Los Angeles) and Synagoge de Delme (Delme)

Riet Wijnen
Conversation One: A Preface

Conversation One: A Preface is the second part of Riet Wijnen’s new cycle of work, entitled Sixteen Conversation on Abstraction. Sixteen fictional conversations, sixteen subsequent pieces, and one sculpture, are the organizing principle of this cycle. The conversations and pieces form a conceptual space, in which the term ‘abstraction’ is examined, formulated, constructed and deconstructed. Each time, a particular subject related to the concept abstraction is examined in conversations with specific people in imaginary settings. The sculpture, which also functions as a diagram, maps the connections between these different conversations.

The central subject in the exhibition Conversation One: A Preface is language. By means of a fictional conversation artists from the 30s, who all were a member of the association Abstraction Création and worked non-figuratively, try to formulate what the latter is. This in turn unravels the difficulties behind and some tactics for addressing the struggle between semantics and the concrete, that is talking about something that doesn’t want to or can’t be captured in words. To this end, one of the strategies that is used is the formulation of antithetical relations; formulating as precisely as possible what ‘it’ is by describing what ‘it’ isn’t.

The exhibition Conversation One: A Preface is based on the five editions of the cahier Abstraction Création: Art non-figuratif which were published between 1932 and 1936 in Paris by the eponymous association, uniting all art movements who worked in and advocated abstraction; the magazine formalized a new tendency for language in visual art. Wijnen initiated the reprint and first full English translation of the cahier, which was published by Kunstverein Publishing in 2014.

The first part of the cycle, Conversation Three: It Looks Like Nothing on Earth, will be shown at Stedelijk Museum Amsterdam on Thursday 29 October 8 pm and on Friday 30 October, 10 am – 6 pm.

On Saturday 28 November 5 pm Will Holder will read, or sing, the script of Conversation One: A Preface.

This exhibition is made possible with the support of Amsterdams Fonds voor de Kunst and Mondriaan Fund.