'Philip Taaffe: Anima Mundi' presents more than 30 abstract paintings from the past ten years, including many of the most striking examples of the vivid, complex imagery that characterises Taaffe's highly individual practice. Works by Albrecht Durer, Francisco de Goya, William Hogarth and Rembrandt van Rijn are all featured in Old Master Prints: The Madden Arnholz Collection. 'Mindful Media: Works from the 1970s' comprises two portfolios of etchings and photographic works by Les Levine mixing text and image to reinforce the artist's belief that social and political problems are valid concerns for art. 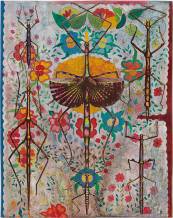 A survey exhibition of the work of the Irish-American artist Philip Taaffe, one of the most significant painters working in America today, opens to the public at the Irish Museum of Modern Art (IMMA) on Wednesday 23 March 2011. Philip Taaffe: Anima Mundi presents more than 30 abstract paintings from the past ten years, including many of the most striking examples of the vivid, complex imagery that characterises Taaffe’s highly individual practice. The exhibition also underlines the degree to which Taaffe, together with a handful of other artists, is responsible for the continuing international interest in abstraction which re-emerged in the 1990s. Other artists who have contributed to this revival include American Terry Winters and Spaniard Juan Uslé, who have also shown at IMMA.

Taaffe’s work is a veritable cornucopia of symbolism drawn from many different cultural and historical sources, including Islamic architecture, Eastern European textile design, calligraphy and information technology. His work has evolved significantly over the years since his first solo exhibition, mainly of collage works in 1982. However, his distinctive style using multiple references to create layered images of great complexity and beauty has been evident from quite early in his career. For example, although the exhibition focuses exclusively on paintings from the last ten years, echoes of earlier works, such as those from the mid-1980s that pay homage to abstract artists Bridget Riley and Barnett Newman, can be seen in Rose Nocturne (2002) and Port of Saints (2007).

Taaffe’s influences stem from his extensive travels and from his encyclopaedic knowledge of the history of image making. The titles of his works frequently refer to places, through words such as port, cape and passage. Porte Amur (2001) takes its name from the white shapes which dominate the composition, inspired by stencilled patterns on bark created by the people of the Amur River in Mongolia, one of the most northerly locations where Buddhism became established. Cape Siren (2008), the fourth in a series with imaginary capes in the title, features decorative motifs used by the native population of western Canada, where capes are a dominant geographical feature. Forms from this shamanic culture are alternated with Chinese heads and heads of mermaids and sirens of Greco-Roman origin. This work was donated to the National Collection at IMMA in 2008 by Irish collectors Lochlann and Brenda Quinn, as a Heritage Gift under Section 1003 of the Taxes Consolidation Act, 1997.

Devonian Leaves (2004) represents a further large body of work incorporating botanical references, a subject which first became important in Taaffe’s work in the 1990s. Here we see a floating, constellation-like arrangement of images of fossilised leaves from extinct plants of another geological epoch. The enamel marbled background gives the work a magma-like quality, bringing to mind the Big Bang and the origins of the universe. Other works refer to different forms of decoration. Cosmati (2007) takes its title from the Roman family who, in the 12th and 13th centuries, invented decorative, geometric designs for church floor mosaics using minute pieces of stone and coloured glass.

Although diverse in their inspiration, Taaffe’s paintings make up an unusually coherent, rewarding whole. In an essay in the exhibition catalogue, IMMA’s Director Enrique Juncosa, the curator of the exhibition, explains how Taaffe’s methods “have allowed him to develop a body of work that is visually extremely rich and highly individual. He is capable of harmoniously intermingling diverse ideas and cultural phenomena in a very open, inclusive, and seductive way, that leaves room for irony and political commentary while remaining open to interpretation by the viewer.”

Taaffe does not see style as an end in itself but rather as a means of transporting us to another perhaps more ordered and inviting place. Shortly before the first works in the current exhibition were painted he explained: “I would say that to look at a painting means that one is taken up with another reality, a pictorial fictive reality, and as such that picture represents an imaginary location. So that if one is fed up with the mundane and pedestrian experiences of life, and instead stands in front of a painting, that is a place, an imaginary construction to inhabit with one’s sensory being. To be lost inside of a painting is the crucial experience here, as an alternative to other places in the world.”

Born in 1955 in Elizabeth, New Jersey, Philip Taaffe studied at the Cooper Union in New York City. His first solo exhibition was in 1982, and his work has been included in numerous museum exhibitions, including the Carnegie International, two Sydney Biennials and three Whitney Biennials. In 2000 the IVAM museum in Valencia staged a retrospective survey of his work. Taaffe’s work has also been acquired by some of the world’s leading musuems, including The Museum of Modern Art, the Guggenheim Museum and the Whitney Museum of American Art, all in New York, and the Reina Sofía Museum in Madrid.

The exhibition is curated by Enrique Juncosa, Director of IMMA, and is accompanied by a fully-illustrated catalogue featuring texts by Enrique Juncosa and novelist and writer Colm Tóibín and an interview with Philip Taaffe by David Brody, art critic and Professor at the School of Art in the University of Washington in Seattle.

Limited Edition: Twenty signed and numbered limited edition prints by Philip Taaffe are available for sale from the opening night of the exhibition, visit www.immaeditions.ie.

Lecture: Tuesday 22 March 2011, 5.00pm, Lecture Room, IMMA
To mark the occasion of the survey exhibition, Philip Taaffe presents an artist’s talk that is followed by a wine reception and exhibition preview.

An exhibition of Old Master prints by many of the most famous artists ever to work with print-making opens to the public at the Irish Museum of Modern Art (IMMA) on Wednesday 23 March 2011. Works by Albrecht Dürer, Francisco de Goya, William Hogarth and Rembrandt van Rijn are all featured in Old Master Prints: The Madden Arnholz Collection, which is drawn from the Madden Arnholz Collection. It was donated to the Royal Hospital Kilmainham (RHK) in 1989 by Claire Madden, prior to the opening of the Museum in 1991. The exhibition is curated by Janet and John Banville.

The works included in the exhibition are by German, Flemish, Dutch and British artists, spanning the period between the beginning of the 16th century and the early 20th century. German printmakers of the Dürer period are well represented, but the most comprehensive part of the show is the remarkable group of prints by, and after, William Hogarth. While not complete, this is a valuable group, with several proofs of Hogarth’s single prints and sequences of ‘modern moral subjects’ in various states.

The Madden Arnholz Collection was generously donated by Claire Madden to the Royal Hospital in 1989 in memory of her daughter and son-in-law. It includes some 1,200 Old Master prints – the collection of engravings by Hogarth alone numbers over 500 works and is among the most comprehensive print collections in existence by the artist. The Collection also includes works donated in October 1998 following Claire Madden’s death. These include a large collection of books containing prints by the English printmaker Thomas Bewick and his family, as well as unusual versions of the prints on silk and one of Bewick’s printing blocks, of which will also be included in the exhibition.

The original Madden Arnholz Collection was first shown at the RHK in 1987 before it was donated and shown again at IMMA featuring the Hogarth prints in 2007. This exhibition consists of approximately 35 books from the Thomas Bewick collection and 80 Old Master prints.

This exhibition is supprted by the Goethe Institute.

An exhibition of works donated to the Irish Museum of Modern Art by Dublin-born artist Les Levine, opens to the public at IMMA on Wednesday 23 March 2011. Mindful Media: Works from the 1970s comprises two portfolios of etchings and photographic works mixing text and image to reinforce the artist’s belief that social and political problems are valid concerns for art.

Both works are entitled The Troubles: An Artist's Document of Ulster, 1972. The first is a group of 80 cibachrome photographs forming part of a series of works for which the artist coined the terms “media sculpture” and “media art”. The second suite of the same title comprises 18 photo-etchings made in 1979 from photographs taken in 1972.

Speaking of the photographic suite of 80 works, executed in 1972, Levine says; “The piece is extremely colourful. It deals with every aspect of the situation. It goes into Catholic homes, Protestant homes, churches, funerals, explosions...My approach was to take it from the human point of view, not the political. So in all cases, I tried to show the people involved and to evoke some state of mind that they were representing in the photo. I avoided taking sides or showing bias. I think the photos speak for themselves and tell their own extraordinary story.”

During his prolific career Levine has produced major series of works about the manifold effects and functions of the media and information systems. Since 1976 he has produced many major media campaigns throughout North America, Europe and Australia. For these works, in many cases he has used billboards in which he subverts the language of mass advertising to interrogate social and political anxieties. In most cases these billboard campaigns operate throughout an entire city virtually turning that entire city into a media sculpture. His billboard campaign, entitled Blame God, shown as part of IMMA’s From Beyond the Pale season of exhibitions in 1994, attracted huge public attention.

Les Levine was born in Dublin in 1935. At the age of eight he met the Irish painter Jack B. Yeats and remained friends with him until his death. He studied at the Central School of Arts and Crafts, London, before moving to Toronto in 1958, where he continued his studies at the New School of Art. Levine’s artistic practice incorporates various means including painting, sculpture, installation, performance work, mail art and artists’ books.

Moving to New York in the 1960s, Levine became a leading conceptual art figure, intersecting art and life in a variety of projects such as Levine’s Restaurant, 1969 and the conceptual museum he invented in 1970 The Museum of Mott Art, Inc. He also published a monthly magazine in 1969 Culture Hero. In the 1960s, Levine was one of the first artists to work with video and television. His first video tapes were produced in 1964. His work was to become a precursor to the new generation of experimental artists who were exploring the possibilities of the moving image including Dan Graham, Gary Hill and Bruce Nauman.

In 2004 Les Levine edited/curated Printed Project 04 in an issue entitled The Self Express. This presented a multi-faceted portrait of the artist conducted by 15 different interviewers. The title comes from the idea that all art is a form of self-expression. The Self Express interviews could be seen as mental portraits of the interviewers.

Levine continues to live and work in New York.