Unabkommlichkeitsbegrundungen. Redl uses marble for his sculptures: like in ancient Asian culture and antique times he breaks the terrestrial weight of his sculptures by covering them with polychrome surfaces. On show in the basement Claudia Rogge. 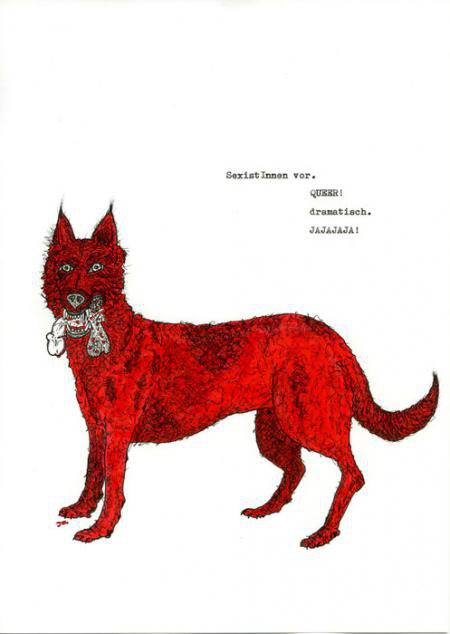 Markus Redl, born 1977 in Klosterneuburg, performs an extraordinary appearance in the young art scene in all aspects of his art. Since his debut at the Joanneum in Graz in 2005 Redl amazes the art world with his bizarre, ironic and often subversive sculptures. Exceptional as well is the material he uses - unlike other artists of his generation he works with almost obsessive passion on the most classic of all materials - the marble! (And this at a time where the sculptors by trend carve on the destruction of the classical sculpture concept by eliminating the factor of the material.) Although Redl uses marble for his sculptures he is attacking at the same time the topical positions of the classic sculpture. Like in ancient Asian culture and antique times he breaks the terrestrial weight of his sculptures by covering them with polychrome surfaces. He also incorporates outstanding topics in his art: sympathetic trivialities of the everyday life and interpersonal disputes are being conserved in noble marble stone.

Due the link of quotations and own comments that appear as inscriptions in his sculptures, Redl disposes of the weight of the stonemasons' and sculptors' heritage. His topics shouldn't be understood as volatile note but rather as a statement that is preserved in stone and often mean the opposite of what is displayed. Such as "Stone 124" which is carved out of Bianco Carrara Marmor and its inscription identifies the obese figure as "Buddha retarded" or the lifebuoy "Stone 112" which rescues the seekers of protection from drowning by means of the words "Salva Maria" - or is it in view of the weight of the material descending to the depth? Redl's works live from the dirscrepance and become the manifested "oxymoron". The oppositeness combined in one work which existst out of the contrariness of the topic and the means of design and which unmasks the banality of the banality as deceptive because it constitutes the particular.

Whereas Redl had the intention in his earlier works both thematic and in the design to attack the classic ideals of view, he dedicated himself in the last three years more intensively sublime, simple and formal strict sculptures and tried to reach the meneristic opposite pole of the figure. At the same time as his ironic critical figurative sculptures, arose a series of reduced and even abstract works which reflect the contradictoriness on a formal level. Redl expressed himself as follows: "In der Arbeit kommt es zu einem Durchlaufen eines Zyklus und dem Versuch eine Verbindung von manieriertem, eklektizistischem Realismus hin zu formstrengen Abstraktion und Leere herzustellen. (...) 'Zwei Seelen in einer Brust' sprechen lassen - um das Auflösen der Widersprüchlichkeiten im Erkennen der gegenseitigen Bedingtheit geht es mir." ("My work undergoes a cycle - from the mannered, eclectic realism to the formalistic abstraction and emptiness. (...) Two souls are in my beating in my breast - it's all about the resolution of the contrariness by recognizing their interdependence.")

On the ocassion of the second edition "Drawing Vienna" (24th until 26th of March) we show in our roomnumberOne drawings by Markus Redl which were exhibited in 2009 at the LENTOS Kunstmuseum in the exhibition "Konvergenzen von Schrift und Bild" and were published in the book "Oxymoron - ein Kind der Postmoderne - oder die Überwindung des diskursiven Denkens".