Everybody Is Possible But Nothing Is Real 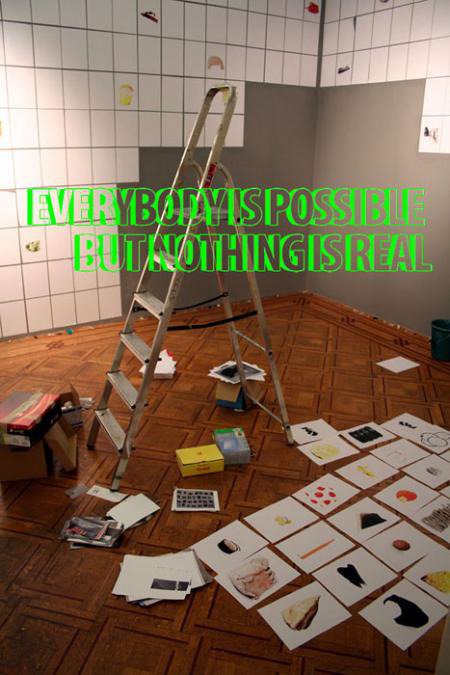 The artist's job is to build the world of tomorrow. The strategies are contradictory. Some are suggesting forms, images, ideas, while others are busy deconstructing them, pointing behind the curtain.

Some are creating forms, images and ideas, while others are busy deconstructing them, analyzing structures and processes, pointing behind the curtain. Building up and tearing down, construction and deconstruction are the major keywords within the chaotic variety of artistic strategies in the context of "Everybody Is Possible But Nothing Is Real". No matter if one is looking for meaning or unveiling its falsity, both actions are romantic in the attempt to obtain some kind of reality. The utopian gesture of pointing at brightness and claiming it's the light.

According to the title, inconsistency beats exclusivity when it comes to describing the world. Nevertheless, any conclusion is possible, one just needs to decide where to be positioned.

Romain Bailly (FR/BE)
I would like to be able to build something, but I haven't got enough interest in the finished product, in fact my work is not what it is, but what it tells. It means that the wheels I've made (I, II, III, IV) are not wheels but the circle, the endless beginning; the portrait does not represent people but the gaze, the one of fear, of hope and of sadness; Igreja is not a church but the envy of a church. I think that we can't build anything, but we are searching, and this investigation may only happen through the literary, plastic or philosophical image.

Paulien Barbas (NL)
What I want to show is the image itself. Not as a transparent medium that shows the world, but as a medium that renders reality in a specific way. The limits of photography are distorting and defamiliarizing my images and make them balance between something familiar and something new. Using existing images and works of art gives me the possibility to apply the medium for what is has been originally invented: the documentation of what's already there, with all its restrictions and possibilities.

Stefan Burger (DE/CH)
(based in Zurich) explores the medium of photography, creating fragile installations that extend into theatre-like mis-en-scène.

In recent years Stefan Burger has expanded his use of photography into wallpapers and installations, and he has taken on new media such as 16 mm film and even performance-based work. Photography is often no longer recognizable as the initial point of departure. Burger's work is a wistful investigation of production and consumption in the system of art.

At the core of the artist's work is a preoccupation with art history and theories from the academic canon, which he references and negotiates with sharp, profound, and humorous gestures that frequently shed light on the systemic principles underlying production and consumption. Stefan Burger's gaze often also turns from these art historical and theoretical manifestations to his own role as an artist and examines the expectations of and pressures on the protagonists operating in this field. Toying with a kind of detachment or ambivalence in the artists' role as producer, and touching on existential themes such as the fear of collapse or definitions of value and validity, the artist gene-rates pointed remarks with wit and incisiveness. (Freymond-Guth Fine Arts, Zurich)

Cédric Van Caeter (BE)
For the last couple of years I have travelled in Europe, Mexico and Argentina, sharing life with other travelers, friends and lovers I met. I filled diaries with dreams, medical recipes, hostel rating and poetry. I collected pictures and sounds of numerous landscapes and occasionally staged moments of intimacy. Blue Motel brings together the voice-over love story including those memories and some animated images, resulting in a grotesque fable.

Bernd Kleinheisterkamp (DE/BE)
shows a series of photographs, dealing with the appearance of things. It's a play with the variety of possible ensembles which we identify with and accept as an authentic, evident situation. Something that seems to make sense in its limits of time and context. With the help of the camera he looks for the undeniable magic inherited in all things. A useless effort to define them, to capture their essence.

Alexi Meteni's (UA/BE)
work has evolved into a "fusion style," mixing media as well as artistic language in his pieces. The paintings exhibited here, comprise his most recent work in large scale painting exploration.

Bjarke PZ Olsen (DK/BE)
"Men are from Mars, women are from Venus, get in the car and hold my penis."

Abe Rechterschot (NL/DE)
In my work I point out connections between objects, situations and their meanings. I change the hierarchic position of objects and events and reconsider their (artistic) value. I investigate a way to interpret them by documenting, presenting and redocumenting. I disorganize expectations and attach new meanings to the photographed object by changing scales and placing objects in diverse contexts. I use photography to decrypt and develop a new visual language. In my photographs I investigate the sculptural quality of everyday trivial objects. I investigate the potential of images by presenting them in installations. By small alterations I question the construction of an image, the illusion of space in a flat image, and the materiality of a photograph and the photographed subject. I cut out, scan in, rephotograph, blow up photo's and present them as, or integrate them in, 3d objects and installations. I build pedestals for objects, photographs and ideas.

Anu Vahtra (EE/NL)
The documentation of her work, in effect, is the work. Does perception exist prior to the creation of space or vice versa? (Joey Tang on culturehall.com)