Everything is Everything. In her video animated small scale buildings and locales, as well as life size installations and neon signs, Snelling's cultural references create compelling dichotomies, schisms, counterpoints and convergences. 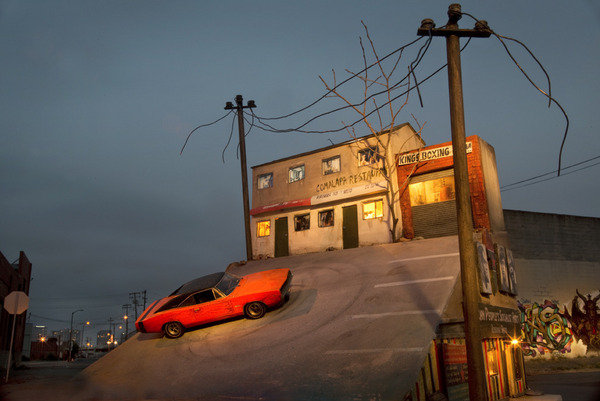 Tracey Snelling’s immersive, environmental exhibition Everything is Everything presents a significant body of new multi-media installations and sculptures, including works produced during her recent residencies in Beijing and Zhujiajiao, China. In her video animated small scale buildings and locales, as well as life size installations and neon signs, Snelling’s cultural references create compelling dichotomies, schisms, counterpoints and convergences. One such complex configuration can be seen in Oakland Sideshow (2013), in which a graffiti covered replica of a building that serves as an Upperkutz barbershop, Latin restaurant, and boxing gym, is perched atop the African People’s Socialist Party Office and a small hill where a model of a hotrod spins in place – a nod to the sideshow drag racing popular in Oakland, California. While Snelling does not attempt to recreate exact images from places she has visited, as one wanders through her installations they do begin to tell a story about her own journeys through big cities, small towns, abandoned buildings and the like. Though the origin of the places to which each work is tied is clearly understood, the viewer, nonetheless, does not only experience these installations, which incorporate miniature sculptures, projections and found objects, as being directly related to the countries that they represent. Instead, these works, when taken into consideration alongside one another, begin to form an abstracted kind of conflated version of the ways that experiences get mixed together and eventually form connections, sometimes so strongly that differentiations between one place and another that may be thousands of miles away geographically, become blurred and questioned.

With this exhibition, we see the kind of pastiche of cities, cultural iconography and the recurring significance of the souvenir or trinket that Snelling brings to our attention, which also resonates with many other aspects of contemporary life. While at once visualizing a kind of traveler’s diary or photo album, Everything is Everything also speaks to the looming sense of our shrinking world. Not only are we more easily able to see places that people in the past could only dream of going to, but even when we cannot physically set foot somewhere, we are still afforded access to myriad aspects of its culture, politics, arts and history.

In Everything is Everything, Snelling allows viewers to actuate this consistent meandering way of life in real time and space, pausing in one corner to notice the simple beauty of a whitewashed Greek souvenir sculpture, while glaring neon signs that scream southern Americana glow just above. Another mixed-media work, Communist Apartment 1 (2013), made in collaboration with artist Idan Levin, takes the form of a miniature apartment complex whose windows project video clips from Chinese and Russian films. Here images of rundown dated rooms glare out from the sculpture, bringing the piece to life with the faces of its disparate residents. Such fusions that Snelling procures only further complicate ways in which people from all over the world can often relate to one another on the simplest and most humanistic levels. Ultimately Everything is Everything, as its title implies, offers insight into ways in which fragments, as they accumulate, begin to form natural links to one another. This interconnectivity as it is strengthened over time, melds incongruous images, ideas and places into a unified vision, which, though it may take on various manifestations, still renders the same indelible message.

This is Tracey Snelling’s first personal exhibition at Aeroplastics contemporary. She has previously exhibited solo in Brussels at Taché-Levy gallery (2007 and 2009) and has already featured in two of Aeroplastics’ projects : group exhibitions “Fireflies” (Aeroplastics , Feb 2012) and “That’s all Folks!” (Belfry Stadshallen, Bruges Dec 2009- Jan 2010).