Concepts such as balance, fragmentation, deliberate distance, the distortion of vision are constantly used by Leon Vranken who also has a humorous view of the world. Jorge Mendez Blake deepens his research on literature and complexities of language by focusing on Samuel Beckett. 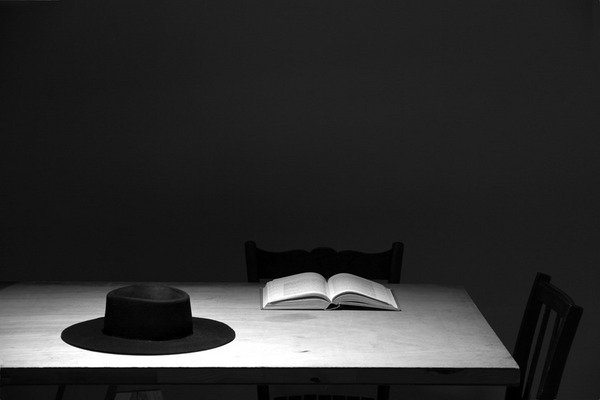 For his first solo exhibition at the gallery, Leon Vranken (born 1975) is taking over the exhibition space with a proposal that perfectly illustrates the plastic research he has been carrying out for several years. Noticed in 2009 at the Young Belgian Painters Award with an installation that destabilized the viewer's perception, Vranken is now deepening this approach by playing with perspective and the loss of contact with reality.
Paradoxically, he seems to want to help the visitor to stay in contact with reality by placing a handrail all along the exhibition walls. This invitation quickly turns absurd since the space is rather cramped and objects and frames are propped up against the handrail. The perspective is distorted, causing the viewer to doubt what he/she is seeing. The discrepancy between a real object and the representation of the same object accentuate the disorientation of the visitor and are reminiscent of what fascinated Magritte. The optical illusion is a device that pervades the history of art and Vranken gives us some splendid examples. The two large photos hung on the wall are reproductions of paintings by the artist, photographed and printed before being placed behind cut or perforated glass. Is this multiplication of filters not a splendid metaphor for the complexity with which reality can be perceived?

Concepts such as balance, fragmentation, deliberate distance, the distortion of vision are constantly used by the artist who also has a humorous view of the world as can be seen in his work/fountain, Study for a vertical line, presented in the Middelheim Museum in Antwerp.

In the centre of the spaces are scattered sculptures, whose forms refer to each other in a playful way and a showcase containing various items from the artist's studio reproduced exactly but in wood. Being shown in this way, these everyday objects (altered by traces of paint that unite them) assume an undeniable museum status. The monstration of works and objects is a subject of profound interest to the artist, and we can feel that through various pedestals (real or photographed) visible throughout the exhibition. Gifted with a remarkable talent for any type of carpentry, Vranken makes everything himself, which allows him to create all his pedestals and to have fun mixing styles and conventions. At present, in the centre of Antwerp, he is showing a sculpture/plinth to mark the 350th anniversary of the Academy, which questions the idea of the monument and its presentation to the public.

Jorge Méndez Blake
Nothing is Left to Tell

With Nothing is Left to Tell, his third exhibition at the gallery, Jorge Méndez Blake deepens his research on literature and complexities of language by focusing on the Irish writer Samuel Beckett (1906-1989), winner of the Nobel Prize for Literature in 1969. The Mexican artist based his research on the very short play Ohio Impromptu which contains some of the major Beckett themes: isolation, a communication gap, duality, rehashing of words, contemplation of emptiness, allusion to death. These themes are re-assessed throughout the exhibition through various media.

The large drawing of a curtain, the theatrical artifice par excellence, opens the question of representation: what to show/what to say? What to watch? Who to listen to? The curtain is a mask and arouses curiosity. Another question comes from the mirror, which reflects and duplicates. This mirror, often found in Méndez Blake's work, is placed on a table in closed form. Does repeating infinitely lead to dementia or an ecstatic contemplation? How to approach the couple, which is alluded to here through these two chairs next to each table but also by the photographic diptych, visible from a precise perspective? What to say to the other person? The big picture of the final page Ohio Impromptu, enlarged and drawn in fine coloured pencil, suggests that there is little that can be said with this sentence, reproduced in red, endlessly repeated throughout the piece: Nothing is Left to Tell. A certain emptiness beautifully emphasised. Language is also suggested repeatedly through a series of works on paper reproducing the words Rideau / Curtain which correspond to the words at the end of Beckett’s plays. By avoiding all text, Méndez Blake creates a fine allusion to the strangeness and abstraction of Beckett's work. The place of words and colour are chosen according to a precise logic, like the layout of the series itself (the opening itself becoming an invisible curtain).

Using a large dark velvet curtain separated into two sections, the artist installs a theatrical device that opens and closes the spoken word. This raises the more general question of representation: two large black rectangles painted on the wall act as the shadows of the curtain and a bronze hat echoes the photographic diptych. Opposite this darkness, he has spread out four large drawings of flowers growing near the artist's studio in Guadalajara. They seem to be drawn in filigree, seen through a veil (the curtain again), paying homage to Beckett's most optimistic moods; one reads in Enough: "I'm going to erase everything except the flowers. (...) Just the two of us lingering in the flowers ".