Space. About a Dream

The exhibition reflects the wide range of aesthetic, metaphoric and political dimensions associated with the idea of "outer space" as refracted in the prism of art. Focusing on present-day art, the show presents more than 50 artistic perspectives from 18 nations and 5 decades. The different media employed go to show the thematic heterogeneity of the works exhibited, from painting, 16-mm film, video, and animation film to drawings, prints, photographs, and multimedia installations. 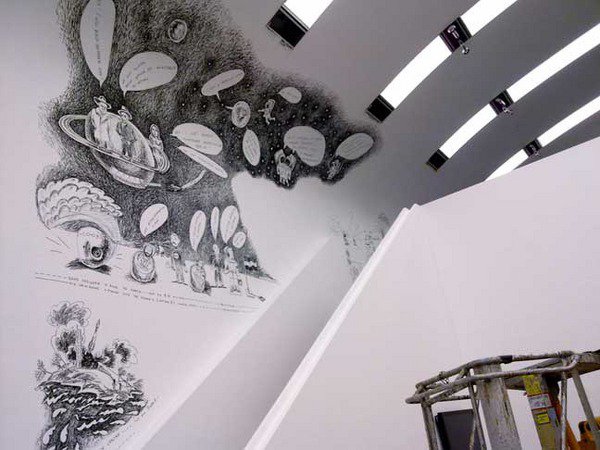 Outer space is not only a physically extending sphere, but also a symbol: for centuries, man’s dreams and visions have been concerned with conquering the “extraterrestrial zone,” with getting to know worlds beyond Earth, and even with colonizing other planets. “Space is the Place,” proclaimed the musician Sun Ra, and hundreds of science fiction novels and movies testify to this yearning for the other, for the unknown, for the abyss of infinity, which presents itself as equally tempting and threatening.
Since the production of rockets in the 20th century provided us for the first time with the possibility of actually conquering the “high frontier”, outer space turned into an emotionally charged scene of geopolitical strategy. In the Cold War between the United States of America and the Soviet Union, the fight for dominance in space had a mass- psychological and propagandist impact: after the Sputnik “crisis” of 1957 and the first manned space flight with the cosmonaut Yuri Gagarin in 1961 – the fiftieth anniversary of which provides the special occasion for this exhibition – the US invested tremendous amounts of money into the project of getting people to the moon. When they succeeded in doing so in 1969, the feat became one of the greatest media events of the twentieth century, The exhibition reflects the wide range of aesthetic, metaphoric and political dimensions associated with the idea of “outer space” as refracted in the prism of art. Outer space figures as a place of longing and a projection screen for utopias oriented toward alternative forms of life on other planets, but also as a threatening sphere triggering fears of the unknown, of impending meteor strikes, and even of invasions of aliens. The panorama of artistic explorations of the subject spans from figurative renderings of the firmament, rockets, and satellites to works critical of realism that search for ways to convey “cosmic feelings” in the tradition of such artists as Kazimir Malevich (1878–1935).

Focusing on present-day art, the exhibition presents more than fifty artistic perspectives from eighteen nations and five decades. The different media employed go to show the thematic heterogeneity of the works exhibited, from painting, 16-mm film, video, and animation film to drawings, prints, photographs, and multimedia installations. Robert Rauschenberg was one of the privileged artists present at the launch of a rocket in 1969, and in later years Lena Lapschina and Jane & Louise Wilson were also to witness such an event and reflected upon the experience in their work. NASA (National Aeronautics and Space Administration) provided Rauschenberg with detailed maps, charts, and photographs of the Apollo 11 mission in 1969/70, which served as a basis for his work Stoned Moon; this series of lithographs has rarely been presented in Europe to date. Andrei Sokolov was a close friend of the cosmonaut Alexey Leonov (the first human to conduct a space walk in 1965) and began to rely on this biographical background for his work as a painter in 1966.
In addition to about eighty works by such acclaimed artists as Turner Prize winner Keith Tyson and winner of the Vincent van Gogh Biennial Award Wilhelm Sasnal film makers like Alexandra Mir, William Kentridge, and Michael Snow, installation artists like Björn Dahlem, and intervention artists like Gianni Motti, Tom Sachs, and Rirkrit Tiravanija, Space. About a Dream also presents numerous surprising perspectives of a younger generation of artists lincluding Julieta Aranda, Loris Gréaud, Jen Liu, Amalia Pica, and Virginie Yassef.

For her series Night Sky (2007/08), the Canadian artist Angela Bulloch used a software program, to calculate views of the universe as seen from extraterrestrial perspectives and not from that of an inhabitant of the Earth. Stars in a night sky provide the Norwegian Toril Johannessen with the material for her installation Variable Stars (2009), which draws on the Harvard College Observatory’s extensive archives of photographic plates and the theory on the calculation of distances between galaxies which was developed in 1908. The point of view we are confronted with in the sculptural installation Global Globes (2010/11) by Nives Widauer is completely different: the artist has assembled a new map of the world from more than 160 different Earth globes. The overall picture is conveyed to the visitor via a live stream granting a look into the Meteorite Hall in Vienna’s Museum of Natural History.

Thanks to this collaboration with the Museum of Natural History, it will also be possible to admire three room- spanning works by the artists Artsat Pipilotti Rist, and Sylvie Fleury in the Kunsthalle Wien’s neighbor institution, namely in its entrance hall and the Meteorite Hall, which houses one of the oldest and most comprehensive collections of its kind. Wind me up, Scotty! – an exhibition presenting extraordinary space toys from the collection of Andreas Karl – will also be shown there.

Accompanying program
Besides putting the main focus on works of art and offering a comprehensive educational program for kids and young people, the project has been conceived to comprise an intense dialogue with experts in the fields of planetary geology, astronomy, space law, and related disciplines open for interested laymen and experts. The lectures and talks will take place alternately in the Museum of Natural History Vienna and the Kunsthalle Wien, as well as in a number of other co-operating institutions. A complete list of events will be available when the exhibition opens.