The exhibition challenges us to comprehend the tensions inherent in a simplified populist worldview and to consider artistic articulations of this phenomenon. The show proposes counterarguments to the populist usurpation of important social issues. 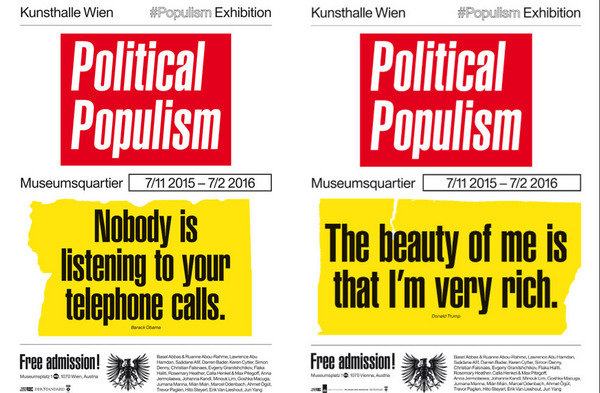 "A spectre is haunting the globe—the spectre of populism." Let us start the introductory lines to Kunsthalle Wien's upcoming exhibition Political Populism with a populist formulation, one that perverts Marx and Engels' famous opening lines of the Communist Manifesto.

Political Populism—by it's very title—plays on the power of words; the promise of a simple premise that, in truth, stretches far beyond the limits of its boundaries. In this sense the title employs the precise rhetoric of many populist parties, however the exhibition itself seeks to undermine this through content: the wide-ranging articulation of issues and responses associated with the complex and contested concept of populism.

Reading newspapers, watching television programmes and in general following current affairs undeniably transmits the feeling that something is boiling up inside the "democracies" that govern the world. This something is the populist threat. From Moscow to Shanghai, from Helsinki to Madrid, from Athens to Reykjavik, the media at home and abroad is identifying the rise of populism. Political Populism brings together a variety of international artistic responses to different populist forces at work today. Both playful and serious, subtle and provocative, the works included illustrate a differentiated picture of the political situation in particular countries and worldwide. Through their artistic positions, the artists often draw attention to the fact that in a globally networked world we share common challenges and problems. The works can be viewed as a commentary on the subject, a subversive second level, an analysis, or a footnote. Above all, they reveal how omnipresent political populism has become. Even in the field of high culture, simplistic manipulation has intensified. We endeavour, in a more or less obvious way, to provide for popular attention and success.

The exhibition Political Populism challenges us to comprehend the tensions inherent in a simplified populist worldview and to consider artistic articulations of this phenomenon. Many of the works show the complexity of issues involved and slow down developments which are handled as populist in the public debate. The exhibition questions our relation to populism, and proposes counterarguments to the populist usurpation of important social issues.

The exhibition is accompanied by a manifold program of readings, screenings, discussions, and performances. Marking the start of the program is a lecture by philosopher, curator, and director of RITS | School of Arts (Erasmus University College Brussels) Dieter Lesage on November 18, titled "On Art & Populism. Lecture for a Small Audience."

On Art and Populism. A Symposium
January 28–30, 2016
A three-day symposium will take place at the end of the exhibition and will be dedicated to the meaning of contemporary art and its challenges within this context: contemporary art is often viewed as elitist, inapprehensible, and heavily based on references. Facing this is the demand for exhibitions that appeal to the public and address broad sections of the population, as well as a demand for a general popularization of art. Which role can and should art take on this scenario? And is it at all art's mission to have a mission?
Participants and the program will be listed under www.kunsthallewien.at.