'Richard Prince: de Kooning' is an exhibition of paintings and works on paper. This coincides with 'Richard Prince: American Prayer' at the Bibliotheque nationale de France, an exhibition of American literature, ephemera and artworks from Prince's personal collection. Also on show at Gagosian Gallery Paris & Galerie Patrick Seguin an exhibition of limited edition furniture by Jean Nouvel. His non-architectural products derive from his architectural commissions or from alternative visions that correspond to his building design but which are linked to specific use. 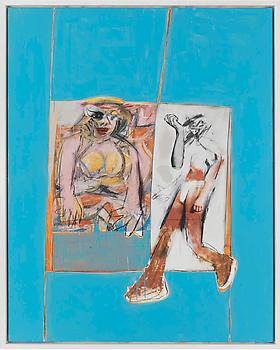 It was time to pay homage to an artist I really like. Some people worship at the altar - I believe in de Kooning.
--Richard Prince

Prince’s “de Kooning” series is a process of interaction with the canonic imagery of the Abstract Expressionist idol Willem de Kooning. The idea for these edgy Oedipal works came to him when he was leafing through a catalogue of de Kooning’s Women series. He started sketching over the paintings, sometimes drawing a man to de Kooning’s woman. As time went on, he began applying fragments of male and female torsos, genitalia, thighs, and facial features, cut and pasted from catalogues and vintage porn magazines, as well as drawing with graphite and oil crayon, adding outlines, silhouettes and textures to the original figures that further blur the distinction between de Kooning’s imagery and Prince’s own.

From these intensely worked drawings evolved a series of paintings that are, similarly, montages of elements from de Kooning's original paintings with figures cut from printed matter. The results are blown up onto large canvases via ink-jet printer, then the original material all but painted over. From the resulting abstract grounds, Prince then conjures up crude figures that recall de Kooning’s savage female subjects. The resulting hermaphroditic creatures are hybrids on several levels, merging male with female, painting with photography and print, and the refinement of modernist art with the vulgarities of mass cultural representation. Both homage and desecration, the de Kooning paintings exemplify Prince’s vision of a "Spiritual America," a historical consciousness fueled by a pervasive desire for rebellion and reinvention.

Mining images from mass media, advertising and entertainment since the late seventies, Prince has redefined the concepts of authorship, ownership, and aura. Applying his understanding of the complex transactions of representation to the making of art, he evolved a unique signature filled with echoes of other signatures yet that is unquestionably his own. An avid collector and perceptive chronicler of American subcultures and vernaculars and their role in the construction of American identity, he has probed the depths of racism, sexism, and psychosis in mainstream humor; and the mythical status of cowboys, bikers, customized cars, and celebrities. His most recent work is an explosive mix of pulp fiction, soft porn, and high art.

Richard Prince was born in 1949 in the Panama Canal Zone. His work has been the subject of major survey exhibitions, including the Whitney Museum of American Art, New York (1992); San Francisco Museum of Modern Art (1993); Museum Boijmans van Beuningen, Rotterdam(1993); Museum für Gegenwartskunst, Basel (2001, traveled to Kunsthalle Zurich and Kunstmuseum Wolfsburg); Serpentine Gallery, London (2008). The retrospective “Richard Prince: Spiritual America” opened at the Solomon R. Guggenheim Museum in 2007 and traveled to The Walker Art Center, Minneapolis in 2008. “Richard Prince: American Prayer”, an exhibition of American literature and ephemera from the artist’s collection, will be on view at the Bibliothèque nationale de France, Paris from March 29 – June 26, 2011.

“The key word of my work is elementariness. I look primarily for the essence of things; I would like to invent archetypes.”
– Jean Nouvel

Gagosian Gallery Paris is pleased to announce an exhibition of limited edition furniture by Jean Nouvel, presented in collaboration with Galerie Patrick Seguin.

Like many of his modernist predecessors who worked across related disciplines, Nouvel describes himself as an architect who also makes design. His non-architectural products derive from his architectural commissions or from alternative visions that correspond to his building design but which are linked to specific use. Regardless of the scale of the object or the architecture, Nouvel employs the same rigorous approach, imbuing the objects and accoutrements of everyday life with a lyricism that is striking and emotive yet austere and utilitarian.

La Table au Km (2008-2011) is a narrow (75cm) wooden table, made to measure, with a minimum length of 4m. (The example exhibited here measures 6m 35, according to the dimensions of the gallery). The extraordinary proportions of the table are determined by a constructive principle whereby its span is miraculously supported within the thickness of the material itself, which is a lamination of oak and hornbeam. Thus, in theory, the length of the table is limitless. The table is produced in Italy by Unifor.

Boîte à outils (1987-2011) is a storage system based on the standard toolbox that can be found in every household. Nouvel has studied and reinterpreted this utilitarian container, streamlining it while imbuing it with additional functions and attributes. The toolbox is produced in France by Decayeux.

Jean Nouvel was born in Fumel in1945 and studied at the Ecole des Beaux-Arts, Paris. A key protagonist of intellectual debate in France regarding architecture, he was a founding member of Mars 1976 and Syndicat de l’Architecture. Nouvel’s buildings include Musée du Quai Branly and Fondation Cartier pour l’art contemporain in Paris; the Congress Center in Luzern, Switzerland; the Agbar tower in Barcelona; and the Guthrie Theater, Minneapolis. The Louvre Abu Dhabi and the Paris Philharmonia at La Villette are among the projects currently in planning. Nouvel’s distinctions include the Aga Khan Award for Architecture for the Institut du Monde Arabe (1989), the Wolf Prize in Arts (2005) and the Pritzker Prize (2008). Exhibitions of his work, including the retrospective at the Centre Pompidou (2001), have been held all over the world, from New York to Rio de Janeiro and Tokyo.