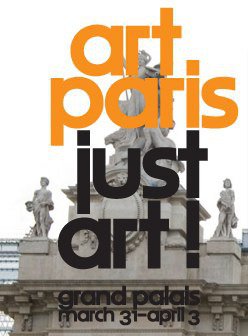 ArtParis, the Paris springtime event for the modern and contemporary art market, is returning to the Grand Palais from 31 March to 3 April 2011. For the first time in its history, ArtParis is acting on the urban public scene with Move For Life, a mobile art intervention against poverty, aids, violence, racism and environmental destruction by Littmann Kulturprojekte (Basel).

The aim of Move For Life is to create a dialogue between art and the public through major societal issues... using 13-meter trucks! From the 1st of March, 2011, 8 utility vehicles covered with the artworks crisscross the United Kingdom, Germany, Spain, France and Italy before to converge towards the Grand Palais in Paris for the opening of ArtParis, on March 30. As an engaged action, Move For Life is involving internationally renowned artists who produce socio-political “statements” capable of speaking to each and every one of us.

On the occasion of its presentation for ArtParis 2011, works by Damien Deroubaix, Isabel Muñoz, Mark Titchner and Ben Vautier are presented for the first time. These pieces joined those created by Daniele Buetti, Jochen Gerz, Attelier Van Lieshout and Robert Rauschenberg. By raising questions and triggering reflection, their creations, which express active stands, allow for a direct confrontation between art and the public at large, outside the walls of museums and galleries.

On March 30 at 1 PM these 8 lorries will drive down the Champs-Elysées before to converge towards the Grand Palais for the inauguration of ArtParis, at 1.30 PM. Throughout the duration of the art fair, some of the lorries will remain parked in front of the Grand Palais, while others will drive around Paris for the benefit of Parisians and will be located symbolic sites of the French capital.

And starting on 4 April, the Move For Life lorries will resume their travels through Europe making each of them more than 250.000 kilometres per year and reaching more than 25 million spectators, be they art lovers or not...

Some of the exhibitors of ArtParis 2011 will include: Guy Pieters, Enrico Navarra, Daniel Templon, Nathalie Obadia. Not to mention André Magnin, who will offer at his stand an immersion into Black Africa, and Hervé Perdriolle, who will give us a look at contemporary Indian art. Lastly, discover the exhibition of the Fonds Canson® pour l'Art et le Papier.

Guy Pieters gallery
Establised in Belgium and France, the Guy Pieters Gallery is going to honour the great names of contemporary art from these two neighbouring countries, specifically Belgian plastic artists Jan Fabre and Wim Delvoye, as well as French painter Robert Combas who initiated the Free Figuration movement, and French sculptor César, who will have a hen of his on display. But Guy Pieters will also offer the video installations of American Tony Oursler. Enrico Navarra gallery For ArtParis, the Enrico Navarra gallery will be showing the major works of most of the icons of the 1980s at its stand. The gallery will present a representative work from 1984 by Jean-Michel Basquiat—to whom the gallery devoted a remarkable monograph in three volumes—entitled "Porter". Alongside is a "Mao" made by Andy Warhol in 1972, and works by Keith Haring dating back to the 1980s. Apart from these unavoidable stars of the art market, we also find those currently enjoying prominence, such as photographer David Lachapelle and sculptor Jean-Pierre Raynaud.

André Magnin presents Africas
After his noted participation in ArtParis 2010, André Magnin is returning to ArtParis 2011 to offer a renewed view of contemporary creation from the African continent. Some fifteen artists, from the best known such as Chéri Samba and Frédéric Bruly Bouabré, to the youngest, such as Kura Shomali and Pathy Tshindele, who will be appearing in a show for the first time, will present their previously unshown works. Through this presentation entitled Africas, André Magnin will once again assert the diversity, power, and beauty of the creativity of Black Africa, which is known to be so dynamic.

This year, the Paris-based Daniel Templon gallery is participating in ArtParis with a selection of artists from the gallery, with the emphasis being on previously unshown works made especially for the occasion, as well as on works of seminal significance in the careers of well-established artists. In addition to the masterful work of British artist Anthony Caro, considered "the greatest living British sculptor" by Tate Britain Director Stephan Deuchar, Daniel Templon will also be showing works by French painter Philippe Cognée, installations by Brazilian artist Tunga, and photographs by American artist James Casebere, who disenchants the American dream. But Daniel Templon will also be showing new-generation artists such as Oda Jaune, a painter hailing from Bulgaria, Chilean artist Ivan Navarro and his luminous sculptures, the striking canvasses of German artist Jonathan Meese, and the paintings of Norbert Bisky, evoking socialist realism. The gallery also represents two of the most important protagonists of the contemporary Indian art scene: Atul Dodiva and Sudarshan Shetty.

Nathalie Obadia gallery
Nathalie Obadia is returning to ArtParis with a varied programme. At her stand she will be presenting the German artist Frank Nitsche, whose painting in futuristic shapes reflects a genuine work in pictorial abstraction. Also to be seen: the recent works of Joana Vasconcelos who reflects on the identity and popular culture of her country. Her sculptures and installations draw their inspiration from Portuguese kitsch and traditional imagery and lead us to reflect on the taboos of feminine sexuality, the role of women, and the consumer society. Let us not forget: the seductive works of young Indian plastic artist Rina Banerjee, who conceals an often bitter social critique which may be understood as a romantic indictment against the dilution of Indian culture in the wake of globalization. Lastly, worth a look is the work of Thomas Lerooy, born in Belgium in 1981, who, through his drawings and sculptures, develops a fantasmagorical universe that bekons the viewer to penetrate the intimate frontiers of the human being, making use of the shadows and cleavages which form the human being's physical and mental boundaries.

Contemporary Indian art presented by Hervé Perdriolle "India, like Australia, is one of the few countries offering two approaches to contemporary art. One is that of artists coming from dominant cultures, predominantly originating from the historical avant-garde. The other emanates from artists coming from minority cultures, usually of tribal origin", explains Hervé Perdriolle, who illustrates the current trend followed by major Indian collectors, such as Lekha and Anupam Poddar. For ArtParis, Hervé Perdriolle has combined a selection of works representative of urban contemporary art, including works by Ravinder Reddy, Subodh Gupta, Pushpamala N. and Anita Dube on loan from a private collector, and those of Jagannath Panda and Shilpa Gupta on loan from the Nalanga/Françoise Adamsbaum investment fund. By their side we can discover the works of historical figures and emerging artists of rural contemporary art, including works by Jivya Soma Mashe, the legendary artist of the Warli tribe, Jangarh Singh Shyam, Bhuri Baï, and Chano Devi.

For the second consecutive year, Fonds Canson® pour l'Art et le Papier will be present at ArtParis/JustArt. Fabien Mérelle, winner of the Canson® 2010 Award, will show some twenty works for the occasion at stand A25 in an exhibit entitled "Without Titles". On paper, he portrays homeless people and in so doing addresses a theme that especially affects him. Fabien Mérelle explains: "Like everyone else, I go by these people that are said to suffer the whims of existence, downtrodden, fashioned by the pain they bear like a burden. I, like the next guy, go by and look furtively at these men and women, the furniture of a carnivorous city. I proceed, but their image remains and with it the need to record their contours, too hastily perceived. These drawings are the fruit of a passerby's desire to stop walking and contemplate these Eumenides of the sidewalks, these title-less beings, these wide-open black holes in our papier-mâché decors of sheltered beings".

Special Projects
This year, and for the first time in its history, ArtParis is acting on the urban public scene with several events taking place outside the Grand Palais…

Les Nuits Parisiennes
The heart of Paris will glow with art and culture during ArtParis thanks to Les Nuits Parisiennes. An artwalk in several prestigious places in the core of Paris historical center, Les Nuits Parisiennes invite to see how a city in its reality also creates fantasy, fear, poetry, fiction, hopes... Produced by ArtParis, this project features a large number of site-specific works by artists whose practices focus on urban mythologies, small stories making the History.