The Prince of Dreams. A chronological look back at the artist's stylistic development, from blacks to colours, it will be showing 170 outstanding works (paintings, drawings, pastels and charcoal) from major French and international collections. It will also be displaying archive documents illustrating the links between Odilon Redon and the intellectuals of his time. Until 6/6: "Nature and ideal: the landscape in Rome, 1600-1650" and "Aime Cesaire, Wifredo Lam, Picasso" organised as part of 2011 Annee des Outre-mer. 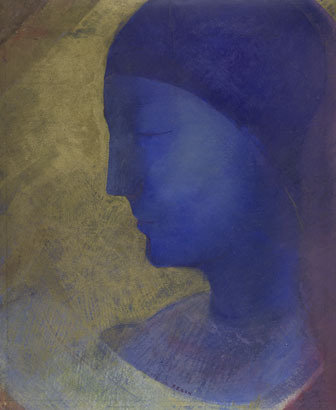 Although he was a contemporary of the Impressionists (he took part in the group’s last exhibition in 1886), Odilon Redon (Bordeaux 1840 – Paris 1916) remains the champion of mystery and the subconscious in a period which focused on reality and objectivity. One of the leaders in the art world at the turn of the nineteenth and twentieth centuries, he was a key figure in early symbolism, with his charcoals and lithographs (the famous noirs) before being admired for his pastels and paintings by the young generation of artists in love with colour, the Nabis and the Fauves. He was then regarded as one of the precursors of surrealism.

The exhibition in the Galeries nationales is a real rediscovery of this artist. A number of major exhibitions have recently been devoted to him in other parts of the world (Chicago and London, 1994; Frankfurt, 2007), but this retrospective is the first in Paris since the exhibition in the Orangerie in 1956. It is based on the study of many unpublished documents which shed new light on Redon’s work. In particular it makes systematic use of his “book of reason” (Paris, Bibliothèque littéraire Jacques Doucet), in which he jotted down the titles and dates of his works. The book will be on display and published in the appendix to the catalogue.

Some hundred and seventy paintings, pastels, charcoals and drawings, many unpublished, and a major set of engravings and lithographs (about a hundred prints, courtesy of the Bibliothèque nationale de France) are arranged in chronological order to emphasise the development in Redon’s style and themes, from the anguished period of the Noirs to the explosion of colour in his last works, in a gradual progression from shade to light. For the first time, the great mural that he painted for his patron Robert de Domecy will be displayed in its original size and layout. Redon’s work in the decorative arts will also be on show, thanks to major loans from the Mobilier national.

Despite the overall continuity of his style throughout his career, three periods can be distinguished :

1. Early years to 1890
From Redon’ youth and his training in etching under the mysterious Rodolphe Bresdin (1822-1885) in Bordeaux, until the beginning of the Noirs (charcoal drawings, lithographs) which, from his first collection of lithographs (Dans le Rêve, 1879), made his reputation in the budding symbolism movement, particularly in literary circles. Joris-Karl Huysmans (1848-1907) paid homage to him in his famous novel À rebours (Against the Grain, 1884), whose archetypal refined, decadent hero fervently collected Redon’s work. His references are Darwin and the mysteries of the origins of the world but also the sumptuous macabre works of Edgar Allen Poe and Goya. The extraordinary beauty of his lithographs is due to an accomplished technique and velvety blacks, which were said to be inimitable.

2. From 1892 the end of the century
This is the period when the dreams of the Noirs were gradually transposed into colour. Yeux clos (Closed Eyes 1890, Paris, Musée d’Orsay), of which there is a painting and a lithograph, is a turning point after which Redon approached colour in a new spirit. He used pastel with startling originality and, alongside Degas, is still one of the great masters of this medium. He became a major figure in symbolism, and mixed with Mallarmé and Gauguin.

3. Redon in the twentieth century
After 1899, Redon gave up lithography and charcoal drawing. Black and white gave way to vivid colour in increasingly large formats. Collectors competed for his mythological themes and brightly coloured flower paintings, a sign of his new peace of mind. It was during this period that Redon produced some of the great decorations which number among the lesser known masterpieces of the twentieth century, including the one in the Fontfroide abbey, which will be open to the public while the exhibition is showing at the Musée Fabre in Montpellier, in summer 2010. He won the admiration of Bonnard, Vuillard, Matisse and the Fauves and in his last years he designed tapestry cartoons for the Manufacture des Gobelins.

The exhibition focuses on a pivotal point in art history when landscape became a genre in its own right. It was in Rome, in the first half of the 17th century that the history of landscape painting began in earnest. Landscapes had, till then, simply fulfilled a decorative the development of Naturalism in Northern Europe; the development of landscapes in the neo-Venitian style in Rome between 1620 and 1630; the popularity of the Bamboccianti's painted genre scenes; the success of topographic landscapes and architectural caprices; and finally the outstanding ability to capture light and atmospheric effects.

The exhibition is organised by the Réunion des musées nationaux, and the Louvre and Prado Museums.
General Commissioner in Paris: Stéphane Loire, head curator at the Paintings Department of the Louvre Museum.

This exhibition, organised as part of 2011 Année des Outre-mer, celebrates the 70th anniversary of the happy and prolific friendship between Martinican poet Aimé Césaire (1913-2008) and Cuban painter Wifredo Lam (1902-1982). The poet spoke of their "instant rapport”, a sentiment echoed by Lam for whom the two were "artists and brothers”. In addition to Lam’s paintings and etchings, the exhibition will also feature engravings by Picasso and works by other artists inspired by Césaire’s poetry and other writings.
It should be remembered too that 2011 ushers in UNESCO’s 4-year "reconciled universal” programme built around three great twentieth century poets: Aimé Césaire, Pablo Neruda and Rabindranath Tagore.

This exhibition is organised by the Rmn-GP as part of 2011 Année des Outre-mer. The show, celebrating France’s overseas territories, will then go to Martinique and Guadeloupe.