Possible Damage: an archive of the recent student protests including an installation, performance and public interventions. Organised by Iniva's Youth Advisory Board, the Inivators, and Tania El Khoury in reponse to the Rabih Mroue' exhibition that explores politics, conflict and the relationship between personal responsibilities and the wider narratives of Lebanon and the region. A last minute intervention by the artist directly responds to current political events, the original title "I, the Undersigned" has been replaced with "The People are Demanding" and a new work produced. 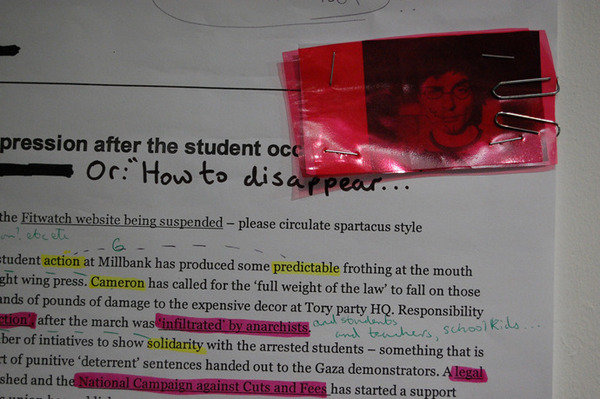 Rabih Mroue
I, the Undersigned - The People are Demanding

Iniva (Institute of International Visual Arts) presents the first solo exhibition in the UK by Lebanese artist, theatre director, playwright and actor Rabih Mroué at Rivington Place. A last minute intervention by the artist directly responds to current political events, the original title I, the Undersigned has been replaced with The People are Demanding and a new work produced.

The exhibition explores politics, conflict and the relationship between personal responsibilities and the wider narratives of Lebanon and the region.

Works featured in the exhibition:

The iconic slogan ‘The People are Demanding' is being heard in cities across the Middle East where a revolution is unfolding, and becomes the title of a new installation for the window space. Including this slogan with a list of actions, the work is an acknowledgment of the extraordinary revival of popular unity, linking the exhibition to the street and elsewhere.

On Three Posters. Reflections on a video-performance, 2004, Mroué analyses the different film takes rehearsed by one of the first suicide bombers in Lebanon, ‘'a secular warrior' against the 1985 Israeli occupation, while recording his final video confession

Grandfather, Father and Son, 2010, brings together material from the library of Mroué's grandfather, a religious scholar turned Communist, who was assassinated; a treatise written by his father during 1982, the year of the Israeli occupation of Lebanon, and a story by Rabih Mroué himself, published towards the end of the war in 1989.

Installation Je Veux Voir (I want to see), 2010, is based on Mroué's experience of co-starring with French actress Catherine Deneuve in a feature film where she went to see the aftermath of the 2007 Israeli attack on the South of Lebanon. She is accompanied by Mroué for what was his first visit back to his native village since the attack.

A programme of talks and events includes an exhibition tour with curator Francesco Bernardelli on 7 April, a panel discussion chaired by TJ Demos on The Politics of Fiction and Post-Civil War Memory Culture in Lebanon on 20 April and presentations by artists Reem Charif and Mohamad Hafeda on 28 April.

The exhibition, curated by Cosmin Costinas, is a project by BAK, basis voor actuele kunst in Utrecht, where it was on view in spring 2010. A new iteration is presented in collaboration with Iniva (23 March-14 May 2011) and includes a new commission by the artist. The project will continue to travel to a number of international venues in 2011 and 2012.

Possible Damage
The Inivators in collaboration with Tania El Khoury

Performance artist Tania El Khoury collaborates with the Inivators (Iniva's Youth Advisory Board) to present Possible Damage at Rivington Place, an exhibition and archive of London's recent student protests. Collectively they have investigated the construction of a social memory and the consequent realities. It provides a platform through which we can imagine the shared experiences, narratives and conflicts of those involved. The exhibition is accompanied by a series of events, including a public intervention and interactive performances.

Possible Damage is created in response to Lebanese artist Rabih Mroué's exhibition I, the Undersigned - The People are Demanding, also showing at the gallery (the title has changed in response to current events in the Middle East). It explores similar themes such as collective memory and questioning assumptions about truth and fiction.

"Shortly after the first of the student protests here in London, at Millbank, we realised that something had happened, something that had precipitated events that we found ourselves unsure of. Since this time, we have established ourselves as archivists and investigators of the realm of possible damage to come. The precarious nature of the objects and documents that have found their way into our hands have dubious and sometimes speculative origins." Inivators' statement

The archive brings together found, donated and created objects each contributing towards preserving a fragile memory of a particular event. The organising and indexing of the archive allows a subjective approach towards the present and recent past. Instead of presenting a set of truths, the material provokes questions about what is believable, revealing the delicate bonds of social narrative and forcing us to ask ourselves what we can trust.

Join the Inivators for Possible Damage: Re-Collection I, an experiential installation performance centred around a group the Inivators refer to as 'the disappeared' (31 March, 6:30pm), followed in April by a public intervention and performance.