Videoart in a global context - nomadic festival project touring once around the globe. For the 6th festival edition, the presentation at Arad Art Museum is containing more than 24 hours screening, featuring 235 single channel videos via screenings, projections and installations during the 3 days event. 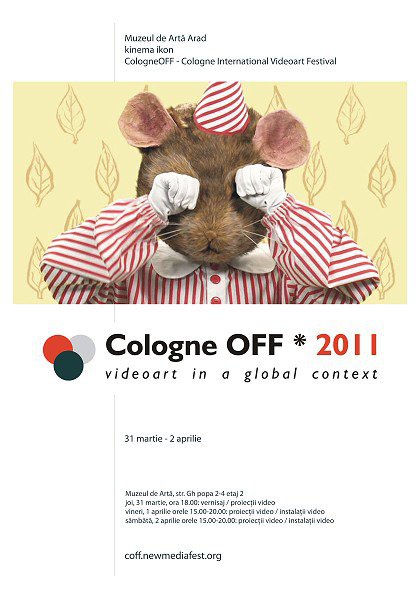 As a nomadic festival project running 12 months, CologneOFF 2011 is focussing on experimental aspects of the „global“ art medium “video” (experimental film and videoart) by spotlighting the diversity of artistic and curatorial contributions from many countries around Africa, Northern Europe, Mediterrenian, the globe. Every month of 2011 is dedicated to other geographical global regions, among them , Eastern Europe, Balkan, UK-Ireland, Latin America, Germany-Austria, France-Spain-Portugal, Middle East, Far East

as well a basic screening program to be extended and complemented by curatorial contributions of videoart, presenting and reflecting not only various views on the art medium itself, but also on the selected artists and art works intending to confront the audience a variety of artistic and curatorial approaches. The filters of 12 additional thematic projects complement the concept of presenting diversity.

While CologneOFF 2011 is present 24 hours a day on the net from 1 January 2011 on, each month physical events are scheduled at other around the globe in form of screenings, presentations and exhibitions to be complemented by lectures and workshops.

The presentation of CologneOFF 2011 ARAD at Arad Art Museum is containing more than 24 hours screening, featuring 235 single channel videos via screenings, projections and installations during the 3 days event. This will not only demonstrate the power of the presented video works, but also the power of presenting the diversity of video as an art medium practiced as a global art language.