A Century of Photographs. With 400 photographs the exhibition focuses on the dialogue between photographer and model and on the positioning of the individual in the modern society. The show presents 39 carefully chosen international artists, who through history have opened up a dialogue among themselves; they are referencing each other's work, and are received and interpreted in ever-new contexts. A project on the occasion of the 5th Photography Triennial in Hamburg. 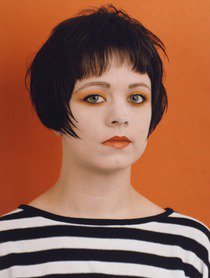 The exhibition comprises 400 exhibits and reflects on important artistic positions in photographic portraiture.

During the eventful 20th century portrait photography continually redefines itself, between dissolution of the traditional concept of the subject in the masses and the pursuit of individuality and identity – culturally, socially and in terms of gender. Portraiture is one of the traditional genres in art and was one of the driving forces behind the invention of photography in the 19th century. The image of the human being is subject to constant change, which is also reflected in photography. In postmodern society mass media create ever-changing ideals according to various requirements in tune with a quick succession of trends. Art photography responds to the changes and reflects the development sometimes with spectacular results while it questions the medium of photography itself. The exhibition presents 35 carefully chosen international artists, who through history have opened up a dialogue among themselves; they are referencing each other’s work, and are received and interpreted in ever-new contexts. On show are works by Diane Arbus, Hans-Peter Feldmann, Lee Friedlander, Nan Goldin, Roni Horn, Jürgen Klauke, Annie Leibovitz, Helmar Lerski, Irving Penn, Judith Joy Ross, Thomas Ruff, August Sander, Cindy Sherman, Andy Warhol and others. An exhibition in cooperation with the Sammlung Niedersächsische Sparkassenstiftung on the occasion of the 5th Photography Triennial in Hamburg.

“The PORTRAIT-PHOTOGRAPH is a closed field of forces. Four image-repertoires intersect here, oppose and distort each other. In front of the lens, I am at the same time: the one I think I am, the one I want others to think I am, the one the photographer thinks I am, and the one he makes use of to exhibit his art. ” (Roland Barthes, Camera Lucida, London, 1984, p. 13) The photographic portrait does indeed combine contrary interests. The relationship between photographer and sitter is crucial. The third factor is the viewer, who is already being considered during the process of photographing. In the knowledge of the particular psychological situation resulting from the presence of a camera, Richard Avedon laconically stated: “A photographic portrait is a picture of someone who knows he is being photographed.” The sitters’ reactions to the camera differ, depending on how experienced they are. Fact is: It is not possible to not communicate, as Paul Watzlawick’s research on communication shows. People demean themselves, even if they withdraw or turn away.

The confrontation climaxes in the principle of frontality, which remains valid today although it is constantly being tried and questioned. The project “Serial Portraits“ invites the visitor on a journey through time starting from the beginnings with Hermann Biow's (1804-1850) daguerreotypes, David Octavius Hill’s (1802-1870) and Robert Adamson’s (1821-1848) talbotypes up to the digital present with Michael Najjar’s (*1966) cyborgs, and wondering whether classical portraiture has come to its end.

The beginning includes a model case, where due to the long exposure necessary the models do not live out of the moment but into the moment, as Walter Benjamin said (Little History of Photography, 1931). “Thirty Minutes Dialogue von Kyungwoo Chun” (1969) from 2000 is examining the synthesis of expression, which is necessitated by the models’ keeping still for so long. An exposure time of half an hour allows the work to penetrate the depths of the pictorial space.

The creativity of the 1920s and the New Vision inspires a "visual vocabulary“ appropriate for modernity. Its different forms can be seen in the individual responses of photographers such as August Sander (1876-1964).
Being a typical studio photographer, he works on a typology of “man of the 20th century”, beginning with the agricultural type, his “Stammappe” (engl.: “Germinal Portfolio”) being a memorial to the latter. Helmar Lerski (1871-1956) takes a different stance; having originally worked in film, he is photographing his “Everyday Heads” in extreme close-ups. Making use of effective lighting in his studio, he invites unknown sitters from the street and fashions characteristic heads.

Sander’s oeuvre represents a turning point for comparative vision as a genuine principle in series. Considering photography of the 1920s and questioning the photographer’s position as well as the medium itself, author- photography in the 1970s is developing a new idea of documentary. Thomas Ruff (*1958) is testing the limits, when he presupposes that photography can merely reflect the surface of things. Bernhard Fuchs is adding a personal touch when he is seeking out the places of his own past. The great portrait photographer Irving Penn is cornering his celebrities in a corner of his studio and allows them to find their place, according to their inclinations and abilities to self-represent.

Diane Arbus (1923-1971) is holding a one-sided dialog, certainly not giving equal weight to the photographer’s interests and that of her models. While the frontality signals the conventionally due deference, the complex composition of her pictures is dominated by the superior gaze directed at the supposedly others, the freaks of bourgeois society. Until now Arbus is misinterpreted as a documentary photographer. It is being ignored that photography inevitably presents a specific view of reality and that the viewer’s position has been carefully constructed within the picture.

Only pictures that have been taken without the awareness of those represented document a found situation at the same time as they present a monologue. Heinrich Riebesehl (1938-2010) chose this method for his series “Menschen im Fahrstuhl” (engl.: “People in an Elevator”), which he completed in just one day. In a moment of pause people can reflect and are not forced to react to being observed. In his pictures the photographer respects their individuality without judging social differences.

Examples for comparability as principle in a series can be found early on. Hermann Biow’s (1804-1850) daguerreotypes as unique copies of the members of parliament in the Paulskirche in Frankfurt from 1848/1849 were later reproduced as lithographs and distributed in portfolios. These politicians were the direct successors to the galleries of ancestral portraits in stately homes, whereby the new medium was democratic. Rudolph Dührkoop’s „Hamburgische Männer und Frauen am Anfang des XX. Jahrhunderts“ (engl.: “Men and Women of Hamburg in the Early XXth Century“) represent the citizens in this tradition.

Since 1975 Nicholas Nixon (*1974) is extending the series “The Brown Sisters” every year. His study is observing changes, while Hans-Peter Feldmann (*1941) is representing a century through 101 average people in his sequence “100 Jahre” (engl.: ”100 Years”). It is fascinating, how the uniqueness of each person even if they remain anonymous is transported in the photographic portrait. Judith Joy Ross’ (*1946) series “Protesting the U. S. War in Iraq” documents a seriousness in the sitters’ faces, the political dimension of which can only be fully grasped with the information on the context. As with every photograph the title or accompanying text is part of the message.