A Portrait of the Artist As a Young Man

The artists contributing to the show treat the central theme of this autobiographical Bildungsroman in many different ways. A number of self-portraits have direct formal and/or conceptual references to Joyce - the (immigrant) artist. 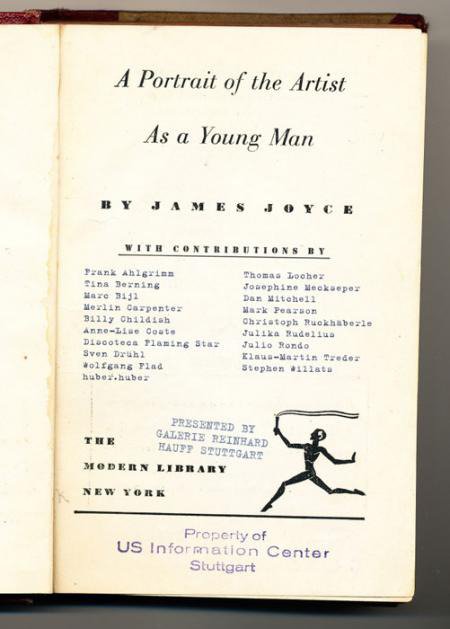 Galerie Reinhard Hauff is pleased to announce "A Portrait of the Artist As a Young Man" – a group show named after the acclaimed semi-autobiographical novel by cult artist James Joyce, published in 1916.

Joyce was born and raised in Dublin. His story describes the formative years of the life of Stephen Dedalus, Joyce's fictional alter ego. The surname Dedalus recalls the mythological figure (Daedalus), who constructed a pair of wings out of wax and feathers for himself and his son Icarus to escape the island of Crete, where they had been imprisoned. Joyce's novel traces the intellectual and religious-philosophical awakening of young Stephen Dedalus as he questions and rebels against the Catholic and Irish conventions with which he has been raised. Stephen decides to leave his home country to escape the myriad constraints of religion, nationality, and politics in his personal development, and to pursue his soaring ambitions as an artist.

The artists contributing to the show treat the central theme of this autobiographical Bildungsroman in many different ways. A number of self-portraits have direct formal and/or conceptual references to Joyce – the (immigrant) artist. Some are intimate personal works never exhibited before. Stephen Willats, for example, is represented with two early constructivist collages from 1961, in which two figures in a room, and a portrait respectively, dissolve into abstract fields. Billy Childish shows a large format portrait of the German author Hans Fallada from the 2010 Fallada Cycle, while Christoph Ruckhäberle portrays a young man in front of a colourful, geometrically patterned background. The Berlin artist duo Discoteca Flaming Star combine the film "Guadalix" with one of their White Banners, inscribed "Monsters and Miracles". Julika Rudelius has made a new photographic triptych, created during her recent stay in China.. Julio Rondo revisits abstract drawings from his adolescent boarding school years and reworks them into abstract paintings behind glass. The frictions and conflicts generated by the constraints of civic duties, professional demands and personal freedom, which Joyce discusses in his novel, are themes also treated in Frank Ahlgrimm's paintings. When social demands clash with individual preferences, the time difference between regular working days/hours and the schedule, which the inner clock, dictates lead to "Social Jetlag".

The Galerie Reinhard Hauff acknowledges with thanks the collaboration and support of all the artists and The Breeder Gallery, Athens, Galerie Freymond-Guth, Zurich, Galerie Kleindienst, Leipzig, Galerie