An exhibition that includes more than 90 artworks from Jumex collection. Glimmer proposes to vindicate the imperceptible hemorrhage designated by 'the principle of the spirit.' The exhibition is an attempt to remind us that artistic gestures still hang onto that powerful, ancient specificity: a practice of knowledge acquirable in immanence, the latent tangentiality of what the mystics called revelation. 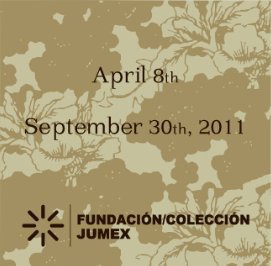 To find, beyond all the technical activity that weighs down today's human masses, that irrepressible element thanks to which man can only perfectly resemble a star.
—Georges Bataille

Glimmer proposes to vindicate the imperceptible hemorrhage designated by "the principle of the spirit." The exhibition is an attempt to remind us that artistic gestures still hang onto that powerful, ancient specificity: a practice of knowledge acquirable in immanence, the latent tangentiality of what the mystics called revelation.

Many of these works confirm that—above all—the experience of art deals with gaining access to a contagion with what remains unsaid, to penetrate the defect of its mute revelation as a vision of language, by way of its successive veils. It is not in the symbol, nor in interpretation nor in an exaltation of motive, it is not in history. The vision in art implies participation in a presence that secretes its own gnosis, and gives away—as language; ecstatic—the eloquence of the veiled to our most subtle physiology.

As such, Glimmer aspires to enjoy itself like an imperfect liturgy on the "old" domains of fragility and intimacy; it seeks to defend the inheritance of this gift for our times. The works brought together here speak of the emergence of human consciousness and of its gestures of spiritual or psychic resurrection. Some pieces achieve articulating small stories, creating communities from their potential for resistance. Not all manage to transcend their life arguments; however, they do confirm a temporality in their desire and death drives.

A bilingual Spanish/English hardcover catalogue has been published, with images of the exhibition's display by photographer Ramiro Chaves; and essays by poet Roberto Tejada, the artists Yishai Jusidman and Magali Lara, and the curator of the show.

Osvaldo Sánchez is a curator and critic based in Mexico City, where he has been Director of the Museo Carrillo Gil and Museo Tamayo. Sánchez was Artistic Director and Curator for inSite05/Art Practices in Public Domain in Tijuana San Diego. He is the Director of Museo de Arte Moderno in Mexico since 2007.

For more information and a calendar of educational activities and special events, please visit www.lacoleccionjumex.org

La Colección Jumex, one of the most important private collections of contemporary art in Latin America is owned by Eugenio Lopez Alonso. The collection is housed in one of Grupo Jumex juice factories located in Ecatepec, 45 minutes from Mexico City and consists of more than 2,400 pieces from Mexican and international artists. This collection incorporates such representative contemporary artists as Eduardo Abaroa, Francis Alÿs, Carlos Amorales, Douglas Gordon, Mike Kelley, Louise Lawler, and Gabriel Orozco among others, who have produced work since the '90s to the current day.

Fundación Jumex focuses on the development of contemporary art in Mexico, including its relation to the broader international art scene. For this reason the institution has a major program of institutional funding, individual scholarships, publications and special projects related to promotion, conservation, research, education and exhibition of contemporary art. Likewise, Fundación Jumex has an educational programming carefully designed for diverse audiences in addition to an extensive library and archive, which is one of the major resources of its kind in Mexico with more than 7,000 books and catalogues.