'The Luminous Interval' is the first large-scale presentation of the D.Daskalopoulos Collection, one of the world's most ambitious and compelling private collections of contemporary art. The exhibition features approximately 60 works by some 30 artists, encompassing a wide range of mediums, with a special emphasis on sculpture and environmental installations by eminent figures such as Matthew Barney, Louise Bourgeois, Robert Gober, Martin Kippenberger, Mike Kelley, Paul McCarthy, and Annette Messager, but also foregrounding projects by younger talents such as Paul Chan, GuytonWalker, Nate Lowman, Wangechi Mutu... 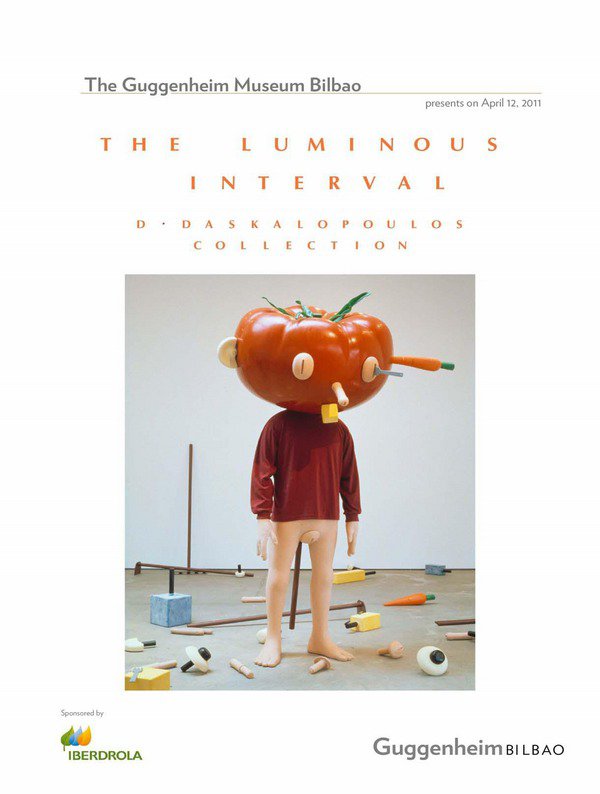 The Luminous Interval: The D.Daskalopoulos Collection is the first large-scale presentation of one of the world’s most significant private collections of contemporary art. Sponsored by Iberdrola and occupying the museum’s second floor and part of the first, the exhibition features approximately 60 works by some 30 artists, encompassing a wide range of mediums with a special emphasis on sculpture and environmental installations. Grounded in an assembly of works dating from the 1980s and 1990s by eminent figures such as Louise Bourgeois, Robert Gober, Mike Kelley, Martin Kippenberger, Paul McCarthy, Annette Messager, and Kiki Smith, but also foregrounding projects by younger talents, such as Paul Chan, Guyton\Walker, Nate Lowman, and Wangechi Mutu, the exhibition immerses visitors in a focused survey of some of the most salient artistic developments of the past few decades. The Luminous Interval: The D.Daskalopoulos Collection is curated by Nancy Spector, Deputy Director and Chief Curator, Solomon R. Guggenheim Foundation, and Katherine Brinson, Assistant Curator, Solomon R. Guggenheim Museum.

The exhibition’s title is derived from the writings of the Greek philosopher Nikos Kazantzakis (1883– 1957), whose thinking has been particularly influential for the collecting practices of Dimitris Daskalopoulos. Kazantzakis envisioned life as a “luminous interval” during which struggle and disintegration are necessary prerequisites to creative production and renewal. The Luminous Interval: The D.Daskalopoulos Collection explores this coexistence of hope and despair within the human condition, with a particular focus on concepts of alienation, trauma, corporeality, and cultural identity. The D.Daskalopoulos Collection reflects the tenor of the times, and many of the works in the exhibition confront both the crises and triumphs of contemporary life. While much of the art on view derives from or alludes to specific geopolitical or social contexts, Dimitris Daskalopoulos appreciates in this work its capacity to simultaneously broach universal themes, especially the unquestionable resilience of the human spirit.

Many of the works in the exhibition delve into prevailing narratives of national and cultural identity. Steve McQueen’s poetic study of conflicts in the Congo and Iraq (Gravesend/Unexploded, 2007), Rivane Neuenschwander’s vision of eroding continental borders (Contingent, 2008), and Nate Lowman’s seductive depictions of offshore oil rigs (Oil Riggs, 2005), all comment either obliquely or directly on the conflicts surrounding the planet’s natural resources. Kutluğ Ataman’s Küba (2004) evokes a composite portrait of what constitutes a community by focusing on the inhabitants of a slum outside Istanbul, while Paul Pfeiffer’s The Saints (2007) investigates the dynamics of the crowd through the restaging of an iconic international soccer game. Alexandros Psychoulis’s Body Milk (2003) and Walid Raad/The Atlas Group’s I Was Overcome by a Momentary Panic at the Thought that I Might Be Right (2004) present two very different abstracted depictions of the aftermaths of violence in the Middle East. Other groupings of works in the exhibition explore the most intimate aspects of individual identity, with a particular focus on the human body in varying states of repression, fecundity, and disintegration. In some cases, this is achieved through the creation of uncanny surrogates, such as Robert Gober’s transfigured sinks, cribs, and baskets, or the cast negative space of Rachel Whiteread’s studies of domestic experience. In others, including Smith’s unflinching delineations of bodily functions or Marina Abramović’s intimate, ritualistic encounter with a skeleton, a visceral sense of immediacy prevails. Yet another vein of corporeal renderings in the exhibition take an irreverently subversive approach to the subject, notably Paul McCarthy’s dismembered Tomato Head (Burgundy) (1994) and Sarah Lucas’s bathetically vanquished “bunny” in Bunny Gets Snookered #10 (1997).

The D.Daskalopoulos Collection
Actively engaged in arts patronage, Athens-based Dimitris Daskalopoulos has amassed one of the world’s most significant private collections of contemporary art, composed of more than 400 works by 170 artists. He has lent over 140 artworks to more than 120 international museums in both Europe and the United States in the past 15 years. The D.Daskalopoulos Collection gives particular prominence to large-scale installation and sculptural works as well as to film and video. Many of its ambitious and important pieces will be on display at the Guggenheim Bilbao for the first time since being acquired by the collection. Daskalopoulos is currently actively searching for a suitable site in Athens with a view to opening a permanent space for his collection in 2013/14. His objective is to create a public place to promote the idea, relevance, and enjoyment of contemporary art, with a significant emphasis on interactivity and learning.

Catalogue
The exhibition is accompanied by a fully illustrated catalogue featuring a dialogue between Nancy Spector and Dimitris Daskalopoulos about the history and spirit of the collection; essays by art critic Brian Sholis and by philosopher Simon Critchley and psychoanalyst Jamieson Webster; and detailed entries, many including new statements by the artists, discussing the works featured in the exhibition.

Guggenheim Museum
Avenida Abandoibarra, 2 - Bilbao
Tuesday to Sunday: from 10 am to 08 pm