Forever is an exhibition which brings together works by Dora Garcia, Joe Scanlan and Isidoro Valcarcel Medina. The exhibition takes the title from the work by Garcia 'Forever'. The work and the idea of 'forever' in its broadest sense is the link used to articulate the works of Scanlan and Medina in the exhibition. Every artist interpreting and playing with it in a different way. 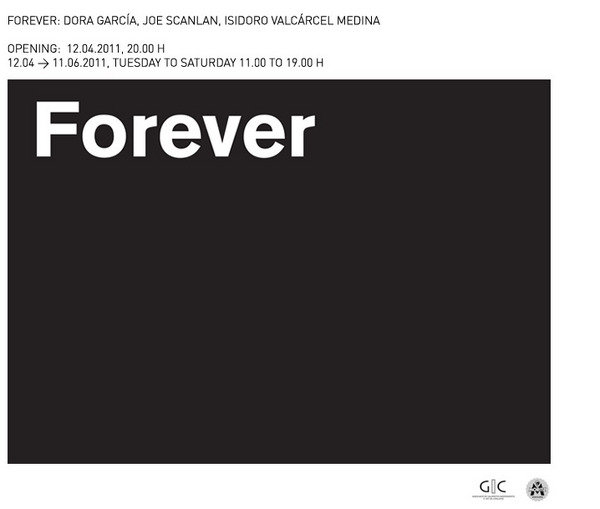 ProjecteSD is pleased to announce Forever, an exhibition which brings together works by Dora García, Joe Scanlan and Isidoro Valcárcel Medina.

The exhibition takes the title from the work by Dora García Forever. In 2005 a webcam was installed in one of the exhibitions rooms of the FRAC Lorraine, potentially allowing the artist to observe continuously and for an undetermined period of time (forever), the interior of the art center. The work deals basically with the questions of what "forever" to means to an artist, an institution, and to an art work, and deals with the possible reversal of the conventional line artist – artwork – institution – audience into audience – artwork – artist. In Forever it is the institution and the narratives it generates what becomes the subject matter of the artist's work. These narratives are presented to the public by means of an on-line diary and a series of books. A new Forever version was recently installed and developed for the New Museum in New York, in the context of the show Museum as Hub: "An accord is first and foremost only a proposition" .

Forever will be shown for the first time in Spain in its full presentation: the images currently generated at the two institutions, FRAC Lorraine in Metz and the New Museum in New York, captured in real time will be shown at ProjecteSD. The contracts signed between the institutions and the artist, and all the Forever series books published to date will be on view and available at the gallery.

The work and the idea of "forever" in its broadest sense is the link used to articulate the works of Joe Scanlan and Isidoro Valcárcel Medina in the exhibition. Every artist interpreting and playing with it in a different way.

Joe Scanlan's research in recent years reveals his constant reflection on transient and ephemeral states. This poetic dimension is always combined with a notion of critical spirit and independence. In Scanlan's body of work, the critical, metaphorical and practical components form a coherent whole. The work by Joe Scanlan at Forever, SoLongSolSoLong, was first exhibited at the Institut d'Art Contemporain (France) in 2007. Originally conceived as a specific project paying a tribute to Sol LeWitt, Joe Scanlan uses his own vocabulary to address the relation between his work and minimalism. For the presentation at ProjecteSD, Scanlan has decided to present the set of 15 silkscreened metal plates in the following letter combination: "Sssoollloonngg." The work will be installed in a way that a multiple display of the piece will be occurring during the time of the exhibition. A feature that is inherent to the work. Each visitor to the show will have the chance to see a differ ent presentation of the same work at different times all along the exhibition period.

The work of Isidoro Valcárcel Medina has never been limited to formal aestheticism. Since the seventies, his work has evolved from objects that might become art merchandise to a dematerialization encouraging the appearance of an attitude, which transforms awareness of perception, not so much into an artwork as into an art experience. That attitude is what has enabled him to interrelate life with art, and art with a provocative critical reflection on reality. For Forever, Valcárcel Medina has created a new work: Cuándo, dónde… y si es preciso, cómo (When, where…and if it is necessary, how). The work is based on a text he wrote around "forever" where he reflects and debates on the idea of "time" and "space". Notions which appear in Valcárcel Medina work in a recurrent way. The full text is displayed in vinyl letters on a table for the visitors to read. Together with it, there is a set of drawings also displayed over the table linked to some elements in t he text and that the visitors need to unfold as they read and/or play with the drawings.

The three artists presented at Forever share a similar attitude in the way they approach art practice: the reference to language and texts, the idea of temporariness, the will to extend the limits of the art object and in a way subvert art practice, and some performative aspect. This will be the first exhibition ever held of these three artists and the first presentation in Barcelona of the work of American artist Joe Scanlan.

Dora García (Valladolid, Spain, 1965) studied Fine Arts at the Universidad de Salamanca and was resident at the Rijksakademie in Amsterdam (1989–1991). Recent projects and exhibitions include Kunsthalle Bern (2010), Index (Stockholm 2010) and Schirn Kunsthalle (Frankfurt, 2009). She participated amongst others at the Lyon Biennial 2009, the Sydney Biennial 2008, and Skulptur Projekte Münster in 2007. Dora García will represent Spain at the upcoming Venice Biennial (2011) with her new project The Inadequate.

Joe Scanlan, (Circleville, USA, 1961) has presented his work throughout the United States and Europe. Scanlan has shown his work at K21 Kunstsammlung Nordrhein-Westphalen in Düsseldorf, Germany; Institut d'Art Contemporain in Villeurbanne, France; the Van Abbemuseum in Eindhoven, the Netherlands; the IKON Gallery in Birmingham, England; the Museum of Contemporary Art in Chicago; and the Museum Haus Lange in Krefeld, Germany. He also has participated in biennials in Sydney, Shanghai, Sharjah, the Baltic States and Toulouse, as well as group exhibitions at the Museum of Modern Art in San Francisco; Documenta IX in Germany; the ICA in London; and the Aperto in Venice. Scanlan is also an art critic and distinguished author who has published articles and reviews in leading international periodicals including Artforum, Art issues, Frieze and Parkett.

Isidoro Valcárcel Medina (Murcia, Spain, 1937) moved to Madrid at the age of nineteen to study Architecture and Fine Arts. From 1972 on, after taking part in the Encuentros de Pamplona on conceptual art, his work involved actions and works for public spaces. He is one of the leading Spanish Conceptualists, not only historically, but also as an artistic referent for a new generation of creators. Valcárcel Medina had a retrospective exhibition at the Tàpies Foundation in 2002, exhibitions at MACBA in 2006, and at Museo Nacional Centro de Arte Reina Sofía in 2009. In 2007 he received the Premio Nacional de Artes Plásticas and recently (2011) he was awarded in the first edition of the Premios Arte y Mecenazgo.