In the first monographic exhibition of the dutch painter's work in the United States, 33 paintings reveal his ability to capture ordinary moments of 17th-century Dutch life. The exhibition includes 14 paintings that have never been on view in the U.S. and highlights the genre painter's mastery of a wide range of subjects, techniques, and styles over the course of his career. 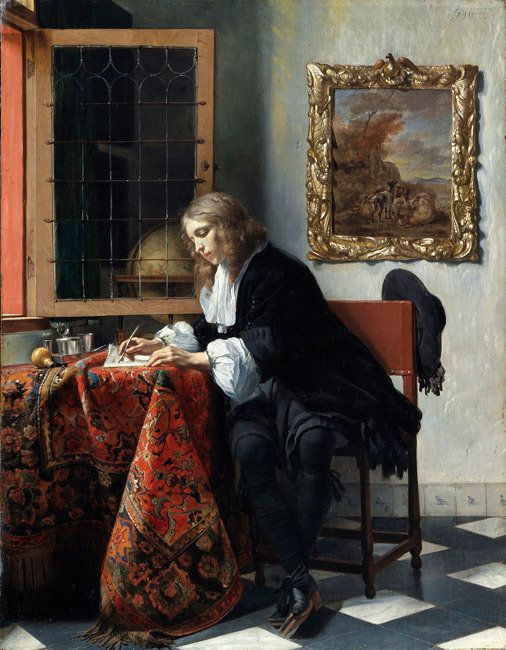 Washington, DC—In the first monographic exhibition of Gabriel Metsu's work in the United States, 33 paintings reveal the artist's extraordinary ability to capture ordinary moments of 17th-century Dutch life with spontaneity and unerring realism. On view in the East Building of the National Gallery of Art, Washington, from April 10 through July 24, 2011, Gabriel Metsu (1629–1667) includes 14 paintings that have never been on view in the U.S.

"Gabriel Metsu, one of the leading Dutch painters of the 17th century, was a gifted visual storyteller who infused his narrative paintings with suspense, drama, and emotion," said Earl A. Powell III, director, National Gallery of Art. "We are pleased to present the first retrospective on Metsu in the U.S. and we are grateful to the lenders, both public and private."

The exhibition in Washington is made possible by the Hata Stichting.

The exhibition is supported by an indemnity from the Federal Council on the Arts and the Humanities.

Organized thematically throughout two galleries, Gabriel Metsu (1629–1667) highlights the genre painter's mastery of a wide range of subjects, techniques, and styles over the course of his career.

Gabriel Metsu was most likely a prodigy, as he was referred to as a "painter" around 1644 when he was only 14 or 15 years old. Four years later he registered as a master in the artists' Guild of Saint Luke in his native Leiden. His early paintings, including religious scenes such as The Dismissal of Hagar (c. 1653–1654), are often large and boldly executed, very different in style and subject from the refined paintings typical of other artists working in Leiden at the time.

Metsu moved to Amsterdam, probably in 1654, where he specialized in scenes of daily life. Inspired by the hustle and bustle of daily life and the financial success of the city, Metsu rendered realistic portrayals of the urban landscape around him, as seen in Vegetable Market in Amsterdam (c. 1657–1661).

In 1658, Metsu married Isabella de Wolff, whom he used as a model for several paintings, including A Woman Artist or Le Corset Rouge (The Red Jacket) (c. 1661–1664) and The Artist as the Prodigal Son (1661), the latter being a popular subject for Dutch artists of the time. Metsu painted many genre scenes that focus on the daily life of the working class, such as An Old Woman Baking Pancakes, with a Boy (c. 1655–1658). In addition to the human interaction depicted, the scene incorporates still-life elements such as smoldering embers, kitchen items, and cured herrings.

At first glance, Metsu's genre scenes seem to be straightforward depictions of reality; however, many allude to a deeper, symbolic meaning that is often conveyed in beautifully rendered still lifes, and would have been recognized and understood by contemporary viewers. An Old Woman at Her Meal (c. 1654–1657) seems to be an ordinary scene of a woman in an interior, but the objects and details Metsu included in the painting evoke the Eucharist. In An Old Couple Feeding a Dog (1654–1657), the artist included objects that hint at a couple reaching the end of long, once-busy lives, and directed the viewer's attention to their interaction with the dog, representing companionship and fidelity.

Metsu's style evolved in the early 1660s as he drew upon the innovations of his contemporaries, Gerard ter Borch (1617–1681) and Johannes Vermeer (1632–1675). Like them, he began to paint in a highly refined manner and to feature the interactions of elegant people in richly furnished, light-filled interiors, seen in his greatest masterpieces, the pair A Man Writing a Letter and A Woman Reading a Letter (both dated c. 1664–1666).

Toward the end of his career Metsu, a Catholic, returned to religious themes but rendered them in his mature stylized and theatrical manner. The most striking painting of this late period, The Sick Child (c. 1664–1666), reflects his heightened spirituality where the pose is reminiscent of the Madonna and child and the Pietà. Although he died at the age of 38 at the height of his career, Metsu secured his place among the great Dutch masters through his ability to capture 17th-century life with freshness and vigor.

National Gallery of Art
4th Street and Constitution Avenue - Washington
open: Monday through Saturday from 10:00 a.m. to 5:00 p.m
Sunday from 11:00 a.m. to 6:00 p.m
The Gallery is closed on December 25 and January 1
Admission free