Fluxus and the Essential Questions of Life

Fluxus was an international network of artists, composers, and designers that emerged as an art (or -anti-art) phenomenon in the early 1960s and was noted for blurring the boundaries between art and life. Over 100 works by George Maciunas and other artists, including, among many others, George Brecht, Ben Vautier, Yoko Ono, Robert Filliou, Nam June Paik, La Monte Young, Mieko Shiomi, and Ken Friedman, playfully supply answers to 14 themes, framed as questions, such as -What Am I?,-Happiness?,-Health?, -Freedom?, and -Danger? 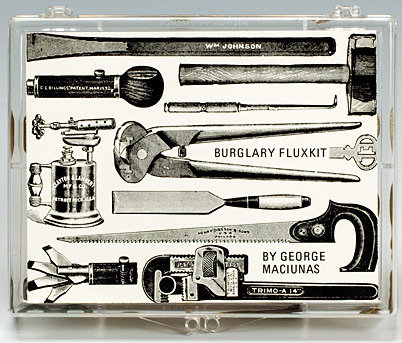 One of the things—maybe the most important thing—that art is good for is thinking about life. Fluxus and the Essential Questions of Life, a major traveling exhibition based on the Hood Museum of Art’s George Maciunas Memorial Collection of Fluxus art, is designed for visitors to experience the radical and influential cultural development that was Fluxus, and maybe learn something about themselves along the way. Fluxus was an international network of artists, composers, and designers that emerged as an art (or ―anti-art) phenomenon in the early 1960s and was noted for blurring the boundaries between art and life. The Hood’s exhibition runs from April 16 through August 7, 2011, with a public keynote lecture by exhibition guest curator (and founding Hood director) Jacquelynn Baas on May 6 at 4:30 PM.

George Maciunas (1931–1978), the Lithuanian-born organizer of the international Fluxus movement, reacted against the ―high art world and its intense commodification of art objects. He saw art, at its best, as part of the social process and attempted to create objects that celebrated collaboration, the ephemeral, and the everyday—with a touch of playful anarchy. Circumventing both aesthetics and the commercial art world, Maciunas wanted to empower all people to engage with essential issues via the Fluxus approach to life.

Fluxus and the Essential Questions of Life takes Maciunas’s approach as a touchstone. The exhibition is about how Fluxus works, and it encourages visitor interpretation and response through its design and layout. Over one hundred works by Maciunas and other Fluxus artists, including, among many others, George Brecht, Ben Vautier, Yoko Ono, Robert Filliou, Nam June Paik, La Monte Young, Mieko Shiomi, and Ken Friedman, playfully supply answers to fourteen themes, framed as questions, such as ―What Am I?, ―Happiness?, ―Health?, ―Freedom?, and ―Danger? A free newspaper containing a map of the exhibition will allow visitors to go directly to those questions of most pressing interest to themselves.

The objects elaborate upon the themes in various ways. Regarding ―Happiness?, Bici Forbes’s (now Nye Ffarrabas) Stress Formula proposes that we need more jokes than drugs. A vitamin bottle whose label is inscribed with the suggested dosage, ―Take one capsule every four hours, for laughs, Stress Formula contains clear capsules with little rolled pieces of paper, presumably printed with humorous messages. Fluxus artists seem to agree that happiness is something we make for ourselves, not the result of something that happens to us.

Regarding ―Change?, Fluxus artists conclude that going with it can be a lot more fun than trying to fight it. As Ken Friedman suggests with his Flux Corsage (a plastic box filled with flower seeds), you might get started by getting yourself some flower seeds, planting and nurturing them, and giving the blossoms to someone you love. The plant will die eventually and so might your love, but neither of them will disappear; they will change into some other form of energy.

Fluxus introduced two new things into the world of art, both integral to the exhibition: event scores and art-as-games-in-a-box, many of which were gathered into ―Fluxkits along with other ephemera. The idea was to sell these kits at low prices—not through galleries but by mail and through artist-run stores. The events were even more accessible. Sometimes consisting of just one word—such as George Brecht’s ―Exit, included in the exhibition in the section titled ―Death?—Fluxus events could be performed by anyone, anyplace.

The essential function of Fluxus artworks is to help us practice life; what we ―learn from Fluxus is how to preform as an ever-changing self in an ever-changing world—and that a sense of humor helps.

The accompanying catalogue is conceived as an art self-help book that will be of interest to students and the general public as well as to scholars. The book, co-published by Dartmouth College and the University of Chicago Press, contains an introduction by Jacquelynn Baas and essays by Baas, Fluxus artist Ken Friedman, and scholars Hannah Higgins and Jacob Proctor. After closing at Dartmouth, Fluxus and the Essential Questions of Life travels to the Grey Art Gallery at New York University, September 9–December 3, 2011, and to the University of Michigan Museum of Art in Ann Arbor, February 25–May 20, 2012.

This exhibition and the accompanying full-color catalogue were organized by the Hood Museum of Art and were generously supported by Constance and Walter Burke, Class of 1944, the Ray Winfield Smith 1918 Fund, and the Marie-Louise and Samuel R. Rosenthal Fund.

About the Hood Museum of Art
The Hood Museum of Art is dedicated to teaching and promoting visual literacy for all of its visitors. This dynamic educational and cultural facility houses one of the oldest and largest college collections in the country, with more than 65,000 objects acquired since 1772. Among its most important works are six Assyrian stone reliefs that date from around 900 BCE. The collection also presents art from other ancient cultures, the Americas, Europe, Africa, Papua New Guinea, and many more regions of the world. The Hood seeks to inspire and educate through direct engagement with works of art and offers access to the rich diversity of its collections through ongoing highlights displays, special exhibitions, an online collections database, and a wide array of programs and events.