L'amour fou. The show brings together the paintings, drawings, sculptures, and prints inspired by one of Picasso's most ideal models and enduring passions. The exhibition spans the years 1927 to 1940 and includes several works never before seen in the United States: a group of more than eighty works to show a range of Marie-Therese's influence within Picasso's imagery, beyond recent headline-grabbing portraits. 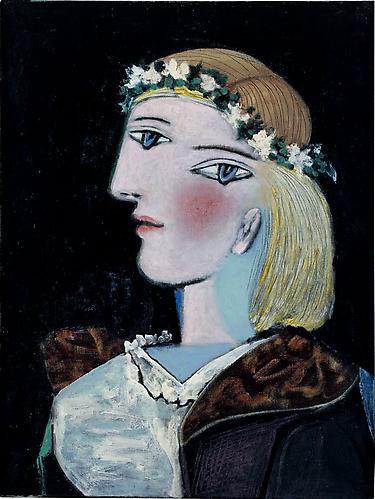 You have an interesting face. I would like to do your portrait. I have a feeling we will do great things together.--Pablo Picasso

Following the critical and popular success of Picasso: Mosqueteros in New York in 2009 and Picasso: The Mediterranean Years in London in 2010, Gagosian Gallery is pleased to present the next chapter in an ongoing exploration of Picasso’s principal themes. Picasso and Marie-Thérèse: L’amour fou brings together the paintings, drawings, sculptures, and prints inspired by one of Picasso’s most ideal models and enduring passions. The exhibition is curated by the eminent Picasso biographer, John Richardson, together with Marie-Thérèse’s granddaughter, art historian Diana Widmaier Picasso, who is currently preparing a catalogue raisonné of Picasso’s sculptures.

In 1927, on a street in Paris, Picasso encountered the unassuming girl, just shy of eighteen years old, who would become his lover and one of modern art’s most famous muses. “I am Picasso” he announced. The name meant nothing to Marie-Thérèse so he took her to a bookshop to show her a monograph of his paintings and asked if he could see her again. Flattered and curious, she agreed, and thus began a secret love affair that would establish Marie-Thérèse as the primary inspiration for Picasso’s most daring aesthetic experiments in the decade to come.

More than any other woman that Picasso desired and painted, Marie-Thérèse, with her statuesque body and strong, pure profile, fueled his imagination with a luminous dream of youth. Although her first appearances in his work were veiled references with her initials forming spare linear compositions, such as in the earliest work in the exhibition, Guitare à la main blanche (1927), the arrival of the blond goddess’s likeness in his art announced a new love in his life. In portrayals, Picasso would stretch her robust athletic form to new extremes, metamorphosing her in endlessly inventive ways. She became the catalyst for some of his most exceptional work, from groundbreaking paintings to an inspired return to sculpture in the 1930s, according her an almost mythic stature and earning her immortality as an art historical subject. Yet her true identity remained a secret from even Picasso’s closest friends. Even after Marie-Thérèse bore their daughter Maya in 1935, Picasso would continue to divide his time between his professional life as the most famous artist in the world, and his secret family life, spending Thursdays and weekends with her and Maya and amassing a trove of love letters and snapshots exchanged while they were apart.

The exhibition spans the years 1927 to 1940 and includes several works never before seen in the United States. The curators have assembled the group of more than eighty works to show a rarely articulated range of Marie-Thérèse’s influence within Picasso’s imagery, beyond recent headline-grabbing portraits. The exhibition is accompanied by a fully illustrated catalogue with a new biographical essay by John Richardson, and Diana Widmaier Picasso’s revelatory essay exploring Picasso’s portraiture, which includes dozens of never before published photographs of Marie-Thérèse from the family archives. Elizabeth Cowling, Professor Emeritus of History of Art at Edinburgh University and co-curator of the historic exhibition “Matisse Picasso” (2002-03), has contributed an essay that examines the dissemination of images of Picasso’s sculptures through the art journals of the period.

To show Picasso’s work in a downtown contemporary art gallery creates a context that evokes the original challenges that his art presented in his own time while celebrating its enduring significance in our own. Under the direction of Valentina Castellani and installed in a dynamic transformation of the 21st Street gallery by architect Annabelle Selldorf, this unprecedented exhibition of the period will reveal Picasso’s secret muse and his l'amour fou Marie-Thérèse in a dramatic new light.

For further information please contact the gallery at newyork@gagosian.com or at 212.741.1717.