Wed-Sun 11am-6pm and by appointment 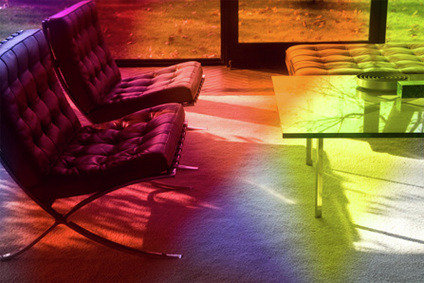 Taken over the course of three years (2006–2009), these photographs were made using a digital camera and the resulting images capture the architectural features of Johnson’s 47-acre compound. In addition to the Glass House, Welling photographed the Brick Guest House (1949), the Lake Pavilion (1962) and the Lincoln Kirstein sculpture (1985) on the grounds of the estate. To achieve his luminous effects the artist placed a variety of coloured filters between lens and subject to introduce intense fields of colour, transforming the image at the moment of exposure.

In this new body of large-scale inkjet prints Welling continues to explore his longtime interest in colour phenomena and trichromatic (RGB) vision, the process by which our eyes and brain work together to perceive the visible spectrum. Welling first examined these ideas in 2005 with his Hexachromes, images of succulents photographed through coloured filters. Begun at the same time as these works, the Glass House images were produced using many of the same filter combinations and layering effects.

In a statement on Glass House, Welling elaborates on the physical and conceptual properties of his interventions:

I’ve been using the word “filter” as a noun but it’s also a verb. A filter lets some wavelengths of light through and certain kinds of information to seep in. In addition to plastic, coloured filters, I introduced clear glass, clear plastic, fogged plastic, pieces of glass that were slightly uneven and tinted, and finally a diffraction filter that breaks light into the spectrum.

Although the Glass House is symmetrical (the front is the same as the back), I prefer a frontal view because you can see through the house to the landscape directly west. This is the aspect of the house that is perhaps most fascinating to me. This big glass box, plunked down in the Connecticut landscape, seems like a conceptual sculpture, a gigantic lens in the landscape. When I realised I could make the glass red or add reflections to the face of this supposedly transparent house, my project became a laboratory for ideas about transparency, reflectivity, and colour.

Displaying a productive disregard for the internal norms of photography, Welling harnesses the elemental components of the medium –– light, colour, and movement –– to produce distinctly original work, while remaining keenly aware of photography’s history. His experimental approach and sensitivity to the physical and technical properties of his medium has influenced an entire generation of younger artists. Welling’s early abstract works implemented such simple materials as crumpled aluminum foil, draped velvet, pastry dough, and gelatin, while other works abandoned the camera altogether. Photograms made from strips of cut paper or flower blossoms appeared in his later work, as well as the artist’s experiments with layered exposures and filters, evidencing Welling’s ongoing interest in testing the capabilities of his apparatus.

The Glass House works fuse the artist’s attraction to surface materiality with his interest in the visual experience of abstraction. The reflective, transparent façade of Johnson’s diaphanous structure knit light, interior, and exterior together to describe architectural space, allowing Welling’s layered photographs to inhabit multiple physical and chromatic dimensions.


James Welling (b. 1951, Hartford, Connecticut) received his B.F.A. and an M.F.A. from the California Institute of the Arts, where he worked primarily in video, studying with Wolfgang Stoerchle, Dan Graham and John Baldessari. Emerging in the late 1970s, Welling came to be known as an artist for whom photographic norms and the representational field itself were (and remain) not a given, but rather a field of contest between different formal languages. In 1995 Welling became the head of the photography area in the Department of Art at UCLA.

Welling’s work has been exhibited widely throughout Europe and North America. Glass House formed part of After Architects, a group show highlighting artists whose work approaches architecture and design, at the Kunsthalle Basel (28 March – 24 May, 2010). He participated in How Many Billboards? Art In Stead, a project conceived by MAK Center for Art and Architecture, in which twenty-one billboards featuring newly commissioned artworks were on view throughout Los Angeles (February–March 2010).

In 2009, Welling’s work was included in the critically acclaimed historical survey, The Pictures Generation, 1974–1984 at the Metropolitan Museum of Art, New York, and in 2008 he participated in the Whitney Biennial. Other recent exhibitions include The Los Angeles Art Scene: 1955–1985 at the Centre George Pompidou and Tomorrowland: CalArts in Moving Pictures at The Museum of Modern Art, New York (both 2006). Welling was the focus of solo shows at the Palais des Beaux-Arts, Brussels (2002); Sprengel Museum Hannover (1999); Carnegie Museum of Art, Pittsburgh; and Kunstmuseum Luzern (both 1998). In 2000, the Wexner Center for the Arts, Columbus, Ohio organized a major retrospective of the artist’s work, which traveled to the Museum of Contemporary Art, Los Angeles.

In 2009 Aperture published Lyle Rexer’s The Edge of Vision: The Rise of Abstraction in Photography, which featured Welling’s abstract photographs. In 2011 Steidl/Mack will release Light Sources, a publication documenting the artist’s diverse group of portraits, landscapes, and interiors that examine the perceptual properties of light. Welling has also collaborated with poet Susan Howe on a project titled Frolic Architecture, which combines the artist’s photograms with Howe’s poetry, published by the Grenfell Press in April 2010.

Welling was selected as a juror by The Photographers’ Gallery, London for the 2010 Deutsche Börse Photography Prize, a prize awarded annually to a contemporary photographer who has made significant contribution to the medium of photography in Europe.