Animalia. Through an expansive practice that spans drawing, sculpture, video, and artist books, the Seoul-based artist contemplates a world in which perception is radically questioned. 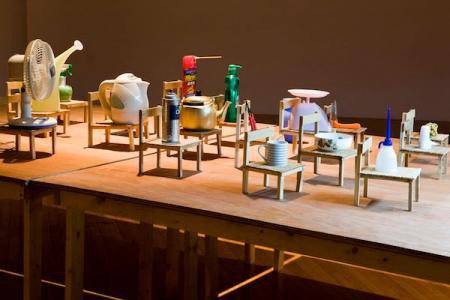 Through an expansive practice that spans drawing, sculpture, video, and artist books, Seoul-based artist Kim Beom contemplates a world in which perception is radically questioned. His visual language is characterized by deadpan humor and absurdist propositions that playfully and subversively invert expectations. By suggesting that what you see may not be what you see, Kim reveals the tension between internal psychology and external reality, and relates observation and knowledge as states of mind.

Organized around the theme and title "Animalia", Kim's exhibition explores the vast sphere of nature and the animal kingdom, often inverting its laws and collapsing the boundaries of living beings and inanimate objects. Refusing to accept the clear distinctions that separate realms of existence, Kim deftly employs animism, illusion and a deep sense of empathy in his works to reflect upon and transgress the social institutions that delineate natural order.

Kim Beom (b. 1963, Seoul) currently lives and works in Seoul, where he received his BFA and MFA from Seoul National University in 1986 and 1988, respectively. In 1991, Kim received a second MFA from the School of Visual Arts, New York, where he continued to live and work throughout the 1990s. He has since had numerous solo exhibitions in such venues as the Artsonje Center, Seoul and, most recently, at the Cleveland Museum of Art. In addition to being featured prominently in recent surveys of contemporary art from Korea at such venues as the Museo Tamayo Arte Contemporáneo in Mexico City, the Los Angeles County Museum of Art, and the Museum of Fine Arts in Houston, his work has been included in such notable international exhibitions as the 2003 Istanbul Biennial, the 2005 Venice Biennale and Media City Seoul 2010.

The exhibition is made possible through a collaboration with the Cleveland Museum of Art.

Major funding provided by the Korea Foundation with generous support from Stacy and John Rubeli.