Dust Jackets for the Niggerati - and Supporting Dissertations, Drawings submitted ruefully by Dr. Kara E. Walker. This body of work grew out of the artist's search for understanding of the way that power asserts itself in interpersonal and geopolitical spheres. 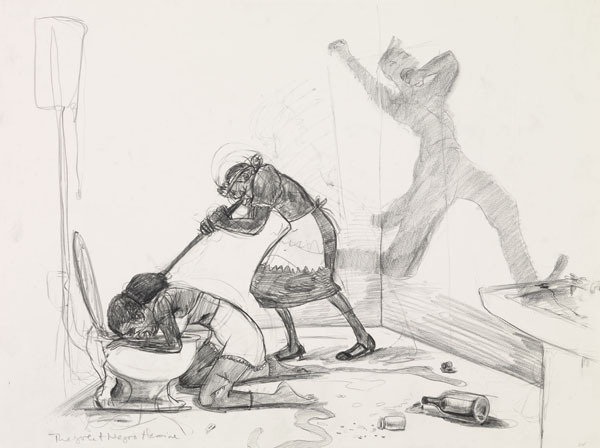 Sikkema Jenkins & Co. and Lehmann Maupin Gallery are pleased to present joint exhibitions of new works by Kara Walker on view at both galleries from April 21 through June 4, 2011.

The exhibition at Sikkema Jenkins & Co., Dust Jackets for the Niggerati- and Supporting Dissertations, Drawings submitted ruefully by Dr. Kara E. Walker, will feature new graphite drawings and hand-printed texts on paper. This body of work grew out of the artist’s search for understanding of the way that power asserts itself in interpersonal and geopolitical spheres. As she embarked on this quest the figural elements began to disappear from her work. Now, they emerge again in what Walker describes as a “giddy embrace” of the figural and the narrative.

The works explore themes of transition and migration that run throughout the African American experience in the 20th century. There is a cycle of destruction and renewal that is embodied in the move from country to city, as well as the destruction of an “old” Black identity and the emergence of a “New Negro” identity. Thinking metaphorically about this move from rural to urban environment, the works can be read almost as a comic book or storyboard. There is a narrative present – both explicit and implied – about the constant fluctuation of identity.

In the concurrent exhibition, Fall Frum Grace, Miss Pipi’s Blue Tale, Lehmann Maupin Gallery at 201 Chrystie Street will present three new video works which draw on Walker’s own experience in the Mississippi Delta, “a region mythologized in song and popular culture but tragically depressing.” She explains, “I drove down to the Delta thinking about the terrors of Jim Crow and slavery, yet the silent indifference of the landscape and the economic stasis, lack of mobility, and the persistence of a racist memory in the area was what stuck.”

The title video, Fall Frum Grace, Miss Pipi’s Blue Tale, is a shadow puppet narrative which follows the travails of the heroine, Miss Pipi, intercut with “abstracts” of a surreal and violent nature. The subtext of the video is the mythology surrounding white Southern womanhood, historically cited time and time again as an entity to be protected from sexuality, in particular from the presumed hyper-sexuality of black men. Although fiction, this was the excuse for the murder of countless black men and boys in Jim Crow America. Miss Pipi’s Blue Tale is meant to be as deeply contradictory a visual tale as the Blues is in music. Delta Blues, often merges broad comedy with despair, sensuality with loss and do-it-yourself urgency with structured improvisation.

The exhibition’s musical theme is revisited in the short video loop, Bad Blues. Featuring the artist and shot while traveling in Mississippi, the video is a comic sketch about black female agency and having “The Blues”. Another video, titled Levee, is a quiet meditation on the landscape set at sunrise in Friars Point, Mississippi. The straight line that bisects the image is the top edge of a section of levee, shot from below, at the edge of the Mississippi River. It is a black space, a barrier and engineering feat that receives little attention until failures occur such as the 1927 levee break at Greenville, Mississippi or more recently those caused by Hurricane Katrina in 2005.

Kara Walker was born in 1969 in Stockton, California and currently lives and works in New York. Walker is known for her candid investigation of race, gender, sexuality, and violence through silhouetted figures, which have appeared in numerous exhibitions worldwide. The artist’s recent solo exhibitions include The Black Road at CAC Malaga, Spain; Kara Walker at the Met: After the Deluge at the Metropolitan Museum of Art, New York; and Kara Walker: My Complement, My Enemy, My Oppressor, My Love, which premiered at the Walker Art Center in Minneapolis and traveled to the Whitney Museum and the Hammer Museum in Los Angeles. Walker is the recipient of numerous grants and fellowships such as the John D. & Catherine T. MacArthur Foundation Achievement Award, the Deutsche Bank Prize, and the Larry Aldrich Award.

For additional information please contact Scott Briscoe at 212.929.2262 or scott@sikkemajenkinsco.com