The Whitney Museum of American Art inaugurates a multi-year exhibition initiative aimed at reassessing the museum's collection and, by extension, the history of 20th and 21st century American art. 'Breaking Ground' features a selection of approximately one hundred objects drawn from the Whitney's founding collection. 'More Than That' presents a series of films by Kevin Jerome Everson. His filmic fables, the focus of this exhibition, articulate the profound within the ordinariness of everyday life. 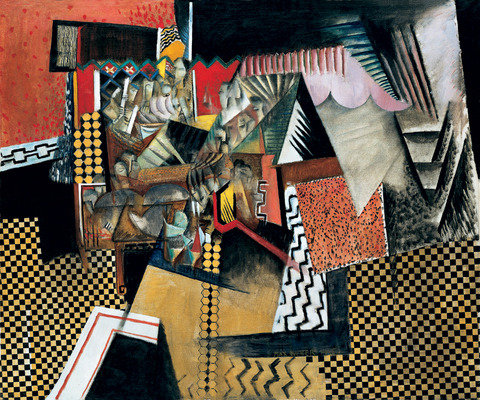 This spring, the Whitney Museum of American Art inaugurates a multi-year exhibition initiative aimed at reassessing the Museum’s collection and, by extension, the history of twentieth- and twenty-first-century American art. As we approach groundbreaking for our downtown building project, the Whitney’s curatorial team has devised a series of collection installations that will serve as a laboratory for possible approaches to displaying the Museum’s holdings in its new building. From late April 2011, through the end of 2013, each of six consecutive exhibitions on the second floor of the Whitney’s Breuer building will present a focused look at roughly one to two decades of American art seen through a novel, sometimes revisionist lens. These exhibitions, unfolding in chronological order as part of a larger “exhibition in time,” collectively offer a panorama of a century of art in the United States.

Rather than proceeding according to the best known “isms” that have come to define American art, this group of exhibitions will expand on the scholarly and popular conception of this nation’s art history by exploring more unsung or overlooked developments or by reconsidering iconic figures and masterworks in a new frame or context. As Chief Curator and Deputy Director Donna De Salvo remarks, “Each exhibition will dig deep into the Museum’s holdings in order to unearth new discoveries and create intellectual frameworks beyond the established canon. Proceeding from the assumption that history is subjective and fluid, we want to consider it as an open, rather than closed inquiry.”
The series begins with Breaking Ground: The Whitney’s Founding Collection, which takes a fresh perspective on the origins of the Museum’s collection and on a rich moment in the history of American art. Breaking Ground revisits the Museum’s early approach to installation and its democratic and inclusive collecting philosophy, which aimed to convey the breadth and diversity of American art, from conservative portraiture to modernist abstraction.

At the turn of the twentieth century, Gertrude Vanderbilt Whitney, an heiress and sculptor born to one of America’s most famous families, began to assemble a rich and diverse collection of modern American art. A great champion of the American artists of her time, she opened, in 1914 and 1918 respectively, the Whitney Studio and the Whitney Studio Club, precursors to the current Museum. In the autumn of 1929, weeks before the stock market crash that ushered in the Great Depression, Mrs. Whitney announced the founding of the Whitney Museum. Soon thereafter, she and Juliana Force, who would serve as the Museum’s first director, began a concerted effort to bolster the collection that Mrs. Whitney had amassed during the previous two decades. Two hundred works were purchased before the Museum opened in November 1931; an equal number followed in the Museum’s first few years. These works, approximately 1,000 in total, comprised the founding collection, which Mrs. Whitney deeded to the Museum in 1935.

In creating a museum, Mrs. Whitney sought to retain the intimacy and informality of the Whitney Studio and Club, as well as its egalitarian spirit. She and Juliana Force painted the galleries in soft pastels and embellished them with plush draperies and streamlined Moderne furniture; hallways featured patriotic stars-and-stripes wallpaper. The labyrinthine layout of the galleries—the result of having joined together four residential brownstones—predisposed visitors to meander, rather than follow a preordained trajectory. Breaking Ground will evoke certain aspects of this design.
The second exhibition in the series, Real/Surreal, opening in the fall of 2011, will also be drawn entirely from the holdings of the Whitney’s permanent collection. It focuses on the tension and overlap between realism and surrealism in American art of the 1930s and '40s and features more than one hundred works in painting, drawing, photography, and printmaking. Support

The Whitney Museum of American Art is the world’s leading museum of twentieth-century and contemporary art of the United States. Focusing particularly on works by living artists, the Whitney is celebrated for presenting important exhibitions and for its renowned collection, which comprises over 18,000 works by more than 2,800 artists. With a history of exhibiting the most promising and influential artists and provoking intense debate, the Whitney Biennial, the Museum's signature exhibition, has become the most important survey of the state of contemporary art in the United States. In addition to its landmark exhibitions, the Museum is known internationally for events and educational programs of exceptional significance and as a center for research, scholarship, and conservation.

Founded by sculptor and arts patron Gertrude Vanderbilt Whitney in 1930, the Whitney was first housed on West 8th Street in Greenwich Village. The Museum relocated in 1954 to West 54th Street and, in 1966, inaugurated its present home, designed by Marcel Breuer, at 945 Madison Avenue on the Upper East Side. While its vibrant program of exhibitions and events continues uptown, the Whitney is moving forward with a new building project, designed by Renzo Piano, in downtown Manhattan. Located at the corner of Gansevoort and Washington Streets in the Meatpacking District, at the southern entrance to the High Line, the new building, which has generated immense momentum and support, will enable the Whitney to vastly increase the size and scope of its exhibition and programming space. Ground will be broken on the new building in May 2011, and it is projected to open to the public in 2015.

More Than That: Films by Kevin Jerome Everson

Kevin Jerome Everson (b. 1965) works in film, painting, sculpture, and photography. His filmic fables, the focus of this exhibition, articulate the profound within the ordinariness of everyday life. Everson, who was born in the working-class community of Mansfield, Ohio, depicts details in the lives of people living and working in similar American communities: a mechanic repairing an old car in a backyard, a black beauty queen in a segregated pageant, men boxing, snowplow operators in winter, young men walking into a courtroom, the aftermath of a murder.

Some of Everson’s films are constructed from appropriated news and film footage, uncovering forgotten details of African-American life in the 1960s and 70s. In other films, the artist explores the waxing and waning of a community’s sense of itself and the migration of black people from the South to the North in order to find work. Everson, whose work was included in the 2008 Whitney Biennial, approaches race, sexuality, and economic circumstances with a poetic yet unflinching eye. Adopting the stance of an observer, his interest in labor has both a political and a formal aspect, exploring the relationship between the human body and the materiality of the labor it performs as both an expression of class and identity, and as a performative gesture. More Than That: Films by Kevin Jerome Everson is curated by Anne & Joel Ehrenkranz Curator Chrissie Iles.

The Whitney Museum
945 Madison Avenue at 75th Street, New York City
Museum hours: Wednesday, Thursday, Saturday, and Sunday from 11 am to 6 pm
Friday from 1 pm to 9 pm, closed Monday and Tuesday
General admission: $18. Full-time students and visitors ages 19–25 and 62 & over: $12
Visitors 18 & under and Whitney members: FREE
Admission to the Kaufman Astoria Studios Film & Video Gallery only: $6.
Admission is pay-what-you-wish on Fridays, 6–9 pm