A, H, O, I, ! ... presents Putrih's latest sculptures and works on paper. The work of artist is based on several interconnecting ideas and practices; in particular, he is interested in how architecture, design and science affect systemic societal structures. As in the case of the four sculptures A, H, O, and I, which provide the starting point of this exhibition, the materials Putrih uses often consist of simple, elemental structures. 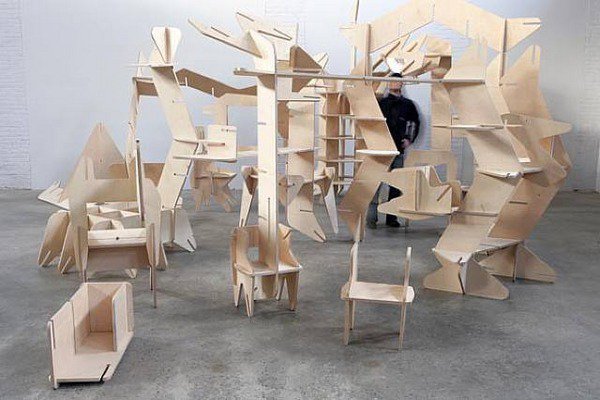 Galerija Gregor Podnar is pleased to announce the opening of the exhibition A, H, O, I, ! ..., which presents Tobias Putrih’s latest sculptures and works on paper.

The work of Tobias Putrih is based on several interconnecting ideas and practices; in particular, he is interested in how architecture, design and science affect systemic societal structures. As in the case of the four sculptures A, H, O, and I, which provide the starting point of this exhibition, the materials Putrih uses often consist of simple, elemental structures. These modular objects, able to be altered, are made of long styrofoam sticks supported by an inner wooden grid structure serving as a kind of connector system. The four letters on display humorously refer to the signal word "Ahoy," a familiar word from the sailor’s vocabulary and also used daily as a form of salutation or greeting in the Czech Republic and Slovakia.

These modular objects were created as a tribute to the „Reliefometar“ sculptures by Croatian architect and artist Vjenceslav Richter (1917-2002), who, as co-founding member of the Zagreb group Exat 51, promoted a neo-avantgarde utopia fusing art, architecture and design with everyday life.

In another references also dating back to the 50s and 60s, Putrih’s new sculptures are related to the ideas of the Metabolists, a group of Japanese architects and city planners (Kiyonori Kikutake, Kisho Kurokawa, et al) founded in 1959. Their vision for the cities of the future to be inhabited by mass society were characterized by flexible, expandable large-scale structures evoking the processes of organic growth. In their view,The Metabolists held the traditional laws of fixed form and function were to be obsolete. They considered the construction of buildings for the community to be understood as a metabolic process, just as communities themselves are in a constant state of biological renewal and thus fall outside all fixed and schematic design principles. Following these modernist ideas on the continuous transformation of architectural and social spaces, the styrofoam pieces are a playful attempt to generate an interconnected system of signs and meaning with the use of modular structures.

Putrih’s new collage newspaper works entitled Times (which also contain the date of each issue), to be shown for the first time in the Berlin exhibition, follow the reverse principle. This series consists of old morning newspapers that Tobias Putrih read every day and cut up; they are exhibited as glue-soaked, hardened plates of chopped newspapers. The papers – or the letters and images of the paper medium – are consequently transformed into an unstructured form freed of all “meaning”.

The large-format pencil drawings, O to H, End of A, Beginning of O, present a synthesis between the styrofoam and paper works. These works feature stacked, growing, honeycombed structures of letters positioned between modular architectonic constructions and ruin-like aggregations of shapes that appear to be collapsing in on themselves.

Based in Cambridge, Massachusetts (USA), Tobias Putrih (born in 1972 in Kranj, Slovenia) has exhibited his work to great acclaim in both Europe and America. In 2002, he took part in Manifesta 4 in Frankfurt am Main; in 2005, he appeared in the show Greater New York at PS1 in New York; and in 2006, his project MUDAM’s Studio (a collaboration with Sancho Silva) was presented at the new Musée d’Art Moderne Grand-Duc Jean (MUDAM) in Luxembourg. In 2007, he represented Slovenia at the 52nd Venice Biennial, and an overview of his works was also shown that same year in the Quasi-Random exhibition at the Neuberger Museum of Art in Purchase, New York. In 2010 he took part in the “Promises of the Past” group exhibition at the Centre George Pompidou in Paris and participated in the 29th Biennial of São Paulo. In May 2011 he will be showing his next solo project at Max Protetch Gallery in New York.