All Around. Wim Botha works in the medium of sculpture, carved from unusual materials such as books and polystyrene, but also from wood and wax. In his latest series of works, Botha presents a human self that extends into dimensions it can hardly bear, which inevitably distort the self in the attempt to fulfill cultural, familial and gender-specific demands as well as social, political and historical roles. 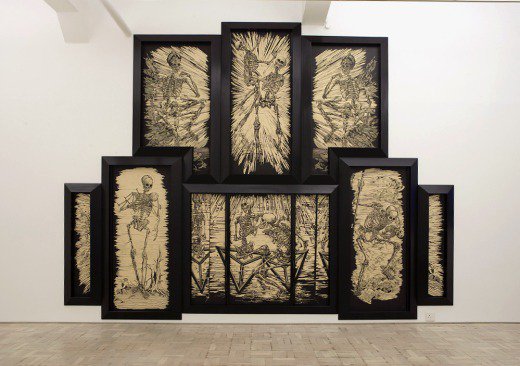 Galerie Jette Rudolph (Berlin) is pleased to present its second solo show featuring South African artist Wim Botha. The gallery “Laden für Nichts” (Leipzig) invited us to be guests with artist Wim Botha at the Spring Gallery Tour hosted by the Spinnerei in Leipzig on the last weekend in April.

Wim Botha (born in 1974 in Pretoria, lives and works in Cape Town) works in the medium of sculpture, carved from unusual materials such as books and polystyrene, but also from wood and wax. These are accompanied by small- and large-scale ink or charcoal drawings and etchings and linoprints. Botha installs the varied works within an architectural framework that is presently less hermetic in form. The figurative motifs in the frame are transferred from their former narrative or associative discourse to a context that highlights their expressive force in a compelling manner and that still revolves around the themes of identity, history, culture, nature and death with many art historical, heraldic and (natural) science references; only now there is a stronger focus on just a few individual characters.

“Actually, the grotesque … discloses the potentiality of an entirely different world, of another order, another way of life. It leads men out of the confines of the apparent (false) unity, of the indisputable and stable.” (Mikhail Bakhtin)

Distortions and exaggerated mannerist gestures inform Wim Botha’s work as much as the specific references that he makes to art-historical motifs and cultural topoi. In his installations, the artist often combines an established formal repertoire with surprisingly sardonic elements, creating strange constellations that articulate a paradoxical interplay between empathy and outrage. If grotesque originally referred to the expression of unbridled fantasy, which moves beyond church-influenced art and allows for the freedom to create hybrid creatures that are a combination of human being, animal and plantin past centuries the term take on new meanings and refers to both comic as well as to bizarre and ugly transgressions and breaks with established orders. For Botha, the human body, in particular, becomes a projection surface and a space for identification which, through distortion and expressive gestures, are transformed into the grotesque. Botha unconditionally focuses on the fate of individual anonymous characters and through studies in distorted morphology, he forces them to the most extreme limits of what their bodies and psyches can bear.

A new figure ensemble has been created for “Solipsis” (the philosophy that only the self exists) which is at the center of Botha’s solo show, carved from white polystyrene material whose sharp edges and surfaces recall a drawing’s shading. Integrated into the group is a cluster of fluorescent tubes, whose bright cold light seems to dissolve the human motifs and animal-like creatures, transforming them into an abstract play between multi-faceted forms. Installed across from it is the floating bust of a young girl whose gentle countenance was carved from art catalogs that are unevenly stacked on top of one another.

Botha’s busts or allegorical portraits in the Ecstasy Series are equally expressive; they are carved from African Bibles where the light paper material playfully gives his heads an expressive and alienating morphology. The composite is framed by an asymmetrical crystalline play of forms made of black wood, which can be interpreted as heroic wings or loosely fluttering fabric. The declamatory and sometimes seemingly distorted gestures of Botha’s busts refuse to adhere to the aims of traditional portraiture whose objective is to disclose a specific person’s essence. Instead, the busts explore human figures and countenances and create emotional expressions that are sculpted to varying degrees, thereby highlighting the element of process in the works. The gaze searching for the character behind the facial expression is not lastly evoked by the explicitly non-finito nature of the works.

A series of charcoal drawings in the exhibition space’s entrance introduces viewers to the background behind the artist’s motifs; his “moving mix” approach is clearly visible here. Abstract structural elements combine with portrayals of human beings to turn into morphing hybrid creatures that – through the particular logic of the signs – mix the blatantly obvious with the implied. Botha’s formal geometric repertoire displaces any instinctive identification with the figures presented in the sketches, whereas the indifferent way the figures are integrated into a spatial system demands that the viewer intensely examine the still gestures.

In his latest series of works, Botha presents a human self that extends into dimensions it can hardly bear, which inevitably distort the self in the attempt to fulfill cultural, familial and gender-specific demands as well as social, political and historical roles. Until what finally happens is that – in the process – it runs the risk ruining itself as an autonomous author. His new composite work perhaps recalls Houellebecq’s search for a person’s inner truth and spirit: “I really know that the human being is the subject of the novel, the great occidental novel, and that the human being is also one of the major themes in painting, but I can’t dismiss the thought that people really aren’t all that different from one another, as they generally seem to think” (from “The Map and the Territory”).

Galerie Jette Rudolph will be a guest gallery during the Spring Gallery Tour at the Spinnerei in Leipzig from April 30 – May 1, 2011