End to The Grand Gesture. The exhibition goes in the direction of an 'ensemble' or set of works. This stands in connection to the title of the show, but it is also a general feeling of artist. There were a lot of intuitive gestures that artist included in the work. The process goes beyond positioning physical objects in the space. In this exhibition, the works are also the walls and the white ceiling. 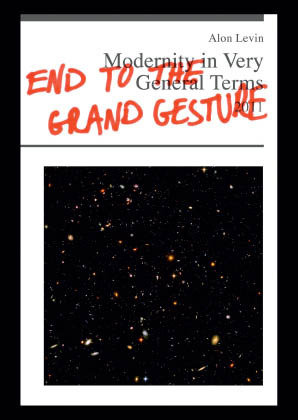 Sebastian Klemm: Starting with the idea of 'breaking a habit' - you usually produce large-scale installations. But as we sit here in your studio - surrounded by a number of soon to be finished pieces - one could get the impression that your upcoming exhibition will go more in the direction of an 'ensemble' or set of works.

Alon Levin: Of course, this stands in connection to the title of the show, End to The Grand Gesture, but it is also a general feeling of myself, something I would call 'the success of failure' - try something that is bound to fail and eventually through that process you learn what is working.

Silvia Kaske: Applying the color white to formerly colorful elements is literally a process of 'whitening out' some of the work you have done before. But there could also be 'blackening out' - so why would you use white, seeing that both black and white are non-colors?

Alon Levin: Both are colors that symbolize something. I see blackening as something very brutal.

Alon Levin: And a very aggressive one! But white represents defeat, like the white flag. The color both erases the old but also creates a new work, like Untitled, a Universe Under Control, which was part of my first show at KLEMM'S, and will now be in the exact same place again, but this time it is 'chopped'. The work is physically deconstructed into many new parts. So the white can be read either as a new start, a blank page, or as a cover-up.

Sebastian Klemm: That brings me back to the title of the exhibition, which in itself sounds like a grand gesture.

Alon Levin: Indeed it is quite a statement and at first I wasn't even aware of it. But when I was working on the book accompanying the exhibition, I realized that it needed an introductory note to direct the reader. I thought of writing that the book was a grand narrative of the failure of the Utopian dream - but this phrase demanded a lot. So I changed it and now it says: Modernity in Very General Terms is meant as notes towards a 'grand narrative' of modernity's utopian failure.

Silvia Kaske: So would you say then that the titles of the book and the exhibition are like mutual comments that feed into each other?

Alon Levin: They supported each other during the working process and I switched the titles around all the time. But I do feel that End to The Grand Gesture is not as big a statement as Modernity in Very General Terms. I am talking about modernity as an early philosophical idea, one that starts with the 15th century, not just modernism of the 20th century.

Sebastian Klemm: There is a trend of artists at the moment working with aspects of modernism. Where do you stand?

Alon Levin: I care about what is around me but when I look at these things, I know they were not invented yesterday, and so they keep leading me further back. It is always a process of editing this data, but only then can you look at the bigger picture, which is neither modern nor postmodern. It is a more comprehensive approach that does not only reflect in a certain reiteration and alteration of well-known forms. I am searching for all those pillars and thoughts that dictate the way we think in Western culture.

Sebastian Klemm: Coming back to the look of the work, we have the impression that the new show will have a different and very special atmosphere: in addition to the fact that everything is completely white, there will be kind of a 'filtered daylight' in the gallery. So that you will have a White Cube with a lot of white works, only hints of predecessive color.

Alon Levin: There were a lot of intuitive gestures that I included in the work. The process goes beyond positioning physical objects in the space. In this exhibition, the works are also the walls and the white ceiling. Blocking the window is part of it - everything becomes hidden, the space becomes a white cube but also a place where something has happened or will happen, like a stage.

Sebastian Klemm: Would you say that you work more with your intuition than before? Looking at your work, it seems there is a masterplan with still enough space for things to happen. Now with these objects that you could actually pick up and carry in front of you like signs, it feels more playful than the idea of a 'bigger picture' that has to be there in the end, like the ferris wheel that you did before.

Alon Levin: With the smaller structures, I could start without a grand scheme, without a defined thing, but more with an intuitive idea, so that the playfulness happened while figuring out what it would become. In this way the structure and the playfulness are similar to what I've done before, but what is different is the process that led me to it.

Sebastian Klemm: What is interesting as well is that there is going to be an actual book to look at as part of the work, a Wikipedia lexicon. In the work itself, you could discover identical layers of sheets or books in shelves. Is this connection to science or literature something that you had in mind?

Alon Levin: It certainly is a form of piling up - everything gets organized in this physical archive. In that sense, every archive is like a measurement of time and thought. So all those structures, all these panels piling up, the lines on the walls, they can all be seen as arrangements of quantitative measurements and of time I like the idea that modernity starts with the philosophical thought that from now on, we control things and the way they will be rather than to tell how things have been in the past. The white paint still exposes the past, it is not trying to hide anything. As utopian societies are in search for something, the pieces in the show can be used as Revolutionary Tools . These are structures that can be held up as if to serve a certain purpose, like an architectural plan or a model for something.

Silvia Kaske: Perpetuation or 'nothing gets lost' seems to play a crucial role in your work in general. For example, when you have chopped up the big piece, it is still the same amount of material, now reconfigured into a totally new form.

Alon Levin: The idea came about for a very functional reason. It was a gigantic object that was a huge burden to me, while now it is very manageable: you can pile the pieces up on top of each other - it is very efficient! I'd say it is scientific in the sense that it wastes no energy as you said, like the perpetual motion machine that man always sought after and will continue to seek, although everything tells us that it is impossible and we know it. But the dream is always there.