Galerie Barbara Weiss is pleased to announce the opening of its new gallery space in Berlin's Kreuzberg district on the occasion of the 2011 Gallery Weekend with a solo exhibition of internationally renowned Ukrainian photographer and Hasselblad Award winner Boris Mikhailov. In his current exhibition, Mikhailov presents two series, Black Archive 1968-1979 and Tea Coffee Cappuccino 2000-2010, created more than two decades apart. 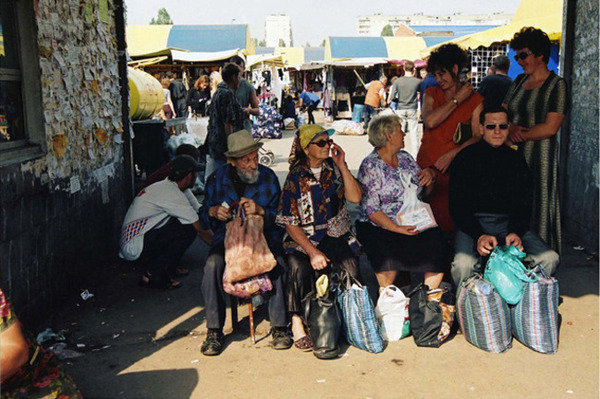 Galerie Barbara Weiss is pleased to announce the opening of its new gallery space in Berlin’s Kreuzberg district on the occasion of the 2011 Gallery Weekend with a solo exhibition of internationally renowned Ukrainian photographer and Hasselblad Award winner Boris Mikhailov (born in Charkow in 1938).

As the tides of conceptualism flowed through literature and art in Moscow during the 1970s, Boris Mikhailov, in his Ukrainian hometown of Charkow, began developing and implementing conceptual strategies in his photography as well. Extending to cover more than forty years, Mikhailov’s body of works is extraordinarily multifaceted. The artist stages himself and friends revealing and challenging things to varying degrees within photographs that often carry an air of the grotesque and the sarcastic; he colors and distorts black-and-white photographs from anonymous photo albums; he observes the normal and everyday as well as open spaces within the private sphere as set in the former Soviet Union and today; he examines the societal breakdown seen on the streets of Kiev and Charkow since the “fall of Soviet rule”; and he takes photographic prints and tints them or adds handwritten notes to them. Mikhailov’s work is always done within the framework of a series. As he states, “For that, I need the pictures, sequences and series, which allow me to cast doubt on the single possible way of perceiving something, to preserve the space and to convey historicity by reproducing the sense of the times.”

The original historical photographic prints of the Black Archive series, all small-format works, depict Charkow – one of the centers of early Soviet Constructivism – and its inhabitants. The motives, which convey a poetic perspective on the lives of people living within Communism, often feature a Constructivist composition, one always reflected within the objects he captures – whether those be the grating of a house façade, a network of electric cables, a chimney soaring high into the heavens or a simple balance beam. While the pictorial language of the series resembles the traditional lyricism of the 1960s in the way it depicts urban landscapes, some of his pictures still retain a sense of sarcasm lurking just beneath the surface.

Mikhailov’s Tea Coffee Cappuccino series ties into his three main series from the nineties, Am Boden (1991), Dämmerung (1993) and Case History (1997), capturing the changes to time and space enacted for the general populace and within his milieu in the post-Soviet life of Charkow. The scenes portrayed, partly discovered and partly staged by the artist, tell of the “new time” around the turn of the century, years marked by “doing business.” The people in these works are repeatedly seen with totes and grocery bags. Advertising banners and cheap goods create a new, colorful “plastic reality.” The present series unveils not only Mikhailov’s sharp eye for historical events but also his characteristic sense of humor, such as in the halos he lends to ice swimmers.