LAO MA TI HUA (Disturbing the Peace), 2009. An AiWeiwei's film, within 'Aesthetics as Revolt' a series of conversations, conducted by Jan Tabor. 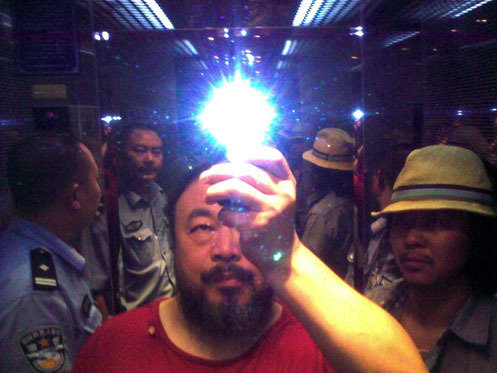 Ai Weiwei's film LAO MA TI HUA is a documentary of an incident during Tan Zuoren's trial on August 12, 2009. Tan Zuoren was charged with 'inciting subversion of state power.' Chengdu police detained witnesses during the trial of the Civil Rights advocate, which is an obstruction of justice and violence. Tan Zuoren was charged because of his research into the corruption which resulted in poor construction of school buildings and the following students' deaths in the Sichuan earthquake 2008. Tan Zuoren was sentenced to five years in prison. Ai Weiwei intended to witness at the trial, when on August 12 the police broke into Ai's hotel room. During this raid the artist was hit heavily on the head by police officers and suffered a traumatic brain injury, which stopped him from appearing in court. The subject 'Aesthetics as Revolt' is always relevant, but due to the arrestment of Ai Weiwei suddenly it became imperativ and real. In autumn 2010 we exhibited Hurt Feelings - Ai's political photographs and videos. Now his studio in Shanghai is demolished, the atelier in Peking raided and barred, all computers confiscated, his family under house arrest, Ai Weiwei detained and accused of 'economic crimes'. 'Aesthetics as Revolt' is the topic of a series of conversations, conducted by Jan Tabor: Saturday, April 30, 2011, 1 p.m. Jan Tabor in conversation with the philosopher Isolde Charim.