This group exhibition unites regional, Swiss and international positions against the background of a common theme. All the positions negotiate matters of construction, destruction and reconstruction, as they might emerge from a disaster such as that of the Glarus fire of 1861. The exhibition shows both poetic and also critical statements about the moment of the zero point of civilisation, the social and cultural reconstruction and its fictitious-utopian potentials. 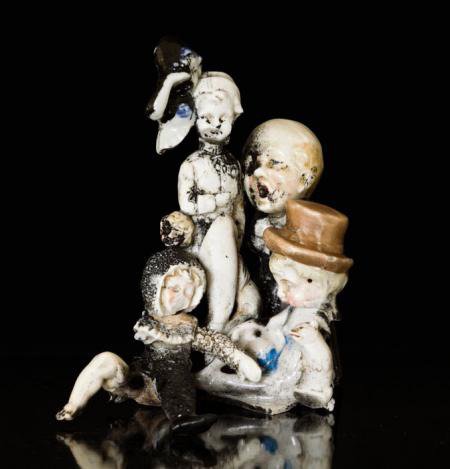 Kunstschaffen: Extraordinary!
In the context of "Glarus brennt" 150 Years after the Glarus fire.

This group exhibition unites regional, Swiss and international positions against the background of a common theme. All the positions negotiate matters of construction, destruction and reconstruction, as they might emerge from a disaster such as that of the Glarus fire of 1861. The exhibition shows both poetic and also critical statements about the moment of the zero point of civilisation, the social and cultural reconstruction and its fictitious-utopian potentials.

The theme of the exhibition refers to the memorial activities from May to September for the 150th anniversary of the Glarus fire of 1861. This conflagration destroyed almost the entire city. For its reconstruction the urban planning concept employed was extremely progressive for its time. Destruction and reconstruction are themes with a long tradition in the history of both humanity and art. Devastations by war, social and political unrest, struggles for power and modernisation as well as natural disasters repeatedly provide breeding grounds for a wide variety of different utopian and dystopian visions, and these also find a place in the arts. The current environmental catastrophe in Japan gives some of the works in the exhibition an especially urgent currency, which in turn gives the overriding theme of the exhibition a global dimension.

The selection of regional artists is based on a project competition under a common theme as assessed by an expert jury made up of Katharina Ammann (conservator at the Bündner Kunstmuseum), Nadja Baldini (art historian and freelance curator) and Boris Magrini (art historian and freelance curator), who selected six projects by artists of the region. The exhibition shows works by Sarah Burger, Marina Hauser, Susanne Hauser, Nicole Hoesli, Siro A. Micheroli and Sweeterland. Other Swiss positions are represented by Christoph Draeger, Loredana Sperini and Wiedemann/Mettler while international positions have also been invited from Janet Cardiff & George Bures Miller, Sofia Hultén and Cyprien Gaillard, all of whom are concerned with the same complex of themes. After the initial "Kunstschaffen: Extraordinary!" exhibition of this kind in 2007, the exhibition of regional artists is taking place again this year, under new conditions.

Sarah Burger (b1982 in Glarus, lives in Zurich) has taken an abandoned wooden shed, falling in on itself, which she observed on the Linth Plain from a train window for some time before it was finally destroyed, in order to make a "Moon Room" (Mondzimmer, 2011). She transfers the found, drawn material to the exhibition gallery and reconstructs a room making it possible to look out on a projected moon which slowly moves. This mysterious place, a zone between space and time, reality and fiction, provides a projection screen, a mental space for reflection on past and future on the rise of culture and its dissolution over time.

Marina Hauser (b1969, lives in Glarus) designs a series of postcards, where she gives the city of Glarus a new fictitious form with digital processing. Inspired by an interest in the possibilities of an alternative urban design, as they existed at the time after the Glarus fire and the utopian ideas of an ideal, humane living space, she designs the postcards in a touristic style and plays with posting them all over the world, with a sly glance as well at tourists' expectations of her home town.

Susanne Hauser (b1946, lives in Weesen) is showing a series of abstract drawings especially developed for the exhibition entitled "Constructive Destruction" (2011). She takes the exhibition's theme as the occasion to think about end-of-time visions and utopian new beginnings. An architectural language reminiscent, perhaps, of Oscar Niemeyer's architecture or aircraft design, and also fragments of form of artificial-garish colourfulness, of the kind familiar from the plastics industry, are condensed by the artist into apocalyptic mental landscapes. The feeling of an end-of-time atmosphere is intensified by the broad, dark overpainting techniques and the multifaceted quality of the series.

Nicole Hoesli (b1980 in Netstal, lives in Zurich) is showing a work in two parts, a video and an installation-like film set, entitled "Johnny Guitar" (2010). The video shows a simulated scene from Nicolas Ray's film classic "Johnny Guitar", where the artist plays the role of the protagonist and employs a collage technique to bring in cuts from the original film of 1954. The associated, seemingly makeshift set becomes both an abstract sculpture as well as a reference to the construction of film reality itself. Hoesli's work shows no specific reference to the theme of reconstruction, but is an attempt at the real construction of a fictitious film scene and is thus a puzzle involving the construction of reality itself.

Siro A. Micheroli (b1973, lives in Ennenda and Zurich) is showing a multi-part series of photos of two towns in the neighbourhood of Tschernobyl entitled "From Prypjat to Slawutych" (2007-11) - Prypjat, located in the contaminated forbidden zone and Slawutych, a newly built "substitute" town for people two years after the evacuation of Prypjat. The documentation shows Prypjat as a decayed town left to the effects of nature for a quarter of a century, where the house of culture, cinema, sport complex and amusement park are becoming overgrown, and Slawutych as an analogously built, now inhabited workers' town, where, however, due to hasty construction, traces of decay can already be found after just a few years. Micheroli is also interested in the inhabitants of this city and shows individual portraits of the relocated people, who, in many cases, are now working on rebuilding reactors.

Sweeterland is a collective made up of Elena Könz (b1987 in Chur), Judith Weidmann (b1977 in Dielsdorf), Yvonne Good (b1984 in Sursee), Dominik His (b1965 in Basel, lives in Zurich) and Matthias Käser (b1978 in Schlieren, lives in Glarus). This group of artists is showing an ironic statement in the form of a installation which refers specifically to the cause of the Glarus fire of 1861. The south wind, which is well known in Canton Glarus, is described as bearing the main responsibility for the conflagration. Against this background, Sweeterland is showing an installation with fifty electronically controlled hairdryers (a reference to the German word "Föhn", which describes both the wind and the dryers), which irritate the viewers with sudden streams of hot air at various points in time.

Janet Cardiff & George Bures Miller (b1957/1960, live in Berlin and Canada) are represented in the exhibition by their video work "House Burning" (2001). The Canadian duo had a farmhouse burn down in Ontario (Canada) under the control of the local fire brigade and recorded the blaze with video and a three-dimensional sound recording. A hyper-real fire spectacle can be seen and heard, with reference on the one hand to the fascination and beauty of a fiery inferno and, on the other, to the irreversible destruction of the house as a core item of human culture.

Christoph Draeger (b1965 in Zurich, lives in New York) is showing a selection from his wide-ranging series of photographs entitled "Voyages Apocalyptiques" (1994-2011), which has been growing since its inception in 1994. In his work, Draeger has been preoccupied for almost twenty years with the flood of media images and the omnipresent reports from places of horror. In this work he pursued the traces of the tragedies worked up for media reports and visits the locations of terrorist attacks, catastrophic natural disasters, accidents and explosions when they have been reconstructed and portrays them usually from a certain distance in the total filmic image. From a certain distance in time, the former scenes of disaster present themselves mostly as idyllic places, picture postcards of an intact world, where the myth of the former disaster has been inscribed but has partly faded again. At times it is not immediately clear whether these are documentary "crime-scene" photographs or stage film pictures. The boundaries between fiction and reality grow increasingly vague.

Cyprien Gaillard (b1980 in Paris, lives in Berlin) is concerned in his work about contemporary processes of decay, cultural construction and decline, in particular with the idea of contemporary architecture as modern ruins. In his works it is repeatedly a matter of today's perceptions as the past of the future and of casting doubt on the modern myth of progress. The 16mm film "Cities of Gold and Mirrors" (2009) was shot on the Yucatan Peninsula in Mexico. It is made up of five loosely related sequences, circling in and around the holiday paradise of Cancún, founded in 1970, which has now become a city of a million and a place for cheap tourism. Formal analogies of Aztec ruins and postmodern hotel complexes follow pictures of golf courses and the drinking rituals of young "springbreakers", American men who flee to Mexico from the ban on alcohol in their own country. The background music is "Cities of Gold and Mirrors" with the soundtrack of a Japanese-French cartoon series of the eighties, which tells the discovery of America in a mysterious way gives the film an uncanny atmosphere.

Sofia Hultén (b1972 in Sweden, lives in Berlin) is concerned in her works with the processes of dissolution and the potential re-arrangement of found objects and structures, while she modifies them with seemingly absurd interventions and documents these processes in part by video. For the on-floor work "Artificial Conglomerate" (2011) the artist collected large fragments of stone and architectural features from building sites, which she first moulded and then pulverised and then reconstructed from these materials in their original form. This undertaking, which can be repeated endlessly, is an artistic intervention in a cyclic-progressive concept of time involving the origination, change and decay of matter. In another recently made video work entitled "Immovable Objects/Unstoppable Force" (2011) Hultén tries to move a steam roller entirely with the power of thought. In the end, here the human will to reshape matter and the boundaries of rationality are up for discussion.

Loredana Sperini (b1970 in Wattwil, lives in Zurich) is showing a new series of small sculptures made from found fragments of porcelain from the piles of rubble outside Berlin. People still search for valuable objects in the mountains of rubbish heaped up after the Second World War and taken from the rubble resulting from the bombardments. Sperini bought the fragments of bric-a-brac in Berlin and assembled them into new figures, which pay witness to a past time and which are condensed into little scenes to make existential messages for a fragile present and an uncertain future.

Wiedemann/Mettler (b1966/1965 in Chur, live in Zurich) are presenting a new series of photographic works entitled "Tokyo 2011", and made shortly before the earthquake in Japan in early 2011. They are shots of interior rooms and exterior spaces of public and semi-public sites that are empty of people. These model-like images suggest a strong interest in the perception of natural-organic and artificial-constructed spaces and surface textures. Japan is seen as a totally aestheticized, controlled and high-tech culture. Against the background of daily headlines about natural and reactor disasters this image has now changed and the viewer suddenly sees the pictures of the city with a slightly unfocused gaze, in which the latent catastrophe is felt as well.