Forever Rules (Part I) is the first instalment of two solo exhibitions featuring new works by the artist. The main focus is an oak and birch floor-based sculpture, a structure entirely hand built by the artist formed in part by an open sided, oak dodecahedron, its pentagonal facets creating a complex, net-like form. 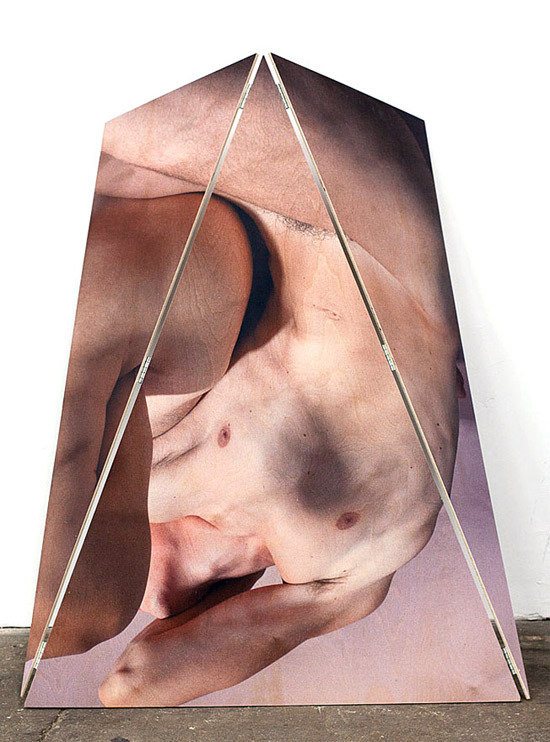 Stone’s latest exhibition for Union Gallery comprises of sculpture and photo-collage on wood. The main focus of the exhibition is an oak and birch floor-based sculpture, a structure entirely hand built by the artist, titled “Forever Rules”.

The sculpture is formed in part by an open sided, oak dodecahedron, its pentagonal facets creating a complex, net-like form. In Plato’s divine geometry, the dodecahedron is described as a perfect solid. Historically it has been attached to the concept of a fifth element, namely Ether (Aether) or Universe. It has represented the perfect mediation of the infinite and the finite, the sphere and the cube.

Simultaneously honouring and parodying Plato’s notion of chartable perfection and absoluteness, the second sculptural element of Stone’s work, pits the poetic complexity of the human body in action against the rigid logic and order of it’s geometric counterpart. A large photographic nude, cut into hundreds of wooden squares and attached to fabric, passes through the structure, draping down onto the floor. The gravity of the body is exposed, if only as a vehicle to escape its singular and lonely physicality.

The sculpture is accompanied by framed photographic collages, printed directly onto birch plywood. These digitally collaged configurations of torso and limb, show bodies intertwined and connected. Unmistakable as Stone’s work, the gestures and classical poses of his languorous figures are intersected by areas of new colour, cut, if only to reconnect, along unnatural, directional and geometric bias.

The recurring motifs of classicism in Stone's work are part of an inherited interconnected consciousness. Positioned neither as classicist nor futurist, he maintains a commitment to history, learning, whilst attempting to shape and commandeer an optimist's future. Stone proposes a new idealism for the twenty first century, that relies on the co-existence of un-compromised visions and the implication of multidimensional ideologies. With a history of building art as a collaborative effort, an open conversation and a spiritual belief, his social-sculptures function as poetic diagrams of a working practice. The works crystallise, without ever simplifying, the ordered chaos of human motion.

Matthew Stone is an artist and shaman. These two interconnected roles are defined by his activities as photographer, sculptor, performer, curator, writer, musician Optimist, and cultural provocateur. Stone’s work and thinking goes far beyond the remit of his art, and his power of existence is recreating the role of the artist in the 21st century. Recognising this, The Sunday Times recently placed him at number one in the arts section of their “Power players under 30” list. He has exhibited at Tate Britain, The Baltic. The ICA & The Royal Academy. His regularly lectures on his personal philosophy of 'Optimism as Cultural Rebellion", which has been defined as an intellectual antidote to the nihilistic paralysis he sees as emerging from Post-Modernism.