A large-scale, city-wide exhibition that will be held in Ghent from 12 May to 16 September 2012. Thirty international artists are being invited to work at indoor and outdoor locations in the various neighbourhoods. They will make use of the local context and the abundant diversity of the urban realm: history, architecture, sociography, culture, population, infrastructure and so on. Until 27th May "Ai Nati Oggi" by Alberto Garutti, and at Gent-Sint-Pieters Station a photomontage by Beat Streuli. 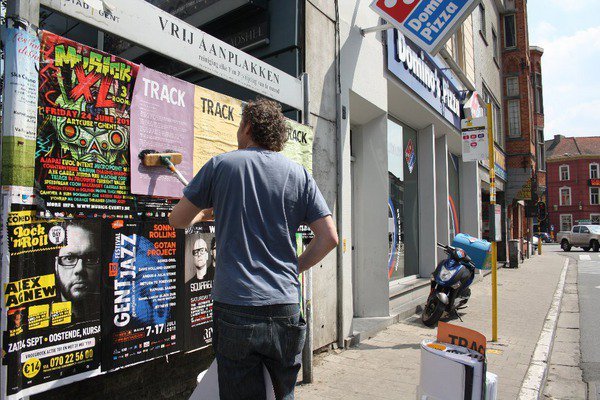 Exactly one year before it opens, the curators Philippe Van Cauteren, artistic director of S.M.A.K. Ghent, and Mirjam Varadinis, curator of Kunsthaus Zürich, are launching the first TRACK Manifesto.

TRACK is a large-scale, city-wide exhibition that will be held in Ghent from 12 May to 16 September 2012. It builds on an existing tradition and joins previous controversial art projects outside the museum such as Chambres d’Amis (1986) and Over the Edges (2000). But TRACK is not a repetition of these earlier events; it profits from the added value accumulated by its predecessors, probes the boundaries of the public and the private and takes account of the increased significance of the domain in recent years.

In the city centre and its immediate surroundings, TRACK will mark out six areas, each with its own distinct character: the area around the Citadel Park, home to the cultural bastions of the S.M.A.K., the Museum of Fine Art and the HISK; the area around the university library ‘Book Tower’ and the Vooruit arts centre, with its high concentration of educational institutions and student amenities; the historical heart of the city where trade has flourished for centuries; the Macharius/Heirnis neighbourhood, where the River Leie joins the Scheldt and which was the cradle of the city; the surroundings of Fratersplein, which combines a large number of care institutions; and the area between the Gasmeter site and the Rabot high-rise blocks, an old industrial district that is being converted into a new residential area. The two stations – Gent-Sint-Pieters and Gent-Dampoort – act as anchor-points for the whole project.

Thirty international artists are being invited to work at indoor and outdoor locations in the various neighbourhoods. They will make use of the local context and the abundant diversity of the urban realm: history, architecture, sociography, culture, population, infrastructure and so on. At the same time they will raise vital questions about our globalised world. So as part of the circuit the visitor will not only come across stories about Ghent, but will also be offered views on ageing, migration, religion, etc.

The first TRACK Manifesto is available in ten languages. You will find the various language versions at www.track.be.

As an intermediary between art and the public, S.M.A.K. is particularly attentive to the interaction between contemporary art, areas of social, political and cultural tension, and the public space. The presentation of two new works in Ghent’s city centre fits well into this framework. The works of Alberto Garutti and Beat Streuli embody S.M.A.K.’s philosophy towards contemporary art in public space and emphasize the importance of qualitative permanent artistic interventions in the city.

On 28 March 2011 Ghent city council purchased the work of art “Ai Nati Oggi” (‘to those born today’) by Alberto Garutti. This work was first shown on the Vrijdagmarkt during S.M.A.K.’s open-air ‘Over the Edges’ exhibition and will now be connected permanently to the street-lamps on Sint-Veerleplein.

The concept is simple: the street-lighting on Sint-Veerleplein lights up every time a new child is born in one of Ghent’s hospitals. A button has been installed in all the delivery rooms, linked to the recognisable spherical street lamps. By this simple mechanism, Garutti shows literally the growth and sensitivity of the city of Ghent and its inhabitants. In this urban society, birth, the city and life are intimately connected, and this is made tangible in the recognisable and accessible language of this work of art. Garutti thus makes the birth of every new ‘Gentenaar’ more than just a statistic. In this work, each and every birth assumes great sentimental value. Through the action of the obstetrician when he presses the button in the hospital and the reaction of the passers-by and pavement café visitors on the square, the work involves the inhabitants of this city in a very direct, active and visible way.

“Ai Nati Oggi” is a unique example of a work of art that has become an integral part of the city. Which is why the ‘City of Ghent Culture Prize’, which in 2009 was for art in public space, was awarded to Alberto Garutti.

The city council invites everyone to attend the ‘baby drink’ on Sint-Veerleplein at 8 pm on Friday 27th May.

Travellers at Gent-Sint-Pieters Station can see a photomontage more than a hundred metres long in Swiss artist Beat Streuli, in creative and art-loving city. the tunnel there. It is a work by the which he portrays Ghent as a lively,

The Gent-Sint-Pieters Project execution included the idea of integrating a work of art into the new tram tunnel. Art is after all an essential part of a creative city like Ghent, and therefore provides the ideal welcome. A competition was held and the S.M.A.K. selected seven artists together with the 'Gent-Sint-Pieters Art’ working party. Beat Streuli’s preliminary design was received with enthusiasm and the ‘Art in Public Space’ municipal working party also gave its approval.

Streuli is internationally renowned for his photo and video installations, in which he portrays people as they stroll about in the city. His wall at Gent-Sint-Pieters Station consists of several photographic panels behind glass, showing ordinary people during their everyday movements from one place to another.

TRACK is a joint venture by the S.M.A.K., the City of Ghent and the Flemish Community.