Between Eagles and Pioneers. Covering three principal themes - eagles, dogs and double portraits - the paintings on show attest the persistent vigour of his distinctive pictorial style and exploration of personal and collective narratives. The images of these paintings first appeared in the historic edition of the German newspaper 'Die Welt' on the occasion of the twentieth anniversary of German reunification last year. 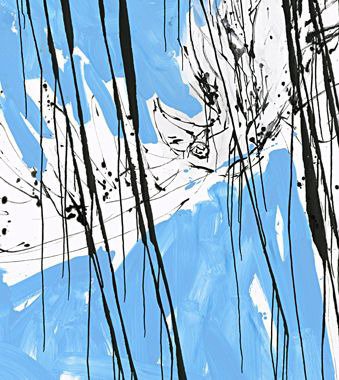 The images of these paintings first appeared in the historic edition of the German newspaper 'Die Welt' on the occasion of the twentieth anniversary of German reunification last year. Having grown up in East Germany before moving west as a student, Baselitz's work has long referenced aspects of German history and its cultural identity: as he has noted 'my pictures are content-heavy, just dripping with history'. For the 1 October 2010 edition, the newspaper reproduced Baselitz's paintings in lieu of all photographs, so that the works appeared as singular images, featuring in the international news, finance, culture, sports and editorial sections without reference to the articles they accompanied.

In the double portrait paintings, loosely grouped as 'Seid Bereit, Immer Bereit' ('Be Prepared, Always Prepared'), Baselitz takes as his starting point the slogan of the Young Pioneers movement, of which he and his wife were members as children. Whilst governed by the Communist party as a means of espousing its ideological principles, the organisation was more akin to the Scout movement in its primary emphasis on promoting outdoor skills and preparedness. In these paintings, two figures, upside-down, adopt the greeting of the Pioneers, one of whom is perched on a table; this device alludes to a painting by Otto Dix which has previously provided inspiration for Baselitz. Each variation draws upon different painterly techniques, with washes of acidic colour and pointillist strokes.

For the 'Hund' ('Dogs') and 'Adler' ('Eagles') paintings, Baselitz has revisited other motifs from his earlier work and art history. The symbolic appearance of the dog features in the 'Hero' paintings of the early 1960s, which in themselves ascribed to tropes of German Romanticism. In the current paintings, the hounds are located atop a mountain landscape, meeting the viewer's gaze with a ferocious intensity. For Baselitz, the eagle has also been a source of inspiration throughout his career. It is an emblem that has long appeared on the German coat of arms and is one of the oldest state symbols in Europe, although Baselitz maintains that it has no programmatic significance in his work. As the writer Michael Glover notes, 'the bird can look defiantly robust, noble, balletic, grandiose, almost symphonic, set as it is within the pomp and circumstance of the sky; in other paintings, it strikes us, with its desperately scrabbling claws, as quite pathetically weak, languid and inclined towards self-sacrifice'.

A fully illustrated catalogue, with a text by Michael Glover, will be published to accompany the exhibition.