'Everything Leads to Another' marks Matthew Day Jackson's first exhibition at Hauser & Wirth, presenting a major body of new works by the American artist across both gallery spaces. Regarded as one of the most engaging and inventive artists of his generation, Jackson's work is all-encompassing, seeking connections that exist between seemingly disparate themes. In the south gallery, the second half of the exhibition features work that deals with notions of mortality, or the material of being. 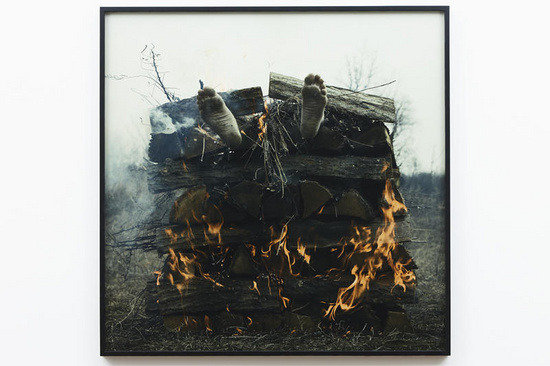 ‘In my work there is no past. History is a part of everything. Everything leads to another. As the sum of history moves out in 360 degrees from its center – which does not exist – it envelops the present. Perhaps you could say I am interested in moments of sublime beauty which carry their counterpart, otherwise known as terror, so closely that it is difficult to delineate one from the other. This has been the guide from the beginning. In my search for the edge, I meet heroes along the way and see myself reflected in the surfaces of the things I encounter’.

‘Everything Leads to Another’ marks Matthew Day Jackson’s first exhibition at Hauser & Wirth, presenting a major body of new works by the American artist across both gallery spaces. Regarded as one of the most engaging and inventive artists of his generation, Jackson’s work is all-encompassing, seeking connections that exist between seemingly disparate themes. As wide reaching as impressionist painting to the surface of the moon; art history to rap music; nuclear testing to paranormal activity; Jackson formally reconfigures his diverse, culturally loaded materials and forms, revealing the character of the world anew through telling juxtapositions.

‘Axis Mundi’ a sculpture re-purposing the cockpit of a B29 and ‘Reflections of the Sky’, the largest of Jackson’s moonscape works, dominate the space of the north gallery. The latter work, a long, panelled landscape replicating the format of Monet’s ‘Reflections of Clouds on the Water-Lily Pond’, creates an impression of the surface of the moon. Taken from a Mercator map, the moon’s surface is created through laser etching on a gypsum board. Otherwise known as Wallboard or Drywall, the inexpensive, mass-produced material often used in domestic interiors creates a melancholic image/object that discusses our need to conquer through exploration.

‘Axis Mundi’ is constructed from a reconditioned B29 cockpit – the first pressurised bomber and the aircraft model that dropped the atomic bomb on Hiroshima and Nagasaki. The exterior of the iconic nose section has been polished to a high mirror finish, bringing the surface back to near factory appearance. The cockpit retains its pressurising barrier, suggesting through abbreviated form the bomber as a space age craft. The interior of the nose houses a wunderkammer of anthropological and archaeological curiosities, referencing a Victorian-era natural history museum. Drawing parallels to the study of science and God, Jackson’s ‘Axis Mundi’ presents a modern day ark that suggests the location of the beginning of a new world through the use of the world’s most destructive technology.

In the south gallery, the second half of the exhibition features work that deals with notions of mortality, or the material of being. Many of the works refer directly to the artist’s body, and through photography and sculpture the human form is reimaged and reformed. Jackson states, ‘We are not simply flesh and bone, but also the materials through which we express ourselves to the world outside. The siding of our home, the brand of automobile that we drive to the clothes we wear, these things become who we are. Much, if not all of this is shared, so as I become me, I become you’.

Self-portraits exist in many different forms. These seemingly dissimilar forms and narratives are held together tightly through the use of materials and repurposed iconography and the meaning they imbue. Mounted on one wall are photographs of two life-sized food golems — one sweet and one savoury — that take the shape of Jackson’s body. On another wall, X-rays of surgically implanted metal body parts belonging to both male and female friends, acquaintances and total strangers are pieced together to create a skeleton rescaled to the artist’s proportions. Finally, ‘Me, Dead at 37’ continues an ongoing series of photographs documenting fantasy scenarios of the artist’s own death.

Also in the south gallery, new video works featuring the artist, his family and friends are presented in a living room environment. ‘Everything Leads to Another’, the work from which the exhibition takes its name, is a rap-pop hybrid confection created collaboratively with Tim Bright that takes the form of a music video, yet functions as a sort of press release. Written by Jackson, the lyrics are a meditation of creativity, exploring pop as a performance of attraction. ‘In Search of…Ghosts’ is a documentary based on the late 1970s American TV programme that investigated the paranormal and the unexplained. It discusses the formalisms of a haunting, and how the spectre of history makes itself known in the present. The film follows on from the first episode which tackled the subject of anthropomorphism as the primary lens that we use to understand nearly everything around us. Within this narrative, this first episode tracked the artist’s mysterious (and fictional) disappearance. ‘In Search of…Ghosts’ was shot on the site of the Apple II House used in the Nevada nuclear tests and features footage of the atomic bombings of Hiroshima and a submerged B29 sitting silently at the bottom of Lake Mead in Nevada.