On Translation: Museum. Begun in Helsinki in 1995, this group of twenty-seven works analyses the concept of 'translation' from a wide-ranging perspective, which tackles linguistic, economic, political and cultural issues. In this project, Muntadas approaches the concept of translation as an internal debate with the museum-institution itself, focusing on the way it represents and interprets a work which is located in quite different situations and contexts. 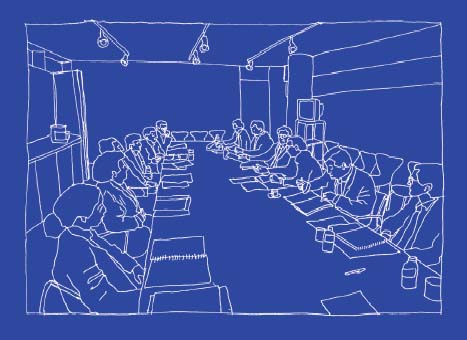 On Translation is a series
of works that explore
questions of transcription,
interpretation and translation.
From language to codes
From silence to technology
From subjectivity to objectivity
From agreement to wars
From private to public
From semiology to cryptography
The role of translation /
translators as a fact,
visible / invisible

The artistic activities of Muntadas (Barcelona, 1942) have been defined by a critical analysis of the role of the media in the symbolic construction of contemporary social reality. From the mid-1970s onwards his attention has focused on the environment created by what he calls the "media landscape": political propaganda, advertising, economic and ideological power groupings, and culture criticism.

On Translation: Museum is an exhibition in which the artistâ€™s projects from the On Translation series are reinterpreted. This project includes a group of works and installations arranged in various series, series in which Muntadas addresses the notion of translation in contemporary society and its influence on social rituals, economic negotiations and inter-communicative strategies.

Since the realization of the first scheme, On Translation: The Pavilion, in Helsinki in 1995, more than twenty versions of the series have been produced: On Translation: The Games, La mesa de negociaciÃ³n, The Internet Project, The Audience, The Monuments, El aplauso, The Transmission, etc.

This exhibition at the MACBA, which also brings together a number of earlier works and can be seen inside the museum as well as in different places in Barcelona and on the Internet, covers four essential aspects of Muntadasâ€™ work: architecture, the media, the city and the museum; an urban project realized especially for this occasion called On Translation: The Image, an on-line project sited in the projects section at http://www.macba.es; and an in-depth publication on the project called Muntadas. On Translation (Barcelona: MACBA / Actar, 2002).