The Complete Prints - George Economou collection. The Staatliche Graphische Sammlung Munchen has managed to secure as a long-term loan to Munich what is likely to be the most complete collection of Otto Dix's prints anywhere in the world, amassed over several decades. The Greek collector George Economou recently acquired this private collection of Dix's works containing 526 sheets. 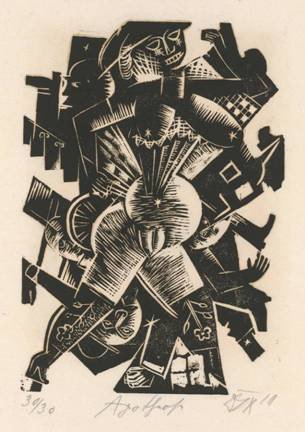 The Staatliche Graphische Sammlung München has managed to secure as a long-term loan to Munich what is likely to be the most complete collection of Otto Dix’s prints anywhere in the world, amassed over several decades. The Greek collector George Economou, who has long placed German 20th century art at the heart of his overall collection, recently acquired this private collection of Dix’s works containing 526 sheets. In February of this year Economou entrusted the collection to the care of the Staatliche Graphische Sammlung München.

As all sheets in George Economou’s collection have now been properly catalogued, the Staatliche Graphische Sammlung München would like to take the opportunity to present them officially to the press for the first time. The collector will be attending the presentation in person. A comprehensive exhibition of the collection is planned and is due to be accompanied by a symposium on the art of Otto Dix and on printmaking in particular.

Along with his contemporaries George Grosz and Max Beckmann, Otto Dix (1891–1969) is internationally considered one of the most important German painters from the high modernist period. Dix rose from the Expressionism and Dadaism of the 1910s to become one of the figures at the forefront of Neue Sachlichkeit (New Objectivity). With the advent of the Nazis in 1933, he was dismissed from his teaching post and withdrew into a period of inner exile, living on the banks of Lake Constance. Even after 1945 he remained committed to the object in art. Printmaking played a central role in his work at several stages in his lifetime. In his early exhibitions and in group shows the public were primarily presented with his woodcuts and etchings.

The cycle of etchings, Der Krieg (The War), from 1924 is one of the most important documents of an individual’s coming to grips with the atrocities of industrialized slaughter of the kind that the First World War unleashed and which Dix had to experience at first hand. Several of the colour lithographs that Dix created in the 1920s, managed to capture and crystallize the spirit of the age in a single, concise image. After 1945, Dix created a series of exceptionally elaborate colour lithographs that, alongside his impressive portraits and self-portraits, figure highly in his later work.

The permanent loan originally stems from the private estate of Berlin art dealer Florian Karsch, who compiled the catalogue raisonné of Otto Dix’s printed works. George Economou was able to secure the purchase of the complete collection from him.

This collection features an especially high number of state and trial proofs, some of which only survive in the form of a single copy. This means that, as a collection, it offers us a unique insight into the artist’s working practices regarding printmaking techniques and allows us to trace the steps he had to take in developing the final image.

In this way, the permanent loan from the George Economou collection also serves as an outstanding document of the wider history of printmaking in the 20th century.