With works and interventions by Isabelle Cornaro, Metahaven, Josef Dabernig, Neil Beloufa, Jill Magid, Nico Dockx and Kris Kimpe. This is the second of 3 presentations articulating the story of a fictional museum, an interplay of definitions of 'art' and the 'institution' in an accelerated scenario of rise, self-interrogation, fall, and possible rejuvenation. The exhibition frames divergent processes in a categorical quid-pro-quo where the drive to personify the artist is hardly distinguishable from that to personalize the institution. 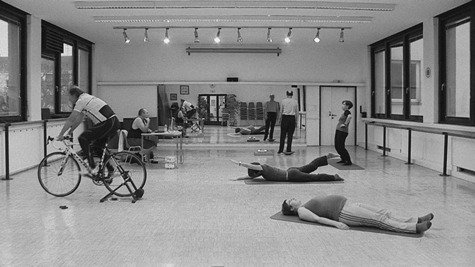 Museum of Display is the second of three presentations articulating the story of a fictional museum, an interplay of definitions of ‘art’ and the ‘institution’ in an accelerated scenario of rise, self-interrogation, fall, and possible rejuvenation. These presentations bring together works that make specific claims to how they want to be seen and understood, that project specific notions of the institutional space that would accommodate them. These demands and positions intersect throughout the series in distinct images of the ‘museum’, in models of how art can be shown and experienced.

The first episode, Museum of Speech, mapped out the model of a porous institution, traversed and resonated by the ‘voice’ of the artist, a de-centred and deregulated space for spontaneity and divergence. The last episode, A Slowdown at the Museum (2.9 - 23.10.2011), will see the ‘real world’ return in the form of a strike that interrupts the continuous history-writing that upholds the ‘museum’ and puts political disturbance centre-stage. In between, Museum of Display asks what is being shown when art is exhibited. The works and practices here take the showing of art as medium, as object of negotiation or contention, as a constitutive split between neutrality and fabrication – the fabrication of criteria, perspectives and frames.

What would a ‘museum of display’ exhibit? Itself, perhaps, as a densely populated hall of mirrors, or as a sequence of negotiations and immaterial transactions, revolving around progressively nebulous (artistic) objects. On display, there would be exfoliating layers of analysis, framing and extrapolation, the production of synonyms and antonyms, of separation and symmetry between objects and subjects. Were these operations, demarcating the presence of art and the presence of the art institution, to intersect in something almost palpable, it would be a near tangible screen for the projection of sociability and its cultural branding, of belonging and its political ownership. Such a space could be imagined as a parable of order and disorder, a discursive process wherein they measure and demonstrate each other, allowing the ‘museum’ to pose as one of the primary sites for the manifestation of civic society, for the rehearsal of unanimity or indignation. A ‘museum of display’ would be both a metaphor and a fragment of ideological consonance, the permanently staged accord between what we can imagine and who we are, with identity, defined and composed from a multiplicity of perspectives or ‘negatives’, as rhetorical hinge.

Museum of Display is the second episode in a series of presentations that look at definitions of ‘art’ and the ‘institution’ within the scenario of a fictional museum, accelerating from rise to self-interrogation, to collapse and possible renewal. It was preceded by Museum of Speech, which engaged – or museified – the model of the art institution as a site of declamation where divergent claims compete for a position of centrality, as a space of polyphonic spontaneity and symbolic deregulation. It will be followed by A Slowdown at the Museum, which pairs the model of the institution that sees itself as continuous with – or indistinct from – the ‘real world’ and the hypothesis of a strike, resulting in a delay in art-historical time, a breach in the archive of the present. Museum of Display returns to the long-established critical point that display is never innocent, that it speaks of itself in the third person, in relation to undisclosed criteria and purposes. Rather than confirm an indictment, or propose to de-construct display into an anterior, ‘natural’ state, the exhibition at Extra City engages display as a stage for the performance and regulation of identities. A stage shared by the generic selves that find in the ‘museum’ their allegorical, reversed portraits, and the pliable non-self of the institution, by two forms of organizing the intangible – encoding, decoding and seeking to contain one another.

The exhibition frames divergent processes in a categorical quid-pro-quo where the drive to personify the artist is hardly distinguishable from that to personalize the institution, transgression from what is being transgressed, artistic intention from institutional trompe l’oeil. Museum of Display thinks through these questions in relation to visual practices that break what display mends, that embody the insufficiencies display diagnoses. Whether this translates into inversions, refusals or interruptions, identity persists as the boundary across which oppositions are played out, as a trope for their presumed reconciliation or as the residue of mutual corrosion. If a condition of identitary unrest corresponded to a mode of indisplay, where no coherent entities can yet be presented, where – in their stead – there are pauses, blanks, interludes of uncertainty about ‘who’ is ‘what’ and about the fictions that normally link the ‘who’ to that ‘what’, then identity would become auxiliary, a prosthesis between fragments and imaginary wholes. The relation between the auxiliary and the constitutive, and the chameleonic mutations uniting the two, are examined in works where display becomes convoluted or cluttered, where it shows.

Josef Dabernig’s sculptures and films depart from the geometry that structures disciplinarian spaces, the ‘grids’ that allow these sites to invoke order, but also to disguise their modalities of control into axes of circulation and systems of inventory, to fuse coercion and serviceability. Dabernig’s functionally versatile grids are here installed in a figure/ ground relationship: a set design for a disciplinarian psychodrama, to which the artist’s recent film excursus on fitness is a disquieting prelude.

Jill Magid’s Becoming Tarden is the provisional conclusion of a work commissioned by the AIVD – the Netherlands Intelligence Service, to inaugurate a new headquarters for the agency. The Service gains the status of co-author of the work: its heavy-handed redaction of the conversations between artist and secret agents and the confiscation of the manuscript paradoxically function as a gradual activation of the complexity of the project.

Isabelle Cornaro’s Landscape with Poussin and Eye Witnesses (III) collapses artifice – that of landscape painting – and the idea of a judicial testimony, perhaps on the dissemblance between reality and representation. The installation compresses a collection of disjointed viewpoints and distances, a hypertrophy of nuances and ad hoc criteria.

A foreword to the artist’s participation in A Slowdown at the Museum, Nico Dockx’s intervention reconsiders the events – museological, rhetorical and political – of May 1968 at Palais des Beaux Arts in Brussels: the occupation of Victor Horta’s building did not result in a proposal for an anti-museum, but in a display structure to accommodate revolutionary polemics and political pathos. In conversation with writer Douglas Park, Dockx revisits a series of projects and proposals in which he reflected on the posterity of that moment and its possible contemporary translations.

Metahaven’s uncommissioned identity proposal for Extra City treats the ‘image’ of the institution as a form of adherence, rather than purification – instead of essentializing an artistic mission, the visual communication picks up and incorporates clues to the political context where it unfolds, it is coproduced by factors beyond institutional control and submerged in contingency. The ‘logo’ becomes an aggregate of determinations, and the ‘brand’ – a historical record of sorts.

Neïl Beloufa’s films do not deconstruct cinematic conventions, but un-build them, transcribe them in sculptural forms and terms and proceed to cut or tear them apart. In the two works presented here, French teenagers and (the ghosts of) Algerian terrorists inhabit unstable stages, assembled to obstruct or extend the movements of the camera, and not to accommodate narratives of transformation. Panning shots, dialogues, traces, segmented or cloned scenographies fictionalize each other to a point of filmic self-display, the artist’s proposed equivalent for the expectation of a climactic moment.

The exhibition also includes the second episode in Kris Kimpe’s architectural project for the series, which divides the space of the ‘museum’ into competing perspectives, each treating the other’s vanishing point as a blind spot, and a text by theorist and curator Helmut Draxler.