On the metaphor of growth / Lena Maria Thuring

The exhibition project takes place in three parallel exhibitions in the Kunstverein Hannover, the Kunsthaus Baselland and the Frankfurter Kunstverein. It brings together 28 contemporary artistic positions dealing with the concept of growth. The works are based on questions relating to biological cycles, the conditions of production and value creation, or confrontations with the ecological impact of an expansive economy. The title 'Kamikaze Style' expresses an atmospheric mood that can be found in the Lena Maria Thuring's three new videos which are shown. 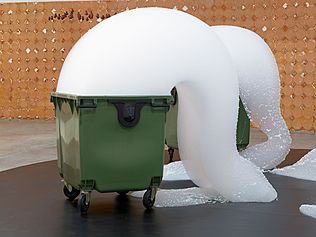 The international exhibition project On the Metaphor of Growth takes place in three parallel exhibitions in the Kunstverein Hannover (April 16–June 26, 2011), the Kunsthaus Baselland (May 21– July 10, 2011) and the Frankfurter Kunstverein (May 27–July 31, 2011). It brings together 28 contemporary artistic positions dealing with the concept of growth. The participating artists and groups of artists employ various approaches and media to explore the ambivalence inherent to the metaphor of growth as poised between prosperity and the belief in progress, on the one hand, and transience and renewal, on the other. The works are based on questions relating to biological cycles, the conditions of production and value creation, or confrontations with the ecological impact of an expansive economy.

Each institution realises an exhibition with its own compilation of artists and artworks and with a special program of accompanying events.

MADE POSSIBLE AND FUNDED BY: German Federal Cultural Foundation

The first institutional solo exhibition by Lena Maria Thüring (born in Arlesheim in 1981, lives and works in Zurich) bears the title, Kamikaze Style. This slang expression circumscribes a medical intervention without painkillers or simply denotes something wild or extreme. The title expresses an atmospheric mood that can be found in the artist’s three new videos, which are shown in Kunsthaus Baselland for the first time.

Lena Maria Thüring is known for her examination of socio-cultural and anthropological topics. The reflection on social systems and their construction by assigning them a specific place, as well as the combination of memory, history and space figure prominently in her work. She often positions those questions based on personal stories of individual people or groups, where the socio-cultural environment of the people portrayed also play an important part. The artist basically works in the media of photography, video and installation, while her most recent exhibition focuses on the three video portraits that were made recently.

Central to her latest works is the examination of a youth movement or the representatives of a younger contemporary generation of varying cultural and social origins who, due to their relativising look at the world and their own life, are nonetheless close to each other. The artist points to an attitude that can be compared to the one which forms the background to the so-called defiant gardens. It is proven that in war or other exceptional situations people try to retain a little piece of normality by creating a garden or their own place of relaxation where the world is still the way it should be – even if it is next to the trench. Metaphorically speaking all the portrayed persons find their individual defiant garden in the midst of their lives that are shaped by violence and crises.

During a stay at the Cité des Arts in Paris the artist met a Palestinian artist, who by referring to the scars on his hands talks about the follies that he committed during his youth. The video “String” (2011) only shows the hands and their movements, together with the voice of the storyteller. The political and social circumstances that he experienced in his youth during the second Intifada are included in his story only bit by bit. The artist, in whose work embroidered images play a role, only stops his aggressive and angry narrative style when he starts to embroider. Suddenly his accounts become calm and reflective. With the embroidery he has found his personal getaway. As recipients we realise how our preconceived image of a young Palestinian man suddenly becomes cracked. We find out how difficult it is to bring the absolutely normal problems of an adolescent in line with the problems of a society that is permanently at war. “You don’t think as an individual, but as a collective,” is one of his explanation for throwing stones, which has become a fixed routine for him on Friday evenings – notwithstanding the fact that he got the privilege to study in a Western country. His descriptions hold us enthralled and slowly we find links to our own experiences.

The artist met the young French policeman in the second new video work “Guardien de la paix (GPX)” (2011) during a visit to the Cité nationale de l’historie de l’immigration (previously Musée de la France d’Outre-mer and Musée des Arts d’Afrique et d’Océanie) in Paris. Since the opening of the building, there is an aquarium in the basement that contains fish from all the former French colonies, which the policeman regularly visits in his free time, and that presents itself as his personal defiant garden. The protagonist, whom we don’t see, but only hear, describes his difficulty to find a balance between his private life and his public function. He also must function in the collective of the statehood that is embodied by his uniform. Slowly we also hear his personal story, which tells about his parents’ origin in Guadeloupe and his daily routine as a policeman, when he often feels as if he is a “verbal waste bin of the world”. Due to the fish in the aquarium as a backdrop and the selection of his words that time and again makes references to the world of animals, his wish for harmony and non-violence directly affects us, and we only realise after some time that our image of a policeman has changed.

The third video “ZUP” (2011) is based on the work “chez eux” that was created in 2007. In the process Lena Maria Thüring had close contacts to hip hoppers from Mulhouse and dealt with their identity formation and the influence music and media play in it. For the current work she renewed her contact with the group. We see adults, adolescents and children. Their clothes take up various fashion styles and combine seemingly unconnected elements like a kaffiyeh with Burberry jackets and baseball caps. In their poses and gestures they demonstrate danger, by which they consciously accommodate a stereotyped public image – along the lines of “You think that I am dangerous, so I will show you how dangerous I am”. With their music they find their piece of defiant garden.

The video portraits show people who are confronted with violence in different ways, who fight with the discrepancies between their self-perception and the perception of others, who are aware of the incompatibility between individual wishes and collective compulsion and who are used to choose between allowing for the personal or giving preference to anonymity. At first sight the style of the video works appears to be that of a documentary. But the artist also includes fictitious elements by staging the visually visible, which either insists on the singular concentration of one detail, or even fades out the person who speaks, or shows the portrayed people from a certain staged angle. She thereby plays with the staging of closeness and distance, which in each case is selected according to the portrayed individual and his stories. Thüring’s sensitive handling of complex topics and individual narrations has by now become one of her most important hallmarks.

Opening: May 20, 2011, 7 pm
with an introduciton into the exhibitions by Sabine Schaschl, Director Kunsthaus Baselland; followed by a Barbecue