Figure in the Garden, a new installation of figurative works from the late 19th century to the present day. The exhibition includes 18 sculptures from the Museum's collection by Katharina Fritsch, Auguste Rodin, Pablo Picasso, Joan Miro', Max Ernst, Alberto Giacometti, Henry Moore... Cy Twombly: Sculpture is an exhibition of seven recently acquired works. These sculptures are generally made from found materials, plaster, wood, and white paint, and their humble origins remain readily evident in the finished works. 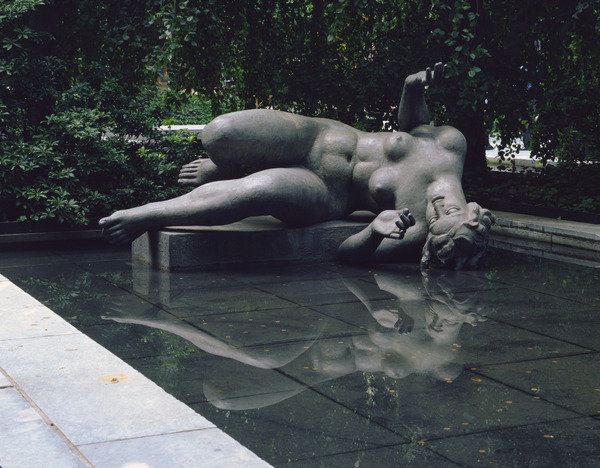 The Museum of Modern Art presents Cy Twombly: Sculpture, an exhibition of seven sculptures recently acquired from the artist’s collection, ranging in date from 1954 to 2005. These sculptures, the first by Twombly to enter the Museum’s collection, will be on view from May 20 through January 2, 2012. Cy Twombly: Sculpture is organized by Ann Temkin, The Marie-Josée and Henry Kravis Chief Curator of Painting and Sculpture, The Museum of Modern Art.

Twombly’s sculptures are an integral but little known aspect of his practice over the course of the last six decades. These works are generally made from found materials, plaster, wood, and white paint, and their humble origins remain readily evident in the finished works. Most are intimate in scale, because it is important to the artist that he be able to manipulate the works himself in the studio. The place where a work is made is significant for Twombly; he created the sculptures on display in studios in New York City, Rome, Naples, Florida, and Virginia over five decades, and in each place he has found the materials that make up each sculpture.

Twombly’s sculptures engage in an ongoing dialogue with his paintings, due in part to their own richly painted surfaces. Two recently acquired paintings by Twombly hang near the sculptures within The Alfred H. Barr Painting and Sculpture Galleries. Tiznit, one of a small number of paintings that Twombly made in New York City during the summer of 1953, is the earliest work by the artist in MoMA’s collection. Academy, painted in New York in the summer of 1955, presents the birth of Twombly’s own artistic language: legible letters and words give way to scrawling and scribbling, jittery lines, and scratches, with the artist reconfiguring the acts of writing, drawing, and painting in order to provoke a new way of seeing.

The exhibition is made possible by BNP Paribas.

Figure in the Garden

Figure in the Garden, the newest installation in MoMA’s Abby Aldrich Rockefeller Sculpture Garden, brings together figurative works from the late 19th century to the present day. The exhibition, which includes 18 sculptures from the Museum’s collection, opens on May 20, 2011, and is on view for one year. It is organized by Ann Temkin, The MarieJosée and Henry Kravis Chief Curator of Painting and Sculpture, The Museum of Modern Art.

Making its debut at MoMA is Figurengruppe/Group of Figures by Katharina Fritsch (German, b. 1956). Conceived in 2006–08, the work features nine life-size sculptures of, among others, St. Michael, a Madonna, a giant, a snake, and a set of skeleton feet, all rendered in precise detail and finished in bold colors. Religious symbolism and references to mythology abound, yet any fixed meaning remains open and elusive. Group of Figures is surrounded by earlier works such as Auguste Rodin’s heroic St. John the Baptist Preaching (1878–80) and Aristide Maillol’s pensive Mediterranean (1902–05).

Striking a casual pose in his derby hat is Elie Nadelman’s Man in the Open Air (c. 1915), and perched atop a tall pedestal is Gaston Lachaise’s open-armed, voluptuous Floating Figure (1927). Perennial favorites like Pablo Picasso’s She-Goat (1950) and Joan Miró’s Moonbird (1966) are on view as well, in addition to works by Renée Sintenis, Max Ernst, Alberto Giacometti, Henri Matisse, Henry Moore, and Tom Otterness.

The exhibition is made possible by a partnership with Volkswagen of America.