Souvenirs of Mysterious Seas, from the expedition to the Aquarium. It is the result of a 18 month research project by artist Mark Dion at the initiative of the Nouveau Musee National de Monaco (NMNM) taking place at Villa Paloma and the Oceanographic Museum. A group exhibition of over 20 artists, ranging from the work of naturalists such as Ernst Heackel, the surrealists and filmmakers Man Ray and Jean Painleve', to artists currently working with the ocean. A survey of works by Mark Dion, demonstrating twenty years of research and commitment to the subject of the ocean and its material culture. 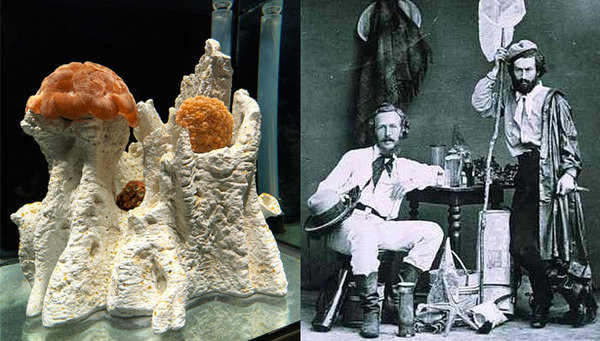 Oceanomania: Souvenirs of Mysterious Seas, from the expedition to the aquarium is the result of a 18 month research project by artist Mark Dion at the initiative of the Nouveau Musée National de Monaco (NMNM), taking place at Villa Paloma (NMNM) and the Oceanographic Museum. Continuing his investigations as a naturalist, archaeologist and traveler, as well as his dedication and interest in museology and the ecology of the Oceans, Dion's approach to the exhibition starts with two observations:

The recently completed Census of Marine Life (2010) which confirms that in some ocean environments up to 80% of species are still yet to be discovered, at a time when the ocean's animal diversity are undergoing massive depletion; and the Deepwater Horizon oil rig explosion, which has long-term repercussions on the environment of an entire region of the world and whose consequences still have yet to be measured.

This section of the exhibition engages with the sea as metaphor for the human psyche, the expedition as allegory and a form of artistic research. It also puts forth the less heroic figure of the invisible sea laborer, and the immigrant refugee, and specific representations and fantasies associated to marine life. The exhibition at the NMNM houses exhibitions within exhibitions, incorporating a selection from the NMNM's collection in what is titled "Davey Jones locker." Imagined as an underwater treasure room, it includes works from the collection relating by near or by far to the ocean, such as paintings by Lucio Fontana, Claude-Monet, J.M.W. Turner and Alphonse Visconti.

This section also includes 7 large-scale paintings of Bernard Buffet dating from 1989 that are based on Twenty Thousand Leagues under the Sea, inspired by Alphonse de Neuville and Edouard Riou engravings, highlighting the character of Nemo, both a collector, a scientist, and a renegade whose vision of technology and the ocean has inspired and forewarned generations. These paintings reinforce the viewer's sensation of being in an enclosed space underwater for most of this section of the exhibition.

One of the most significant and largest curiosity cabinets of the sea has been commissioned at the Oceanographic Museum, rearranging and pulling from obscure corners, the museum's collection of specimen, artifacts and artworks. This new commission is accompanied by a survey of works by Mark Dion, demonstrating twenty years of research and commitment to the subject of the ocean and its material culture, placed within the museum's permanent and temporary displays.

The exhibition as a whole acts as a reminder of the neglectful exploitation of a rich and diverse aquatic life and mineral resources, playing on the sentiments of wonder, the marvelous, melancholia, and the apocalyptic, subject to the changing myths of the times and the market.

The exhibition at the NMNM was developed within the framework of "Training for a Museum" with exhibitions previously conceived by Yinka Shonibare and Thomas Demand. As a whole, Dion's work for OCEANOMANIA, is as much with the museums, and their particular staff members as it is about the museums themselves, also re-questioning the values the institutions attribute to their respective collections, the role of the artist, curator and researcher, and their positions in constructing multiple narratives and the culture of our times.

OCEANOMANIA is based on a general concept by Mark Dion.

A publication coedited by the NMNM and MackBooks will be available in July.