Strategies of Disappearance. More than 30 works by international artists discus the individual, social and political aspects of disappearance: films, videos, artist books, installations, objects and photographs are addressing phenomena and events of the loss of identity, people and things. 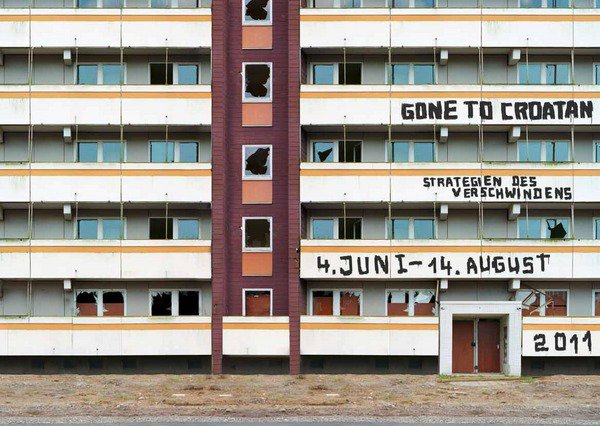 Dortmund, 3 June 2011. The Hartware MedienKunstVerein (HMKV) will open its first exhibition in the space for temporary exhibitions on the sixth floor of the Dortmunder U with Gone to Croatan – Strategies of Disappearance on Friday, 3 June 2011. More than 30 works by international artists will discuss the individual, social and political aspects of disappearance. Films, videos, artist books, installations, objects and photographs are addressing phenomena and events of the loss of identity, people and things. On the opening weekend which is also the last weekend of Barbara Breitenfellnerʼs „Dream of an Exhibition“, both of HMKVʼs exhibitions (3rd and 6th floor) will be free of charge from Friday, 6 pm, until Sunday, 6 pm.

The first European colonists in the New World disappeared leaving behind the settlements and a paper note with the words 'Gone to the Croatan'. The Croatan were an Indian tribe living in neighbouring territories. They are said to have murdered the settlers, however, reports concerning green-eyed Indians seem to contradict that version of events. A hypothesis suggests that the settlers went on a trip into another dimension.

Exhibition highlights
Two black-and-white, silent films by Bas Jan Ader will be shown referring to the unavoidability of failure and yielding to defeat which also appear in Aderʼs last undertaking – the crossing of the Atlantic where he was lost. Dressed in a traditional mime artistʼs costume the artist is appearing in situations that might be called genuinely tragic. Although featuring elements of slapstick, both works refer to the unavoidability of failure and yielding to defeat. Ader draws upon the tradition personalized by Buster Keaton – the alienated comedian waging a private war against the world. Bringing to mind such icons of counterculture as the Residents, Thomas Pynchon or Luther Blissett, Julita Wójcikʼs draft on cardboard and sculpture „Invisible Hand Also Means You!“ subversively reveals the utter impossibility of escaping the Internet. The animal film-odyssey of Fischli & Weissʼ „The Point of Least Resistance“ reflects upon the rules governing the nature of the world and finally discovers primaeval joy in music.

Re-discovery of topism and Collective Actions
The exhbition also comprises a sensational re-discovery of a great artist who dissappeared for years: With the presentation of Eduard Buridanʼs collages of map fragments the work of the French founder of Topism is recognized internationally for the first time. Hubert Czerepokʼs „The Norm of Lost 50 Micrograms“ deals with the recent discovery of the loss of weight of the standard kilogram kept in the International Bureau of Weights and Measures in Sèvres, southwest of Paris. Since 1889 this prototype has lost 50 micrograms. Where did hundreds of thousands of kilograms have suddenly disappeared? Are they gone never to come back or are they simply mislaid?
In the context of Gone to Croatan – Strategies of Disappearance the group Collective Actions (who are representing Russia in this yearʼs Venice Biennial) shows documentations of actions that have been realized in the 1970s during their „Trips outside of the City“. In his video Gospels the Swedish artist Erik Bünger dedicates himself to a proof of Godʼs existence, while Katarzyna Krakowiak goes on a trip to an unbuilt city founded in 1958 in the Mojave desert. These and many more artistsʼ projects are to be discovered in Gone to Croatan – Strategies of Disappearance.

Disappearance is generally associated with defeat. What is invisible is external to public life, and the invisible have no influence on the direction a community is taking. What will happen, however, if we scrutinise specific gestures? When shall we face attitudes that perceive the act of 'descending underground' as part of a strategy? Such small-scale practices frequently constitute exercises in a Utopia, which – although unattainable on a global scale – may be available to the individual.

Social exclusion can take many forms. It may result from unfavourable circumstances, or from an autonomous decision taken by an individual wishing to be excluded. The project aims at exploring these practices and their causes with special attention given to the variety of gestures establishing private utopias. Works and gestures that have come to light during the project Gone to Croatan reveal real stories of disappearance and detective search for traces of what has become ghostly, and confront them with artistic fiction taking up the theme of self-exclusion.

In exchange of HMKVʼs exhibition “Awake are only the Spirits“ – On Ghosts and their Media (2009-2010) at the Centre of Contemporary Art ʻZnaki Czasuʼ in Torun (Centrum Sztuki Współczesnej Znaki Czasu w Toruniu), HMKV invited the curators Robert Rumas and Daniel Muzyczuk to bring their exhibition Gone to Croatan (realised in 2009 in Torun) to the Dortmunder U. The 2011 exhibition establishes a reference to HMKVʼs exhibition on Disappearance, Loss of World and Escaping the World (PHOENIX Halle Dortmund, 2005), and conceptually extends the topic into new territories.

Guided exhibition tours:
Each Thursday at 19:00 and each Sunday at 17:00
HMKV at the Dortmunder U, 6th floor (included in the admission)
If you would like to book a private guided tour, please contact us via info@hmkv.de.