An exhibition of vintage photographs from the 30's by French photographer and filmmaker Jean Painleve'. The exhibition, curated by Patricia Laligant, will be on view in the Project Room. 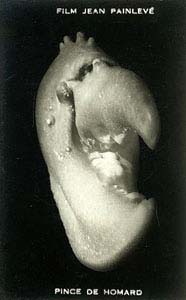 
Opening Reception: Thursday December 5, from 6 to 8pm
With a special screening of Jean PainlevÃ©'s films on opening night


Cristinerose / Josee Bienvenu Gallery is pleased to announce an exhibition of vintage photographs from the 30's by French photographer and filmmaker Jean PainlevÃ©. The exhibition, curated by Patricia Laligant, will be on view in the Project Room from December 5 through January 11, 2003.

In Paris in the mid -1920's, a new type of film was emerging: experimental shorts by artists rebelling against "the banality of commercial cinema". To accommodate these new films, cinÃ©-clubs were forming throughout France, screening such films as Fernand LÃ©ger's Ballet Mecanique, RenÃ© Clair's Entr'acte, and Luis Bunuel's Un Chien Andalou and l'Age d'Or.

Jean PainlevÃ©, son of French mathematician and statesman Paul PainlevÃ©, started his film career while a natural history student at the Sorbonne. In 1928, his first movie recorded the evolution and fertilization of the stickleback's egg. Both scientist and filmmaker, Jean PainlevÃ© openly asserted the bonds connecting him to the work of Etienne Jules Marey, pioneering physiologist and inventor of the chronophotographe, the early camera that had inspired the LumiÃ¨re brothers to conceive their cinÃ©matographe.

One of the first to plunge underwater with a camera and bring the sub-aquatic world to the screen, maverick scientific documentary filmmaker Jean PainlevÃ© captured the throes of a male seahorse giving birth, the geometric choreography of crystal formation, and the mating habits of hermaphrodite mollusks. PainlevÃ© made over 200 films including The Seahorse, Freshwater Assassins, and The Love Life of the Octopus, to name a few.

In 1924, PainlevÃ© along with the German playwright and poet Ivan Goll, Guillaume Apollinaire, RenÃ© Crevel, Pierre Reverdy and others, published the first and only issue of the review SurrÃ©alisme. Man Ray borrowed footage of starfish from PainlevÃ© to use in his own film L'Etoile de Mer and Georges Bataille published PainlevÃ©'s stills of crustaceans in his review Documents. PainlevÃ©'s stills and photographs were published in numerous magazines of the time including Jazz, Vu, Voila, and Art et MÃ©decine. His photographs are included in the collections of the Metropolitan Museum of Art, The Art Institute of Chicago and the MusÃ©e d'Art Moderne de la Ville de Paris.

Most of the photographs in the exhibition are vintage stills from his films. Featured, a living Sea Anemone 1930 next to some Sea Urchin Pedicels 1928, as well as a Butterfly 1930 and a Seahorse 1934, PainlevÃ©'s fetish animal. The close-ups and sharpness of details enabled by the microscope in Rostrum on the Nose of a Shrimp 1930, in Detail of the Shrimp Tail 1929, as well as in Seahorse Chromatophores 1934, are remarkable. Lobster Claw or De Gaulle 1930 is probably the most famous image resulting from the collaboration between PainlevÃ© and Eli Lotar. The photographs surprise by their level of abstraction and reveal the accidental beauty of the sub-aquatic world.