The second in a series devoted to the cannibalization of cultural signifiers, it is a reflection of the polyglotism going on in contemporary art. Craft, folk, outsider, non-western, decorative, applied art, pop, Dada, social media, and poetry, are devoured whole then synthesized. The artist's self-aware strategies, a formal trans-coding of each fragment occurs allowing for a mediation of images and contexts. 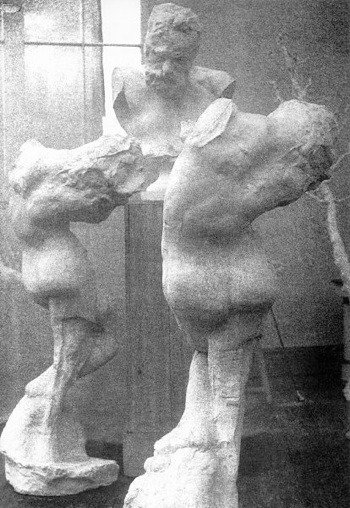 The second in a series devoted to the cannibalization of cultural signifiers, The Cannibal's Muse II is a reflection of the polyglotism going on in contemporary art. Craft, folk, outsider, non-western, decorative, applied art, pop, Dada, social media, and poetry, are devoured whole then synthesized.

An intertwining of traditions and integrity of materials encompass heterogeneity and vitality of expression. The strength of the artists lies in their formal clarity rather than naturalism. Many of the ideas of primitivism and modernity from a hundred years ago can also be found in this early 21st century. Within these parameters, the paintings, sculptures, drawings, and music videos owe their frames of aesthetic references to a conjugation of histories.

Through art historical precedents and the artist's self-aware strategies, a formal trans-coding of each fragment occurs allowing for a mediation of images and contexts. Within this decentralized referential field, linear history is no longer the supreme measure to classify and rank signifier's. One code to another code is a translation of one big idea.

In its overtly ritualistic double consciousness (JUNG) a broken and sparkling fracture in the gaps of media are unified; their separate distinctions are now closer together. The artist, priest, and artisan have become one; the master narrative is dead.

There may be poetic implications, and an impulse to breath truth into outmoded ideologies. Because the dead master narrative is overtly subversive it feeds itself the useful cognitive associations and discards the superfluous loose ends. Its mysterium is its own enthronement, not because of homogeneity but despite it. It is not fractured but made whole by fractious calculation. There are no servant narratives so much as there is one big overarching idea. Since there is only one big idea art thus quantifies the value of that one big idea in immortal ways.

As the shifty old paradigm wobbles, the archaic and antiquity come to the fore in much of contemporary art. Amidst collectivity and destabilized cultural signposts the artist's iconoclastic individualism carves out a zone of stability within a thousand points of light. Due to the virtual interface what used to be canonized is now cannibalized through an overlap of images. Still the muse must be conjured, and reconnect us to the relics of antiquity.

Max Henry is an independent curator and critic.

"Autocenter", operated by Joep van Liefland and Maik Schierloh was founded in 2001 as a non-profit-space for art in a former auto body shop in Berlin's district of Friedrichshain beyond the conventions of the art market. After ten years the former off-space emerged as a central player in the self-negotiation of the Berlin art scene under the motto: "… art history happens here, before it is written." Since then more than 400 artists have exhibited in 120 shows on 333 sqm exhibition ground amongst them established artists like Karl-Horst Hödicke, Elke Krystufek, Jonathan Meese, Omer Fast, Thomas Scheibitz, Eberhard Havekost, Amelie von Wulffen, and Cyprien Gaillard, but also young international ones like Aids3D.