Karl Haendel's large-scale graphite works are drawings of appropriated images or the artist's own drawings, words or photographs. He projects them onto large Arche paper and draws their contours, shading and gradations. Using light as his medium, Spencer Finch's works deal with notions of perception and the experience of time. He keeps pursuing an ineffable moment where past and present, memory and instant meet; personal desire and world history collide. 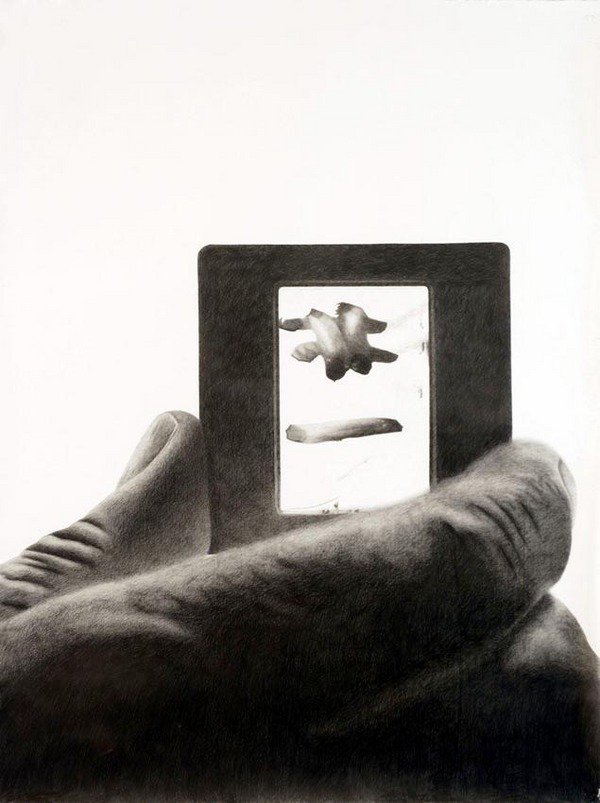 Yvon Lambert is pleased to announce Karl Haendel’s first solo exhibition in France. It will feature new drawings and works on paper and two installations. The exhibition opens on Thursday, June 9 from 6-8pm and will be on view until July 2, 2011. Karl Haendel’s large-scale graphite works are drawings of appropriated images or the artist’s own drawings, words or photographs. He projects them onto large Arche paper and draws their contours, shading and gradations.

On this technique he noted “using projector is a way to change the scale and understand the effect of differently scaled images on the static scale of the human body. The idea of scale suggests that there is a standard size of a certain thing and it’s noticeable when you deviate from it.”1 Haendel’s drawings can be figurative or abstract and come from various sources: text-based or photorealistic images, scribbles, comics, newspapers or political commentaries. Haendel arranges these intentionally diverse images in temporary groupings that only exist for his exhibitions. Works are grouped for their formal links (comparing and contrasting sense of gravity and weight, interior and exterior, light and shadow) or conceptual links, often relating to his personal experience, in order to shift their meaning and symbolic possibilities.

The two installations Your charms have broken many a heart and mine is surely one, You got a way of tearin' the world apart, love, see what you've done. (Sugarbaby #1) and You can’t turn back—you can’t come back, sometimes we push too far. One day you’ll open up your eyes and you’ll see where we are. (Sugarbaby #4) are titled after the lyrics of the song Sugar Baby, recorded in 1927 by Dock Boggs and later sang by Bob Dylan who was greatly influence by Boggs.

These complex structures of intersected graphite and acrylic drawings mounted on boards with 16mm film projections seem to illustrate Greil Marcus's words on Boggs's "primitive-modernist music". In his book Invisible Republic: Bob Dylan's Basement Tapes, Marcus writes "Dock Boggs made a primitive-modernist music (...). Primitive because the music was put together out of junk you could find in anyone’s yard (...); modernist because the music was about choices you made in a world a disinterested god had plainly left to its own devices, a world where only art or revolution, the symbolic remaking of the world, could take you out of yourself".2

Karl Haendel's works illustrate how chains of signification work. There are many possible chains or associations in this exhibition. He leaves it up to the viewer to make his or her own.

Yvon Lambert is pleased to present Spencer Finch’s 3rd exhibition at the gallery. The show will open June 9th, 2011 and will be on view until July 2nd, 2011. The exhibition opens on Thursday, June 9 from 6-8pm and will be on view until July 2, 2011. Using light as his medium, Spencer Finch’s works deal with notions of perception and the experience of time. He keeps pursuing an ineffable moment where past and present, memory and instant meet; personal desire and world history collide.

After visiting loaded, historic places such as the cave of Lascaux, this new project relates to William Shakespeare play, Hamlet. Through an LED installation, Spencer Finch offers a sparkling fireflies night, each light playing a different character part, their intensity and movement representing each personality and move. Spencer Finch creates an atmosphere exalting mystery and fantasy - a dream place combining darkness and light, angst and delight. The arisen dichotomy is inspired by the 3rd act of Hamlet where the tension reaches its peak – the act shedding the light on the characters’ real nature, revealing its hero in the sublime of his existential contemplation (To be or not to be?) but also in the uttermost cruelty of his human condition.

Exploring through light the spiritual and emotional conflicts of each individual, Spencer Finch embraces a certain idea of romanticism and invites the audience to reflexion and introspection.

Spencer Finch is born in New Haven in Connecticut in 1962; he lives and works in Brooklyn. In 2007, his work featured in a retrospective at the MASS MoCA of North Adams, Massachusetts. Spencer Finch has a current exhibition at the Folkestone Triennal in the United Kingdom and his next 2011 exhibitions will take place at the Emily Dickinson Museum in Amherst, Massachusetts, at the Indianapolis Museum in Indiana, and also at the Art Institute of Chicago Museum in Illinois.

Please contact Didier Barroso with any press inquiries at didier@yvon-lambert.com or +33142710933

The exhibitions opens on Thursday, June 9 from 6-8pm