Medley. The work of Lavier is often classified as appropriation art; art that borrows elements from art history and general cultural imagery. Lavier does not limit himself, however, to appropriating existing elements and presenting them in an exhibition context. 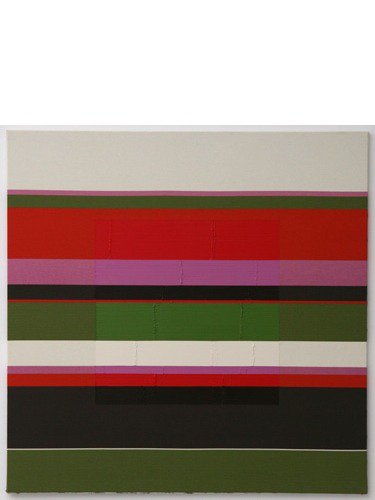 Xavier Hufkens Gallery is pleased to announce a new exhibition by Bertrand Lavier. Medley is the third solo exhibition of the artist with the gallery. The work of Bertrand Lavier (1949, Châtillon-sur-Seine) is often classified as appropriation art; art that borrows elements from art history and general cultural imagery. Lavier does not limit himself, however, to appropriating existing elements and presenting them in an exhibition context. The objects often undergo a transformation in terms of texture and material.

He coats the most diverse objects – a transistor radio, a Ferrari, a ladder – with thick layers of paint. This turns the utilitarian object, which still is operational, into an artwork. The painterly action is essential and Lavier deliberately opts for an expressionist style that gives the industrial object a personal touch. The artist also detects a pictorial or sculptural potential in everyday elements, such as shop windows which have been painted over, or the twisted wreckage of cars or motorbikes that were in accidents.

In his exhibition Medley, the artist introduces a dozen objects that are representative of his artistic practice. Central to his oeuvre is the juxtaposition of high art and low culture. Lavier borrows motifs from the canon of art history (a painted mobile evoking the work of Alexander Calder, a neon sculpture made after a painting of Frank Stella, a lithograph of Joseph Albers painted over, etc.) as well as from popular culture: Walt Disney cartoons for example. For The Walt Disney Production Series his point of departure is a cartoon from 1947 in which Mickey and Minnie Mouse are walking through a museum of modern art. The museum in the cartoon exhibits fictitious artworks with a modernist idiom. Lavier brings a number of these fictitious works, these Disney-style parodies of the art at the time, to life, turning them into autonomous sculptures and paintings.

The artist is like an archaeologist of the post-industrial era. He has had a damaged canoe repaired with great care by archaeology restoration experts as if it were a priceless relict from the past, while bronze casts of African objects are treated with a layer of nickel, so that they come to resemble modern artworks. In his oeuvre, not lacking for humour, Lavier raises some pertinent questions about the aura of art and the fetishism of the object.

Bertrand Lavier lives and works in Paris and Aignay-le-Duc. His work has been exhibited around the world in numerous leading art institutes, including the Centre Pompidou and ARC/Musée National de la Ville de Paris in Paris; the Guggenheim Museum New York; PS1 New York; Castello di Rivoli in Turin; the Luigi Pecci Centre for Contemporary Art in Prato; Villa Medicis in Rome and the Musée Hermès in Seoul. His work has also been included in Documenta in 1982 and 1987.