Late fabric sculptures and gouaches by Louise Bourgeois, an undercurrent running throughout the exhibition is the eternal oscillation between masculinity and femininity. David Noonan presents large-scale, screen-printed linen collages. 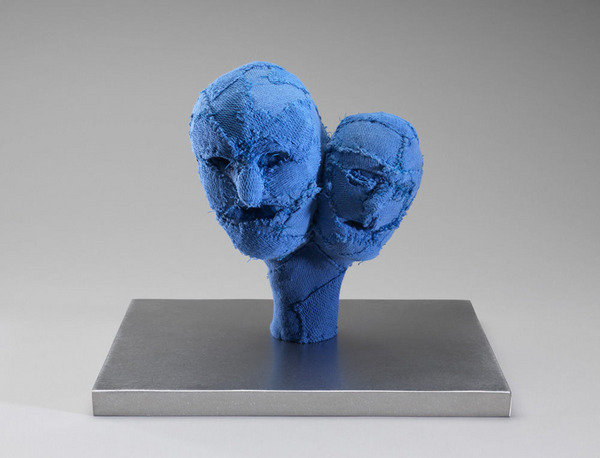 Xavier Hufkens is pleased to announce an exhibition of late fabric sculptures and gouaches by Louise Bourgeois (1911-2010). The show will be accompanied by a catalogue featuring an essay by Philip Larratt-Smith.
For Louise Bourgeois, fabric and sewing held great symbolic significance. Born into a family of tapestry restorers, she was surrounded by textiles as a child, and was witness to her mother’s constant efforts at conservation and repair. Bourgeois also helped in the atelier, drawing in the missing parts of tapestries that needed reweaving. The artist came to associate sewing with reconstruction, reparation and reconciliation. In contrast to her earlier bodies of work, in which aggressive acts of separation, like cutting and carving, were predominant, Bourgeois’s late work focused on joining elements together, a restorative act that helped to dispel anxiety and her life-long fear of abandonment.

Bourgeois began making her fabric heads when she was in her eighties. To make these sculptures, which were mostly cut and crafted from the same bolt of cloth, she constructed an inner core and gradually added layers of fabric, hand-stitching the features as the form progressed. The crude stitching, loose threads and raw edges achieve an immediacy and directness that is reminiscent of her drawings. As Larratt-Smith notes in his text, the artist also associated colours with specific emotions or symbolic meanings. The intense blue of the heads exhibited here represents melancholia, suffering and acédie. It is also the colour of twilight and creativity: the threshold between day and night, conscious and unconscious, and the passage from one state to another.
The largest and most complex piece, Cell XXVIII (Portrait), is typical of the self-enclosed ‘Cell’ structures that became an important feature of Bourgeois’s late work. Made from salvaged architectural materials, and incorporating found objects along with her own fabric sculptures, the assemblages explore a deeply personal narrative, revolving around the themes of architecture, memory, and the five senses. A subset of the ‘Cells,’ the ‘Portrait Cells’ present a concentrated portrait of a psychological or emotional state, and usually give prominence to the human head as the seat of identity. Cell XXVIII (Portrait) is a symbolic representation of the family dynamic. As Larratt-Smith describes, five heads, all hanging upside down, are “physically isolated from each other, yet imprisoned together within the same jail-like cage.” For Bourgeois, five elements always represented the family unit.

An undercurrent running throughout the exhibition is the eternal oscillation between masculinity and femininity, life and death, creativity and inertia. As Bourgeois famously stated, she had her ‘pink days’ (good, productive, creative) and ‘blue days’ (unproductive, filled with despair). Remaining within a compressed but intense emotional range, the ‘blue’ heads tend to have a fixed identity, which is consistent with her depictions of the male figure. This is counterbalanced by the instability and mutability of the brilliant pink and red gouache drawings of female figures, which the artist made by working ‘wet on wet’. This technique allowed the element of chance to shape the final outcome of her working process. With their full breasts and rounded stomachs, the figures are a lasting testament to Bourgeois’s preoccupation with sexuality, pregnancy, motherhood, and the cycles of life.

Louise Bourgeois was born in Paris in 1911 and died in New York in 2010. Her work is represented in the collections of important art institutions throughout the world, and continues to be exhibited on the international stage. Monographic exhibitions in 2015 included Louise Bourgeois. Works on Paper, Tate Modern, London; Louise Bourgeois. I Have Been to Hell and Back, Moderna Museet, Stockholm, Sweden (travelling to Museo Picasso, Málaga, Spain); Louise Bourgeois. Structures of Existence: The Cells, Haus der Kunst, Munich, Germany (travelling to the Museum of Contemporary Art, Moscow, Russia, and the Louisiana Museum of Modern Art, Humlebaek, Denmark during 2015-17).

Since he moved to London from his native Australia in 2005, David Noonan has been working on large-scale, screen-printed linen collages. Co-existing alongside his sculptural and film works, they combine figurative imagery with abstract motifs borrowed from antique textiles, and are inspired by his extensive and ever-expanding archive of visual material – an eclectic repository of books, photographs and magazines that he has built up over several decades. Noonan’s associative compositions often trigger a sense of melancholy and mystery. On one level, this is related to the artist’s preference for a monochrome palette and his use of largely historical imagery. On another, subliminal level, it emanates from the enigmatic contrasts and juxtapositions within the works themselves, and through the visual dialogues that are established when viewed as an installation.

Noonan’s latest works mark an aesthetic and technical departure for the artist. Like his earlier works, each screen-print conflates two distinct visual layers: found images of figures or animals, inevitably gleaned from publications, and self-generated photographs of vintage textiles, many of which also belong to the artist. In Noonan’s hands, these two contrasting types of photograph – the found and the authored – dissolve into a single, indivisible image. What sets these new works apart, however, is their graphic intensity and unprecedented tonal range – the result of a technical advance on the part of the artist. By staining the raw linen with a thin layer of warm grey pigment, Noonan was able to capture and print a greater tonal range. The thin layer of pigment still allowed the artist to tear the fabric leaving a natural raw edge to the linen, an important element to activating the picture’s surface. In keeping with the cool shift in pallet, the artist has also opted for minimal black steel frames. These frames are not painted and maintain an element of their natural patina.

While viewers well known with Noonan’s oeuvre will recognise familiar imagery (owls, theatrical situations, masks), the mood is different. Rather than collate multiple images from different sources, the artist has chosen to isolate single figures within indeterminate spaces. The overall effect is eerily still and sculptural. Similarly, the Japanese textiles that Noonan once favoured have been replaced by irregular patchworks of traditional European and American fabrics – ticking, indigo and gingham, as well as occasional floral and geometric prints – all of which have been hand-stitched into quilts, or quilt-like formations. The utilitarian fabrics and their haphazard assembly point to thrift and the careful preservation of scarce resources. Yet the luminosity of the randomly scattered tufted stiches add a rich complexity to the visual field. Although the works are ultimately flat and two-dimensional, the heightened contrasts and detailed textural rendering creates an obvious trompe l’oeil effect. An element common to all pictures in this exhibition is what appears to be thread tufts or tassels that are sewn in the quilts that Noonan uses, these appear to dance on the surface of the pictures almost like Memphis patterns creating a stark but shallow depth.

At the heart of Noonan’s oeuvre lies a poetic sensibility towards atmosphere and mood. As Noonan himself has said: ‘I’m trying to touch on a certain atmosphere or tone… when you’re listening to music, particular songs or artists will have a particular atmosphere to their work. That’s what I’m trying to achieve with pictures, to give the piece an ambience that you can’t exactly pin down, but that sets a certain tone. I like to think of them as these little hermetic things that have a certain energy or atmosphere that can wash over you, affecting your mood. I don’t want to spell something out; my pieces are more about evoking something in a viewer.’
David Noonan (b. 1969, Ballarat, Australia) lives and works in London. Recent solo exhibitions include the Contemporary Art Museum, St. Louis, Missouri, USA (2011), the Australian Centre for Contemporary Art, Melbourne (2009), the Chisenhale Gallery, London (2008) and the Palais de Tokyo, Paris (2007). In 2009, his work was included in the group show Altermodern, as part of the Tate Triennial, Tate Britain, London (2009). JRP/Ringier published two publications, a monograph (2012) and Scenes, an artist book in 2009.